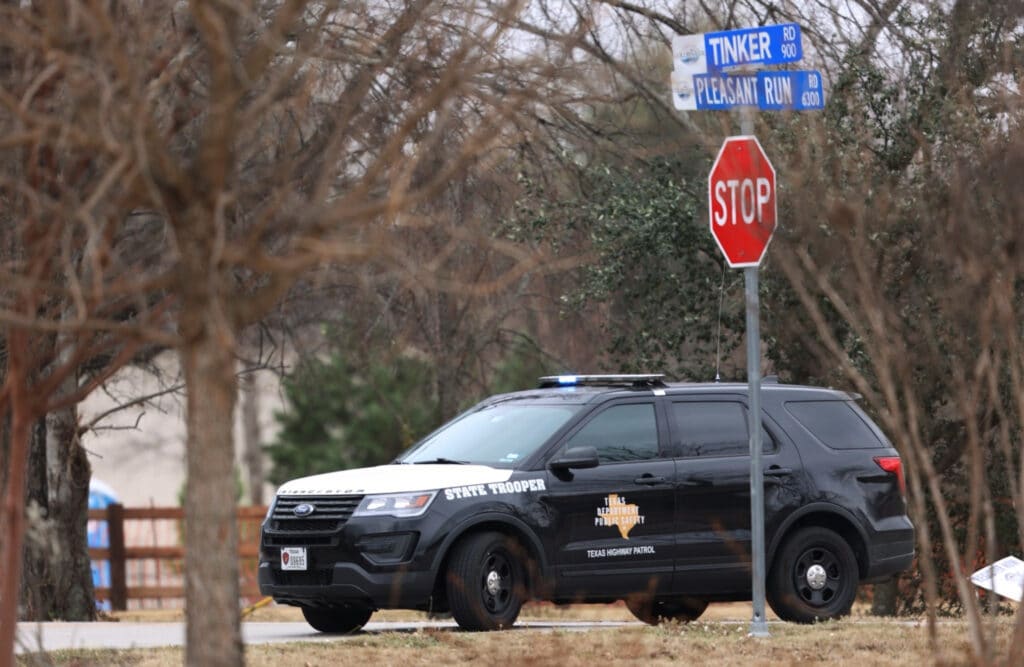 At least four hostages are believed to be held against their will by one man in a Texas synagogue, as initial reports are coming in Saturday, the serious situation is still unfolding. One hostage has been released uninjured, the Colleyville Police department said, but the others are still believed to be inside with the suspect, and their conditions are not known. As reported by the AP:

Colleyville Police authorities are still trying to discern a precise motive for the attack, that started during Saturday services

COLLEYVILLE, Texas (AP) — Authorities said a man took hostages Saturday during services at a Texas synagogue where the suspect could be heard ranting in a livestream and demanding the release of a Pakistani neuroscientist who was convicted of trying to kill U.S. Army officers in Afghanistan.

At least four hostages were initially believed to be inside the synagogue, according to two law enforcement officials who were not authorized to discuss the ongoing investigation and who spoke to The Associated Press on the condition of anonymity. The synagogue’s rabbi was believed to be among the hostages, one of the officials said. A law enforcement official said the man claimed to be armed but authorities have not confirmed whether he is.

The Colleyville Police Department said one hostage was released uninjured shortly after 5 p.m. Saturday. The man was expected to be reunited with his family and did not require medical attention.

Authorities are still trying to discern a precise motive for the attack. The hostage-taker was heard demanding the release of Aafia Siddiqui, a Pakistani neuroscientist suspected of having ties to al-Qaeda, who was convicted of trying to kill U.S. military officers while in custody in Afghanistan, the officials said. He also said he wanted to be able to speak with her, according to the officials. Siddiqui is in federal prison in Texas.

The officials said investigators have not positively identified the man and cautioned that the information was based on a preliminary investigation as the situation was still rapidly developing.

Police were first called to the synagogue around 11 a.m. and people were evacuated from the surrounding neighborhood soon after that, FBI Dallas spokesperson Katie Chaumont said. There have been no reported injuries, Chaumont said.

“It’s an evolving situation, and we have a lot of law enforcement personnel on scene,” Chaumont said.

The services were being livestreamed on the synagogue’s Facebook page for a time. The Fort Worth Star-Telegram reported that an angry man could be heard ranting and talking about religion at times during the livestream, which didn’t show what was happening inside the synagogue.

Shortly before 2 p.m., the man said, “You got to do something. I don’t want to see this guy dead.” Moments later, the feed cut out. A Meta company spokesperson later confirmed that Facebook removed the video.

Multiple people heard the hostage-taker refer to Siddiqui as his “sister” on the livestream, but Faizan Syed, the executive director of Council on American-Islamic Relations in Dallas Fort-Worth Texas, told The Associated Press that Siddiqui’s brother, Mohammad Siddiqui, was not involved. Syed said CAIR’s support and prayers were with the people being held in the synagogue.

Texas resident Victoria Francis told the AP that she watched about an hour of the livestream before it cut out. She said she heard the man rant against America and claim he had a bomb.

“He was just all over the map. He was pretty irritated and the more irritated he got, he’d make more threats, like ‘I’m the guy with the bomb. If you make a mistake, this is all on you.’ And he’d laugh at that,” she said. “He was clearly in extreme distress.”

Francis, who lives in Rhome, Texas and grew up near Colleyville, tuned in after she read about the hostage situation. She said it sounded like the man was talking to the police department on the phone, with the rabbi and another person trying to help with the negotiations.

When the livestream cut out, the man was getting pretty irate, Francis said.

“It’s a scary situation. I’m hopeful it ends the best way it can, obviously with no one hurt,” she said. “Especially in this area, you never think something like this is going to hit home until it does.”

Colleyville, a community of about 26,000 people, is about 15 miles (23 kilometers) northeast of Fort Worth.

Israeli Prime Minister Naftali Bennett said he was monitoring the situation closely. “We pray for the safety of the hostages and rescuers,” he wrote on Twitter.

“This latest antisemitic attack at a house of worship is an unacceptable act of evil,” CAIR National Deputy Director Edward Ahmed Mitchell said in a statement. “We stand in solidarity with the Jewish community, and we pray that law enforcement authorities are able to swiftly and safely free the hostages. No cause can justify or excuse this crime.”

Siddiqui, a Pakistani neuroscientist with advanced degrees from Brandeis University and the Massachusetts Institute of Technology, was sentenced in 2010 to 86 years in prison on charges that she assaulted and shot at U.S. Army officers after being detained in Afghanistan two years earlier. The punishment sparked outrage in Pakistan among political leaders and her supporters, who viewed her as victimized by the American criminal justice system.

In the years since, Pakistan officials have expressed interest publicly in any sort of deal or swap that could result in her release from U.S. custody, and her case has continued to draw attention from supporters. In 2018, for instance, an Ohio man who prosecutors say planned to fly to Texas and attack the prison where Siddiqui is being held in an attempt to free her was sentenced to 22 years in prison.