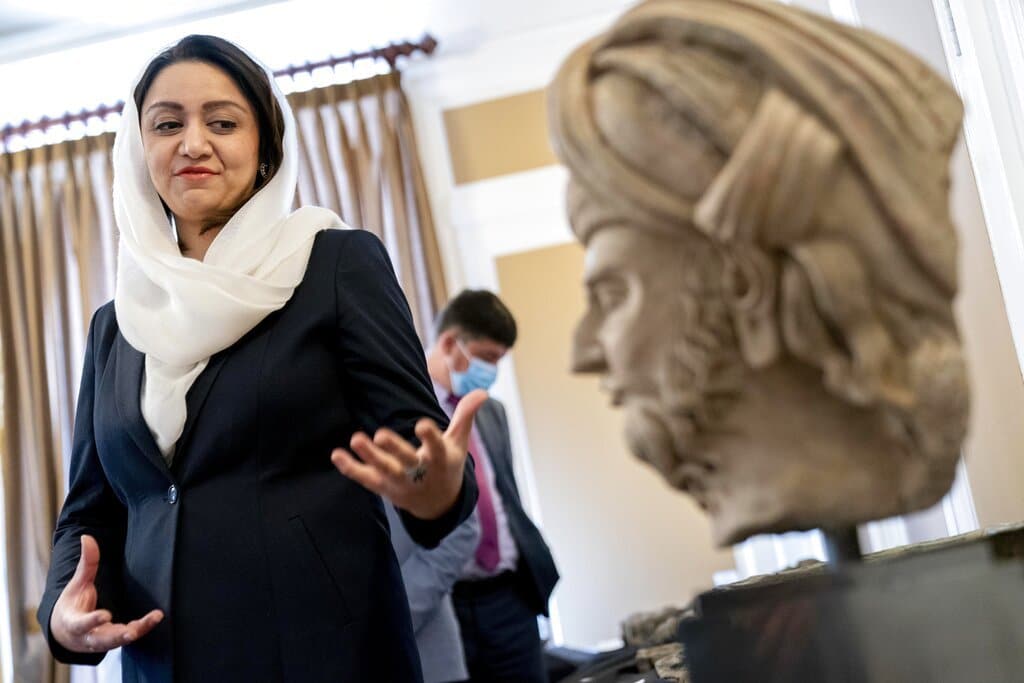 Valuable artifacts have been seized from a prolific antiquities smuggler located in New York City. A collection of 33 of them came from Afghanistan, and will be returned to the country this week. The Associated Press has the story:

WASHINGTON (AP) — Precious relics of Afghanistan’s ancient past are returning home as the nation confronts deepening uncertainty about its future.

A collection of 33 artifacts seized from a New York-based art dealer who authorities say was one of the world’s most prolific smugglers of antiquities was turned over by the U.S. to the government of Afghanistan this week.

“The significance of the material is huge,” Roya Rahmani, the country’s ambassador to the U.S., said Wednesday. “Each one of these pieces are priceless depictions of our history.”

Rahmani formally took control of the collection in a ceremony Monday in New York with the Manhattan District Attorney’s office and Homeland Security Investigations, which recovered the artifacts as part of a larger investigation into the trafficking of antiquities from a number of countries.

Now, after briefly being displayed at the embassy in Washington, the masks, sculptures and other items, some from the second and third centuries, are en route to Kabul, where they are expected to go on display at the National Museum.

It’s the same museum where members of the Taliban destroyed artifacts in 2001 as part of a cultural rampage rooted in a fundamentalist version of Islam in which depictions of the human form are considered offensive.

The Taliban is now out of power. But it controls much of the country outside of Kabul amid stalled talks with the government and the looming withdrawal of U.S. and NATO forces after two decades of war. Rahmani concedes it’s a delicate time.

“However, what I know is that our security forces are determined to defend our people,” she said in an interview with The Associated Press. “The government is committed to do its part for peace and stability in a way that would bring durable peace.”

They may get a chance earlier than expected. Germany’s Defense Ministry said Wednesday that discussions are underway among military planners with the NATO-led Resolute Support Mission in Kabul for a possible withdrawal of international troops from Afghanistan as early as July 4.

President Joe Biden has already said the U.S. would remove all its troops by Sept. 11, the 20th anniversary of the attacks that prompted the American invasion to dislodge the Taliban in 2001 for allowing al-Qaida to operate from Afghanistan.

Before the Sept. 11 attacks, the Taliban had already become internationally notorious for enforcing a harsh form of Islamic law that kept women out of public view and for destroying — with rockets, shells and dynamite — the famed giant, sixth century sandstone Buddha statues built into a cliff in Bamiyan province.

The destruction of the statues was on the ambassador’s mind as she prepared to ship the artifacts to her homeland, not only because a mural of the sandstone Buddhas adorns the room at the embassy where visitors gathered this week to see the relics.

Rahmani, her country’s first female ambassador to the United States, recalls that she wept when she first learned what the Taliban had done to the Buddhas. It was an important moment, she says, because she had pledged never to let anyone see her cry as a way to defy the male-dominated culture of her homeland.

In contrast, the items are “returning to a government and people who cherish their past” and will make sure they are preserved for future generations, Rahmani said. She doesn’t expect the Taliban, if they return to power, would dare to destroy them.

Like the statues, some of the recovered antiquities depict Buddha. There’s also a marble statue of Shiva and a Greek mask. The artifacts reflect the multicultural influences on Afghanistan, an important center of trade and commerce, according to Fredrik Hiebert, an archaeologist and National Geographic Fellow who studies the country.

There are at least 2,600 archaeological sites around the country, said Hiebert, who helped authenticate some of the items after they had been confiscated by federal agents and discuss the relics at a gathering Tuesday at the embassy.

“Afghanistan is one of the richest countries in archaeology and history in the world,” he said. And there’s very good reason, of course. For 6,000 years there’s been civilization based in Afghanistan.”

That also makes it an attractive target to looters, which is how the items eventually ended up in the United States.

In 2007, Homeland Security Investigations, an agency that deals with cases of smuggling that traverse international borders, received information about looted artifacts brought to the New York City area from India.

It eventually led to the indictment of a New York art gallery owner, Subhash Kapoor, and seven others as well as the seizure of more than 2,600 artifacts, valued at more than $140 million. He is jailed in India on charges and faces extradition to the U.S. when that case is resolved.

In the meantime, the U.S. government is working to repatriate the looted material, much of which was found in a series of raids on storage units in the New York City area.

They have already returned relics to Nepal and Sri Lanka and soon will turn over artifacts to Thailand, said Stephen Lee, the supervisor special agent in charge of HSI’s cultural property, arts and antiquities unit. The 33 items being sent to Afghanistan, valued at around $1.8 million, are the first to go back there as part of this investigation.

“They belong to the people of Afghanistan,” Lee said. “That’s their cultural history.”