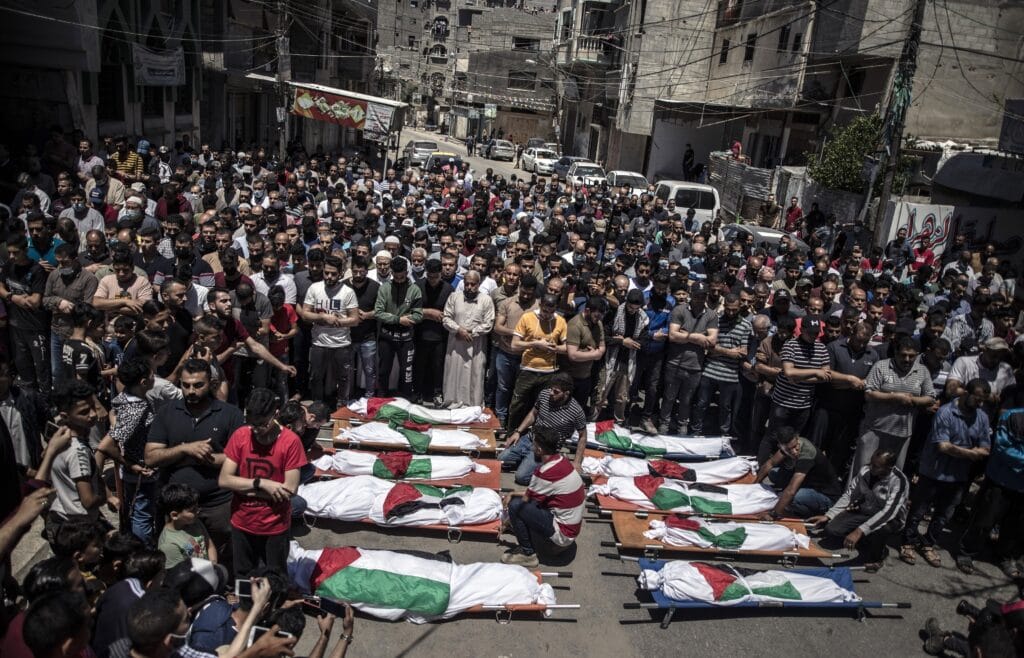 Complicating their governments’ recent efforts to normalize ties with Israel, protesters in Gulf Arab states are loudly speaking up against Israel’s role in the conflict that began this year with Gaza. Much of it is taking place on social media, which is flooded with photos of Palestinian children harmed in the conflict. The Associated Press has the story:

DUBAI, United Arab Emirates (AP) — The ongoing bloodshed in the Gaza Strip has unleashed a chorus of voices across Gulf Arab states that are fiercely critical of Israel and emphatically supportive of Palestinians.

The vocal opposition to Israel, expressed in street protests, on social media and in newspaper columns, comes just months after pacts were signed to establish ties with Israel — and complicates government efforts to rally Arab citizens around full-throttle acceptance of the deals.

Analysts said the conflict will also set back Israeli efforts to secure more normalization deals with other Arab states, like Saudi Arabia.

The criticism has not only put Arab governments that signed the diplomatic accords with Israel in a difficult position with their citizens, it also affirms that the Palestinian cause continues to resonate deeply with people across the Middle East.

Still, the open calls for Palestinian rights and condemnation of Israel voiced by countless Gulf Arab citizens have largely mirrored official statements from their governments, all of which have condemned the violence in some form. Some have gone further, and Abdulla said he’d hoped the United Arab Emirates’ most recent statement calling “on all parties” to cease fighting had been bolder and named Israel as the aggressor.

In speaking out, Gulf citizens are challenging the official narratives around normalization with Israel.

Related: Demonstrators in Major US Cities Decry Airstrikes Over Gaza

In Bahrain, civil society groups signed a letter urging the government to expel the Israeli ambassador. In Kuwait, protesters held two rallies and are demanding permission to hold more. In Qatar, the government allowed hundreds to protest over the weekend as Hamas’ top leader delivered a speech. In the UAE, some have openly donned the black-and-white checkered Palestinian keffiyeh on Instagram while others have tweeted under hashtags supportive of Palestinians.

Last year, the UAE became the first Arab country in over two decades to establish ties with Israel, after Egypt and Jordan in 1979 and 1994, respectively. It was a brazen move that bypassed the Palestinians, who slammed it as treason and a stab in the back.

The UAE’s move paved the way for three other countries — Bahrain, Sudan and Morocco — to announce similar pacts with Israel in rapid succession.

Immediately after the UAE formalized ties with Israel in September, a tsunami of state propaganda framed it as a new era of peace, religious tolerance and security for the region.

Among the general Emirati public, there was little to no visible pushback from citizens when their government announced ties with Israel. Fiery nationalistic figures on Twitter with tens of thousands of followers aggressively cheered the pact, and throughout the current conflict have both defended ties with Israel and made posts mocking Palestinian protesters.

But unlike in Western democracies, a lack of protest in the Gulf does not mean acceptance. In the UAE, political parties are banned and political expression is heavily suppressed.

Related: Who are America’s Friends in the Arab World?

“But that doesn’t mean we feel comfortable by what’s happening around us,” she said.

She changed her Twitter handle in support of Palestinians since the fighting broke out, and has used the platform to slam Israel’s policies and highlight the atrocities of the war.

“You don’t sign papers and expect a human catastrophe to go away,” she said of the accord with Israel.

UAE has rejected youth or Islamic movements in recent years

Over the years, there have been changes to school curricula across Gulf Arab states to replace pan-Arab and pan-Islamic ideals with a nationalistic identity that unites people around the flag.

The UAE has been trying to mold public discourse around nationalism and a rejection of youth or Islamic movements, said Kristin Smith Diwan, a scholar at the Arab Gulf States Institute in Washington.

“I think the relation with Israel was seen as a way to even cement that further. I don’t know how that’s going to work now,” she said.

Al-Hussein said her younger brother, who is in his 20s, never studied the Arab-Israeli conflict in school. But he “just learned about it today from social media,” she said.

For millions of Arabs, social media is the only space where limited freedom of expression is possible. Since the war began, users have been flooded by images of dead Palestinian children being pulled from the rubble of Israeli airstrikes in Gaza.

These platforms have also been awash with images of Israeli security forces firing stun grenades and tear gas at worshippers and protesters in Al-Aqsa mosque in Jerusalem, of Palestinian families fighting eviction from their homes and of deadly protests across the occupied West Bank.

Bader al-Saif, a Kuwait University professor, said “the sheer un-proportionality” of the conflict has pushed many people to speak out across the Gulf.

“For Israelis to feel secure, they need to feel that they are accepted,” al-Saif said. “That feeling of acceptance cannot be complete without them dealing with the Palestinian issue.”

U.K.-based Saudi scholar Madawi Al-Rasheed, a fierce critic of the Saudi government, said despite the kingdom’s widespread crackdown on activists — most of whom are steadfast supporters of Palestinian rights — the outrage expressed by many online reveals the gap between the cautious push by the Saudi leadership to inch closer to Israel and public sentiment in the streets.

“It shows that despite several years of adopting a normalization discourse in official Saudi media, the pulse of the people is actually not diverted from the Palestinian cause,” she said.