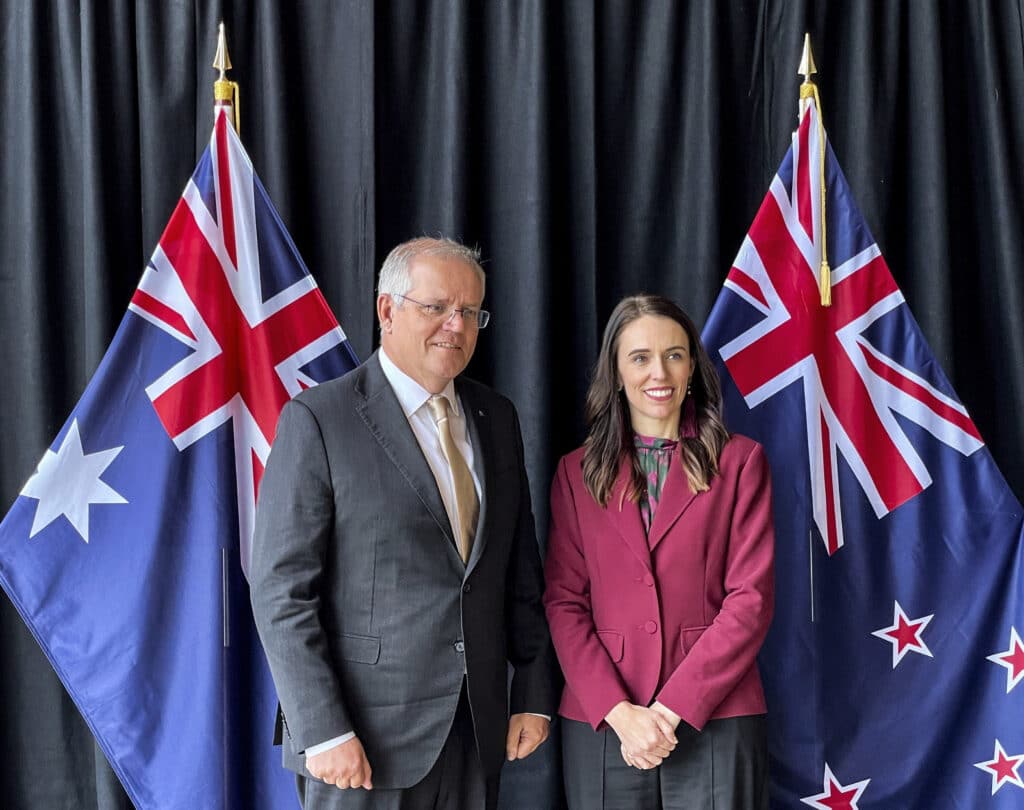 WELLINGTON, New Zealand (AP) — The leaders of New Zealand and Australia downplayed their differences over China and urged more investigation into the origin of the coronavirus Monday after their first face-to-face meeting in more than a year.

Australian Prime Minister Scott Morrison met with his New Zealand counterpart, Jacinda Ardern, in the tourist resort of Queenstown. Morrison was the first major world leader to visit New Zealand since both countries closed their borders last year to keep out the virus.

Australia has taken a hard stance against China in recent years and the relationship between the nations has deteriorated. New Zealand has opted for a more diplomatic approach at times, which some say is too soft.

But Morrison said he and Ardern had similar philosophies.

“Australia and New Zealand are trading nations,” Morrison said. “But neither of us would ever trade our sovereignty or trade our values. We have stood side-by-side to defend and protect and promote these values. Not just on the beaches of Gallipoli but in Afghanistan and so many other places around the world.”

Ardern said New Zealand maintained a strong and principled stance toward China on human rights and trade, and its positions were very similar to Australia’s.

She said New Zealand remains a committed member of the Five Eyes intelligence-sharing alliance with Australia, the U.S., Britain and Canada.

“That is not in question, not in doubt,” she said.

The two were guilty of “seriously violating international law and basic norms of international relations, and grossly interfering in China’s internal affairs,” Wang said at a daily briefing.

Morrison said Australia works closely with New Zealand in the Five Eyes partnership and many other international forums.

“I think as great partners, friends, allies, indeed family, there will be those far from here who would seek to divide us,” Morrison said. “And they will not succeed.”

Morrison said it was self-evident there was increased strategic competition between the U.S. and China but that didn’t need to lead to conflict.

Both leaders said they hope the World Health Organization will continue its investigation into the origins of the pandemic.

“It’s got nothing to do with global politics,” Morrison said. “This has nothing to do with anything other than ensuring that the global pandemic, which has caused such havoc around the world, stealing lives and livelihoods, that we understand how this occurred so we can do everything we possibly can to ensure that it does not happen again.”

New Zealand and Australia opened a quarantine-free travel bubble last month, allowing Morrison’s visit to take place. Both leaders said the next logical step in the gradual reopening of their borders would be to expand the bubble to include some other South Pacific island nations.

The two leaders also indicated that Australian white supremacist Brenton Tarrant, who two years ago slaughtered 51 worshippers at two mosques in Christchurch, New Zealand, would continue serving his sentence of life without parole in New Zealand.

Ardern said the guidance on where he should be imprisoned needed to come from survivors and loved ones, and the informal feedback she’d received from them was in favor of him staying in New Zealand.

“And I understand that,” Ardern said. “There’s something about the proximity in ensuring that the sentence that was handed down is served.”

Morrison said he, too, wanted to respect the wishes and interests of those affected.