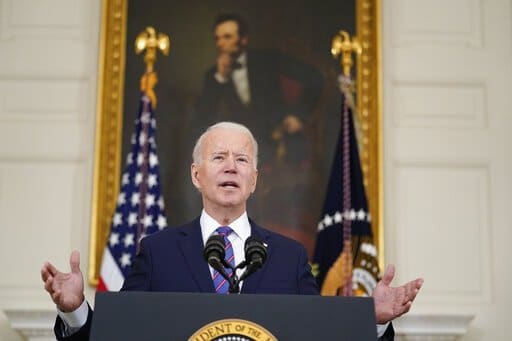 After reports of Russian troops moving on Ukraine’s border, President Joe Biden placed a call to Ukrainian President Volodymyr Zelenskiy affirming his support for Ukraine. Tensions have been escalating between Russia and the U.S. since Biden took office. The Associated Press has the story:

After reports of troop movement on the Ukrainian border, Biden calls Ukrainian president

President Joe Biden underscored U.S. support for Ukraine on Friday in his first call to that country’s leader following reports of Russian troop movements on its eastern border.

Biden in his conversation with Ukrainian President Volodymyr Zelenskiy affirmed “unwavering support for Ukraine’s sovereignty and territorial integrity in the face of Russia’s ongoing aggression,” according to a statement from the White House.

The United States and Ukraine say Russia is escalating tensions in eastern Ukraine, where Russia-backed separatists have been fighting Ukrainian forces since 2014. Russia denies having a military presence there.

The Pentagon this week accused Russia of violating a 2020 ceasefire, including in a March 26 clash that killed four Ukrainian soldiers. Ukraine’s military blamed a Russian mortar attack.

Zelenskiy said in a tweet after the call that Ukraine and the United States “stand shoulder to shoulder when it comes to preservation of our democracies.” He called the partnership with Americans “crucial” for Ukrainians.

President Donald Trump had emphasized a close relationship with Russian President Vladimir Putin, and resisted calls to press Russia over its interference in the United States and other countries, including Ukraine. Biden has publicly rebuked Putin since taking office, including saying last month he regarded Putin as a “killer.”

Russia recalled its ambassador to the United States after that, and Russian Foreign Minister Sergey Lavrov kept up Russia’s complaints about Biden’s comments this week, saying Russia’s relations with the United States and its allies have “hit the bottom.”