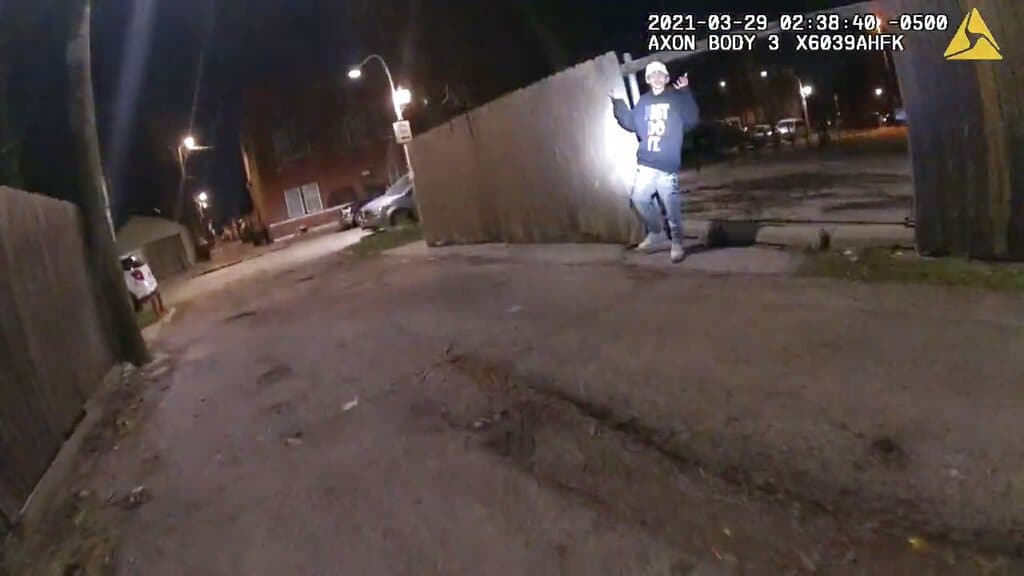 Rocked by recent high-profile police shootings of minorities, Chicago is now in the spotlight again after video was released showing a Chicago police offer fatally shooting a 13-year-old Hispanic boy. The boy dropped his gun and put his hands in the air before the police officer shot him. The Associated Press has the story:

CHICAGO (AP) — Viewers reacted with a mix of outrage and grief to newly released bodycam video that showed a Chicago police officer fatally shoot a 13-year-old last month less than a second after the boy appeared to drop a handgun, turn toward the officer and begin raising his hands.

Amid renewed appeals for policing reform, some called for the officer who shot Adam Toledo to be charged or fired. But for others, the footage released Thursday showed how difficult such decisions might be for prosecutors and police higher-ups, with an officer making a split-second decision after chasing a suspect down a dark alley while responding to a report about gunshots.

The killing of Toledo, who was Latino, by Officer Eric Stillman, who is white, adds to already-heightened tension over policing in Chicago and elsewhere in the U.S., particularly in Black and Latino communities. The videos and other investigative materials were released at the same time as the trial in Minneapolis of former Officer Derek Chauvin in the death of George Floyd and the recent police killing of another Black man, Daunte Wright, in one of that city’s suburbs.

In Chicago, a demonstration was planned for Friday to call for “Justice for Adam Toledo,” after small groups of protesters gathered at a police station and marched downtown Thursday night. Some downtown businesses have boarded up their windows in the expectation there could be unrest, though the Thursday protest was peaceful.

“The community is outraged and the family is in pain over what we now know was an unnecessary taking of their loved one’s life,” said Maggie Rivera, who heads the Illinois chapter of the League of United Latin American Citizens, which called for Stillman to be fired. “… This video clearly shows Adam was not a threat to the officer at that very moment when the trigger was pulled. Communities of color in Chicago are tired of the aggressiveness of some law enforcement officers and you can see it firsthand in this video.”

Whether Stillman is charged is up to the Cook County state’s attorney’s office, which will get the Civilian Office of Police Accountability’s report after the independent board completes its investigation.

Stillman was responding with other officers to reports of shots fired in Little Village, a predominantly Hispanic neighborhood of the city’s southwest side, at around 3 a.m. on March 29. Nineteen seconds elapsed from when Stillman got out of his squad car to when he shot Toledo. His jumpy, nighttime bodycam footage shows him chasing Toledo on foot down an alley for several seconds and yelling “Police! Stop! Stop right (expletive) now!”

As the teen slows down, Stillman yells “Hands! Hands! Show me your (expletive) hands!”

Toledo then turns toward the camera, Stillman yells “Drop it!” and midway between repeating that command, he opens fire and Toledo falls down. While approaching the wounded boy, Stillman radios in for an ambulance. He can be heard imploring Toledo to “stay awake,” and as other officers arrive, an officer says he can’t feel a heartbeat and begins administering CPR.

Police say the boy had a handgun on him before the shooting, and Stillman’s footage shows him shining a light on a handgun on the ground near Toledo after he shot him.

But Adeena Weiss-Ortiz, an attorney for Toledo’s family, told reporters the bodycam footage and other videos “speak for themselves.” She said it’s irrelevant whether Toledo was holding a gun before he turned toward the officer.

“If he had a gun, he tossed it,” she said. “The officer said, ‘Show me your hands.” He complied. He turned around.”

In addition to posting Stillman’s bodycam footage, the review board released footage from other bodycams, four third-party videos, two audio recordings of 911 calls, and six audio recordings from ShotSpotter, the technology that led police to respond to the sound of gunshots that morning.

Toledo and a 21-year-old man fled on foot when confronted by police. The man, Ruben Roman, was arrested on a misdemeanor charge of resisting arrest but was later charged with felonies including the reckless discharge of a firearm, illegal use of a weapon by a felon and child endangerment. He was ordered held on $150,000 bond.

Right after the shooting, people in the community started calling on the review board to release any bodycam footage of it. The Chicago Police Department has a long history of brutality and racism that has fomented mistrust among the city’s many Black and Latino residents. And the city has a history of suppressing damning police videos, including its efforts to prevent the release of footage of the 2014 killing of Laquan McDonald by a white officer who was eventually convicted of murder and of a botched 2019 raid in which an innocent, naked, Black woman wasn’t allowed to put on clothes until after she was handcuffed.

The review board, which investigates all shootings in Chicago involving police, initially said it couldn’t release the video because it showed the shooting of a minor. But it changed course after the mayor and police superintendent asked for its release.

Lucky Camargo, an activist and lifelong resident of Little Village, said she decided not to watch the video, but that neighbors described it to her as “an execution.”

“This was wrong,” she said. “I didn’t need to watch the video to make that assessment on my own. I don’t feel there was any justification to shoot someone.”

Before the latest video’s release, some businesses in downtown Chicago’s “Magnificent Mile” shopping district boarded up their windows. Lightfoot said the city has been preparing for months for a verdict in the Chauvin trial and that it had activated a “neighborhood protection plan” ahead of Thursday’s release.

“It happens now that these circumstances are sitting next to each other,” she said.

Adam’s mother described him as a curious and goofy seventh grader who loved animals, riding his bike and junk food. The Toledo family issued a statement urging people to avoid violent protests.

“We pray that for the sake of our city, people remain peaceful to honor Adam’s memory and work constructively to promote reform,” the family said.