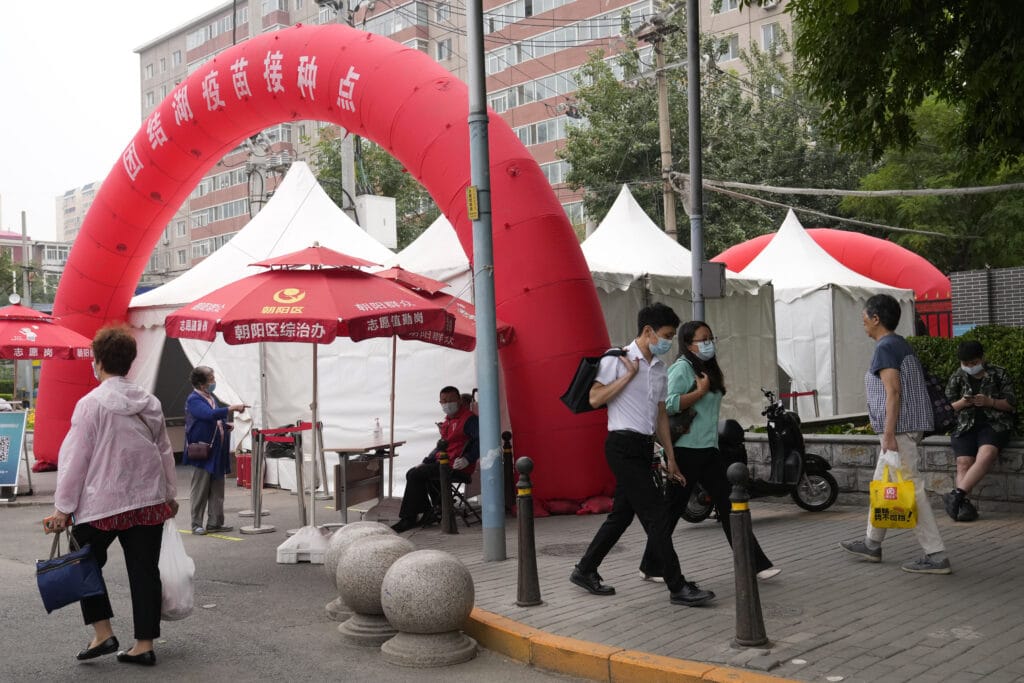 Although China started out slow to distribute the COVID-19 vaccine, it has turned things around, giving out 100 million shots in just five days last month. The nation has now given out more than 704 million doses. The Associated Press has the story:

China distributes a third of all COVID-19 vaccines worldwide

After a slow start, China is now doing what virtually no other country in the world can: leveraging the power and all-encompassing reach of its one-party system and a maturing domestic vaccine industry to administer shots at a staggering pace. The rollout is far from perfect, including uneven distribution, but Chinese public health leaders now say they’re hoping to inoculate 80% of the population of 1.4 billion by the end of the year.

As of Wednesday, China had given out more than 704 million doses — with nearly half of those in May alone. China’s total is roughly a third of the 1.9 billion shots distributed globally, according to Our World in Data, an online research site.

The call to get vaccinated comes from every corner of society. Companies offer shots to their employees, schools urge their students and staffers, and local government workers check on their residents.

That pressure underscores both the system’s strength, which makes it possible to even consider vaccinating more than a billion people this year, but also the risks to civil liberties — a concern the world over but one that is particularly acute in China, where there are few protections.

“The Communist Party has people all the way down to every village, every neighborhood,” said Ray Yip, former country director for the Gates Foundation in China and a public health expert. “That’s the draconian part of the system, but it also gives very powerful mobilization.”

China is now averaging about 19 million shots per day, according to Our World in Data’s rolling seven-day average. That would mean a dose for everyone in Italy about every three days. The United States, with about one-quarter of China’s population, reached around 3.4 million shots per day in April when its drive was at full tilt.

It’s still unclear how many people in China are fully vaccinated — which can mean anywhere from one to three doses of the vaccines in use — as the government does not publicly release that data.

Zhong Nanshan, the head of a group of experts attached to the National Health Commission and a prominent government doctor, said on Sunday that 40% of the population has received at least one dose, and the aim was to get that percentage fully vaccinated by the end of the month.

In Beijing, the capital, 87% of the population has received at least one dose. Getting a shot is as easy as walking into one of hundreds of vaccination points found all across the city. Vaccination buses are parked in high foot-traffic areas, including in the city center and at malls.

But Beijing’s abundance is not shared with the rest of the country, and local media reports and complaints on social media show the difficulty of getting an appointment elsewhere.

“I started lining up that day at 9 in the morning, until 6 p.m., only then did I get the shot. It was exhausting,” Zhou Hongxia, a resident of Lanzhou, in northwestern Gansu province, explained recently. “When I left, there were still people waiting.”

Zhou’s husband hasn’t been so lucky and has yet to get a shot. When they call the local hotlines, they are told simply to wait.

China has even focused on vaccinating its citizens abroad, donating vaccine s to Thailand, some of which were used to inoculate its nationals before most Thais received their doses. Globally, it has vaccinated more than 500,000 overseas citizens under what it calls the “Spring Sprout” program.

Before the domestic campaign ramped up in recent weeks, many people were not in a rush to get vaccinated as China has kept the virus, which first flared in the country, at bay in the past year with strict border controls and mandatory quarantines. It has faced small clusters of infections from time to time, and is currently managing one in the southern city of Guangzhou.

No problems expected with scale

Although there are distribution issues, it is unlikely that Chinese manufacturers will have problems with scale, according to analysts and those who have worked in the industry.

Sinovac and Sinopharm, which make the majority of the vaccines being distributed in China, have both aggressively ramped up production, building brand new factories and repurposing existing ones for COVID-19. Sinovac’s vaccine and one of the two Sinpharm makes have received an emergency authorization for use from the World Health Organization, but the companies, particularly Sinopharm, have faced criticism for their lack of transparency in sharing their data.

“What place in the world can compare with China on construction? How long did it take our temporary hospitals to be built?” asked Li Mengyuan, who leads pharmaceutical research at Western Securities, a financial firm. China built field hospitals at the beginning of the pandemic in just days.

Government support has been crucial for vaccine developers every step of the way — as it has in other countries — but, as with everything, the scope and scale in China is different.

Yang Xiaoming, chairman of Sinopharm’s China National Biotec Group, recounted to state media recently how the company initially needed to borrow lab space from a government research center while it was working on a vaccine.

“We sent our samples over, there was no need to discuss money, we just did it,” he said.

Chinese vaccine companies also largely do not rely on imported products in the manufacturing process. That’s an enormous benefit at a time when many countries are scrambling for the same materials and means China can likely avoid what happened to the Serum Institute of India, whose production was hobbled because of dependence on imports from the U.S. for certain ingredients.

But as the availability of the vaccine increases so, too, can the pressure to take it.

In Beijing, one researcher at a university said the school’s Communist Party cell calls him once a month to ask him if he has gotten vaccinated yet, and offers to help him make an appointment.

He has so far declined to get a shot because he would prefer the Pfizer vaccine, saying he trusts its data. He spoke on condition of anonymity because of concerns he could face repercussions at his job at a government university for publicly questioning the Chinese vaccines.

China has not yet approved Pfizer for use, and the researcher is not sure how long he can hold out — although the government has, for now, cautioned against making vaccines mandatory outright.

“They don’t have to say it is mandatory,” Yip, the public health expert, said. “They’re not going to announce that it’s required to have the vaccine, but they can put pressure on you.”