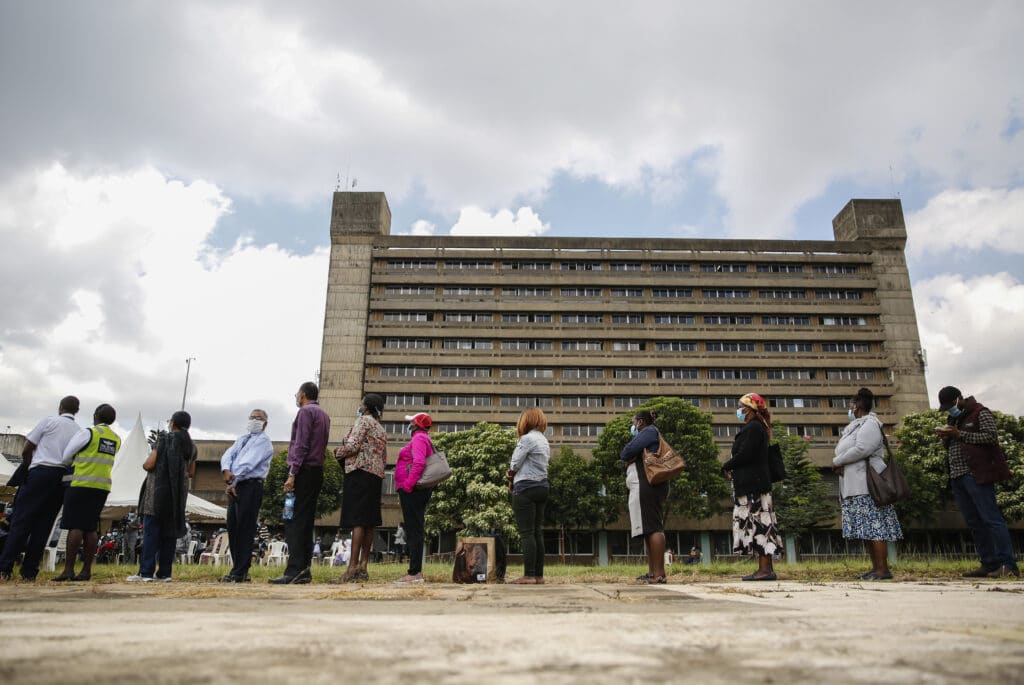 Vaccination numbers in African countries are terribly low, with less than 1% vaccinated in many countries. The WHO said vaccine shipments into Africa have ground to a “near halt.” The Associated Press has the story:

CAPE TOWN, South Africa (AP) — In the global race to vaccinate people against COVID-19, Africa is tragically at the back of the pack.

In fact, it has barely gotten out of the starting blocks.

In South Africa, which has the continent’s most robust economy and its biggest coronavirus caseload, just 0.8% of the population is fully vaccinated, according to a worldwide tracker kept by Johns Hopkins University. And hundreds of thousands of the country’s health workers, many of whom come face-to-face with the virus every day, are still waiting for their shots.

In Nigeria, Africa’s biggest country with more than 200 million people, only 0.1% are fully protected. Kenya, with 50 million people, is even lower. Uganda has recalled doses from rural areas because it doesn’t have nearly enough to fight outbreaks in big cities.

Chad didn’t administer its first vaccine shots until this past weekend. And there are at least five other countries in Africa where not one dose has been put into an arm, according to the Africa Centers for Disease Control and Prevention.

The World Health Organization says the continent of 1.3 billion people is facing a severe shortage of vaccine at the same time a new wave of infections is rising across Africa. Vaccine shipments into Africa have ground to a “near halt,” WHO said last week.

“It is extremely concerning and at times frustrating,” said Africa CDC Director Dr. John Nkengasong, a Cameroonian virologist who is trying to ensure some of the world’s poorest nations get a fair share of vaccines in a marketplace where they can’t possibly compete.

The United States and Britain, in contrast, have fully vaccinated more than 40% of their populations, with higher rates for adults and high-risk people. Countries in Europe are near or past 20% coverage, and their citizens are starting to think about where their vaccine certificates might take them on their summer vacations. The U.S., France and Germany are even offering shots to youngsters, who are at very low risk of serious illness from COVID-19.

Poorer countries had warned as far back as last year of this impending vaccine inequality, fearful that rich nations would hoard doses.

In an interview, Nkengasong called on the leaders of wealthy nations meeting this week at the G-7 summit to share spare vaccines — something the United States has already agreed to do — and avert a “moral catastrophe.”

“I’d like to believe that the G-7 countries, most of them having kept excess doses of vaccines, want to be on the right side of history,” Nkengasong said. “Distribute those vaccines. We need to actually see these vaccines, not just … promises and goodwill.”

Others are not so patient, nor so diplomatic.

“People are dying. Time is against us. This IS INSANE,” South African human rights lawyer Fatima Hasan, an activist for equal access to health care, wrote in a series of text messages.

The Biden administration made its first major move to ease the crisis last week, announcing it would share an initial batch of 25 million spare doses with desperate countries in South and Central America, Asia and Africa.

Nkengasong and his team were in contact with White House officials a day later, he said, with a list of countries where the 5 million doses earmarked for Africa could go to immediately.

Still, the U.S. offer is only a “trickle” of what’s needed, Hasan wrote.

Billionaire British philanthropist Mo Ibrahim, who was born in Sudan, added his voice to the issue, saying the pandemic-era phrase of “nobody is safe until everybody is safe” — often repeated by leaders of wealthy nations — would be meaningless until they shared their excess vaccines.

“They say that while they are hoarding the vaccine,” Ibrahim said. “Can you walk the talk? Stop just talking like parrots, you know, and do you really mean what you said?”

Africa alone is facing a shortfall of around 700 million doses, even after taking into account those secured through WHO’s vaccine program for poorer countries, COVAX, and a deal with Johnson & Johnson, which comes through in August, two long months away.

Uganda just released a batch of 3,000 vaccine doses in the capital, Kampala — a minuscule amount for a city of 2 million — to keep its program barely alive.

There and elsewhere, the fear is that the luck that somehow enabled parts of Africa to escape the worst of previous waves of COVID-19 infections and deaths might not hold this time.

“The first COVID was a joke, but this one is for real. It kills,” said Danstan Nsamba, a taxi driver in Uganda who has lost numerous people he knew to the virus.

In Zimbabwe, Chipo Dzimba embarked on a quest for a vaccine after witnessing COVID-19 deaths in her community. She walked miles to a church mission hospital, where there were none, and miles again to a district hospital, where nurses also had nothing and told her to go to the region’s main government hospital. That was too far away.

South African health workers faced similar disappointment when they crowded into a parking garage last month, hoping for vaccinations and ignoring in their desperation the social distancing protocols. Many came away without a shot.

Femada Shamam, who is in charge of a group of old-age homes in the South African city of Durban, has seen only around half of the 1,600 elderly and frail people she looks after vaccinated. It is six months, almost to the day, since Britain began the global vaccination drive.

“They do feel very despondent and they do feel let down,” Shamam said of her unvaccinated residents, who are experiencing “huge anxiety” as they hunker down in their sealed-off homes 18 months into the outbreak. Twenty-two of her residents have died of COVID-19.

“It really highlights the biggest problem … the haves and the have-nots,” Shamam said.

As for whether he’s confident wealthy countries with a surplus of vaccine have gotten the message, Nkengasong said: “I am hopeful, but not necessarily confident.”

AP writers around the world contributed to this report.