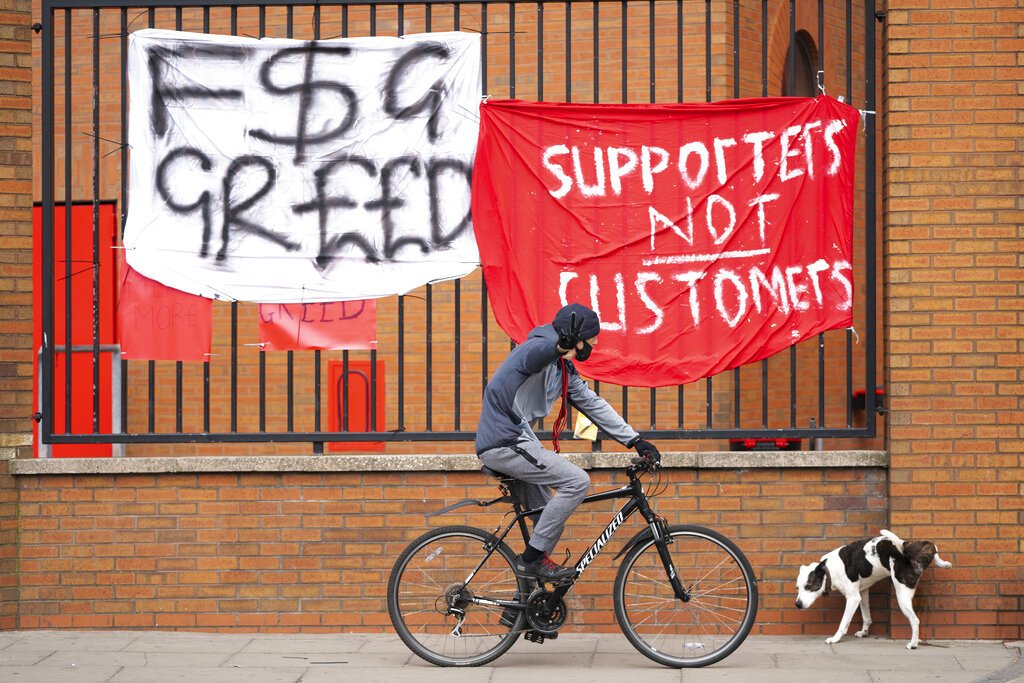 England will not be joining a closed league for soccer (known as football in Europe) similar to the teams in the U.S. Under pressure from the fans, the government, and even Prince William, the owners backed off, leaving Spain and Italy still attempting to make it work. The Associated Press has the story:

Even the apologies — on camera from Liverpool owner John Henry and in a letter from Manchester United co-owner Joel Glazer — couldn’t placate anger that their clubs tried to split to form a largely closed European competition.

Under a weight of pressure from supporters, the government and some of their players, the Premier League’s Big Six withdrew from the breakaway Tuesday night, imploding the project as the Spanish and Italian elite clung on.

“The cabal of billionaire owners overplayed their hand and their rapacious appetite for more united an unprecedented array of opponents,” the Football Supporters’ Association said.

The mutineers, who also included Arsenal, Chelsea, Manchester City and Tottenham, didn’t just fail to consult their supporters. Even players and coaching staff at the Premier League champions were left in the dark before the announcement on Sunday that they were quitting UEFA‘s Champions League structure to form the Super League.

“I’m sorry, and I alone am responsible for the unnecessary negativity brought forward over the past couple of days,” Henry told Liverpool fans in a video message.

Liverpool players publicly voiced their opposition in a wave of coordinated tweets on Tuesday night to intensify the pressure on Henry to keep the six-time European Cup winners within the long-standing, open competition.

Henry directly apologized to manager Jürgen Klopp and the staff.

“They were the most disrupted and unfairly so,” Henry said. “This is what hurts most.”

As owner of the Boston Red Sox, Henry hoped to import the American system of closed leagues into European football where it is an alien concept. Now he accepted he had to “rebuild trust” after letting down the fans.

“It’s something I won’t forget,” Henry said, “and shows the power the fans have today and will rightly continue to have.”

Outside Anfield, supporters felt Henry and his Fenway Sports Group need to do a lot more to get them back onside.

Being ignored is something Manchester United fans have grown used to in the 16 years that the Glazer family has owned the club. That made the open letter from Joel Glazer rare, acknowledging the deep wounds caused.

“In seeking to create a more stable foundation for the game, we failed to show enough respect for its deep-rooted traditions — promotion, relegation, the pyramid — and for that we are sorry,” he wrote about 10 hours after Henry’s video message was posted. “This is the world’s greatest football club and we apologize unreservedly for the unrest caused during these past few days.”

The Glazers, the owners of the NFL’s Tampa Bay Buccaneers, have faced plenty of anger from United fans before. Their leveraged takeover was forced through amid street protests after it saddled the club with debt that stands at 455.5 million pounds ($635 million).

“Like most United fans I do hope that the Glazers pack up and move on because most of us feel like they haven’t been good for the club at all,” United fan Mark Stembridge said outside Old Trafford, a stadium that is becoming dated due to a lack of investment. “Certainly all this with the Super League just underlines how they don’t really care at all about the club or its fans.”

There were calls from Arsenal fans for their American owner to also sell up. Club great Ian Wright has backed the calls to oust Stan Kroenke, who also owns the Los Angeles Rams. Arsenal posted a club statement on Tuesday apologizing for distressing supporters, but Kroenke has remained silent.

“He’s an investor, a franchise holder,” said Tim Payton, who heads the Arsenal Supporters’ Trust. “He’s not fit to be the owner.”

Payton and members of other fan groups and English football authorities met virtually on Tuesday with Prime Minister Boris Johnson, who had threatened to introduce laws to stop the Super League and protect clubs as community assets.

There had even been an intervention against the Super League on Monday by Prince William, who is president of the Football Association.

“I’m glad the united voice of football fans has been heard and listened to,” the second-in-line to the British throne said. “It is now really important that we use this moment to secure the future health of the game at all levels.”