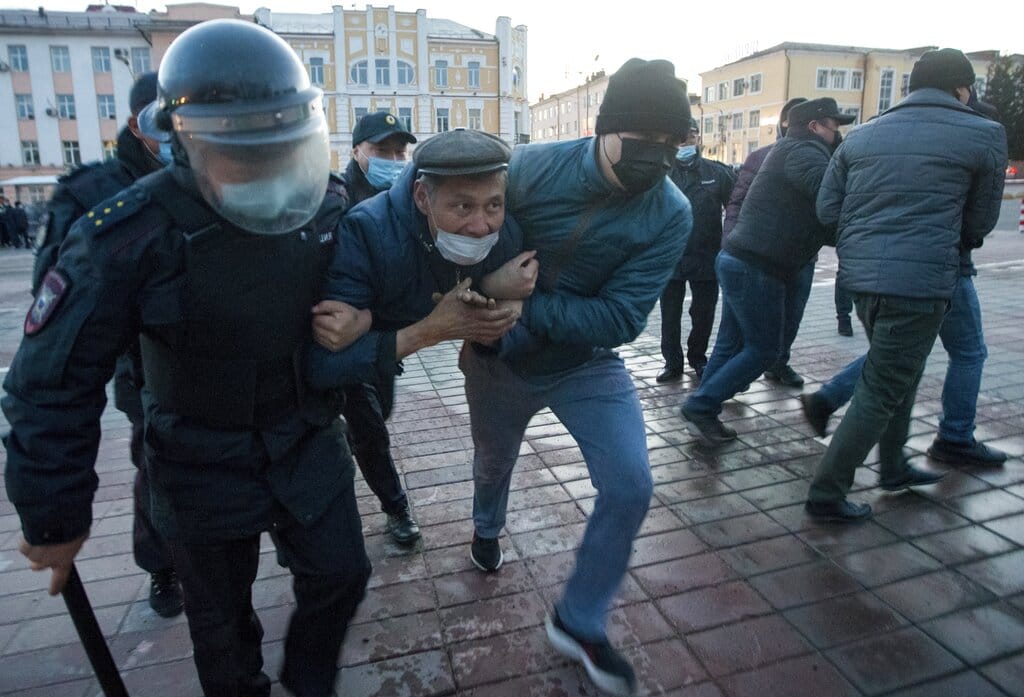 Imprisoned Russian opposition leader Alexei Navalny’s health continues to deteriorate he says, as Russian authorities refuse to allow him the medical care he needs. His supporters rallied on Wednesday to protest, resulting in the arrest of over 400. The Associated Press has the story:

MOSCOW (AP) — Thousands of supporters of imprisoned Russian opposition leader Alexei Navalny crowded into central Moscow on Wednesday as part of nationwide demonstrations calling for his freedom as his health reportedly is in severe decline while on a hunger strike.

Over 400 people were arrested across the country in connection with the protests, according to a human rights group that monitors political repression. Many were seized before the protests even began, including two top Navalny associates in Moscow.

Navalny’s team called for the unsanctioned demonstrations after weekend reports that his health is deteriorating.

“The situation with Alexei is indeed critical, and so we moved up the day of the mass protests,” Vladimir Ashurkov, a close Navalny ally and executive director of the Foundation for Fighting Corruption, told The Associated Press. “Alexei’s health has sharply deteriorated, and he is in a rather critical condition. Doctors are saying that judging by his test (results), he should be admitted into intensive care.”

Navalny’s organization called for the Moscow protesters to assemble on Manezh Square, just outside the Kremlin walls, but police blocked it off. Instead, a large crowd gathered at the nearby Russian State Library and another lined Tverskaya Street, a main avenue that leads to the square.

In St. Petersburg, police blocked off Palace Square, the vast space outside the Hermitage museum and protesters instead crowded along nearby Nevsky Prospekt.

There were no comprehensive reports of turnout throughout the country and it was unclear if the demonstrations would match the size and intensity of nationwide protests that broke out in January after Navalny, President Vladimir Putin’s most prominent opponent, was arrested.

Navalny’s team called the nationwide protests for the same day that Putin gave his annual state-of-the-nation address. In his speech, he denounced foreign governments’ alleged attempts to impose their will on Russia. Putin, who never publicly uses Navalny’s name, did not specify to whom the denunciation referred, but Western governments have been harshly critical of Navalny’s treatment and have called for his release.

In Moscow, Navalny spokeswoman Kira Yarmysh and Lyubov Sobol, one of his most prominent associates, were detained by police in the morning.

Yarmysh, who was put under house arrest after the January protests, was detained outside her apartment building when she went out during the one hour she is allowed to leave, said her lawyer, Veronika Polyakova. She was taken to a police station and charged with organizing an illegal gathering.

Sobol was removed from a taxi by uniformed police, said her lawyer, Vladimir Voronin.

OVD-Info reported that police searched the offices of Navalny’s organization in Yekaterinbrug and detained a Navalny-affiliated journalist in Khabarovsk.

In St. Petersburg, the State University of Aerospace Instrumentation posted a notice warning that students participating in unauthorized demonstrations could be expelled.

The 44-year-old Navalny was arrested in January upon his return from Germany, where he had spent five months recovering from a nerve agent poisoning he blames on the Kremlin. Russian officials have rejected the accusation.

Soon after, a court found that Navalny’s long stay in Germany violated the terms of a suspended sentence he was handed for a 2014 embezzlement conviction and ordered him to serve 2 1/2 years in prison .

Navalny began the hunger strike to protest prison officials’ refusal to let his doctors visit when he began experiencing severe back pain and a loss of feeling in his legs. The penitentiary service has said Navalny was getting all the medical help he needs.

Navalny’s physician, Dr. Yaroslav Ashikhmin, said recently that test results he received from Navalny’s family showed sharply elevated levels of potassium, which can bring on cardiac arrest, and heightened creatinine levels that indicate impaired kidneys and he “could die at any moment.”

On Sunday, he was transferred to a hospital in another prison and given a glucose drip. Prison officials rebuffed attempts by his doctors to visit him there.

Russian authorities have escalated their crackdown on Navalny’s allies and supporters. The Moscow prosecutor’s office is asking a court to brand Navalny’s Foundation for Fighting Corruption and his network of regional offices as extremist organizations. Human rights activists say such a move would paralyze the activities of the groups and expose their members and donors to prison sentences of up to 10 years.

Navalny’s allies vowed to continue their work despite the pressure.

“It is, of course, an element of escalation,” Ashurkov told the AP. “But I have to say we were able to regroup and organize our work despite the pressure before. I’m confident that now, too, we will find ways to work. … We have neither the intention nor the possibility to abandon what we’re doing.”