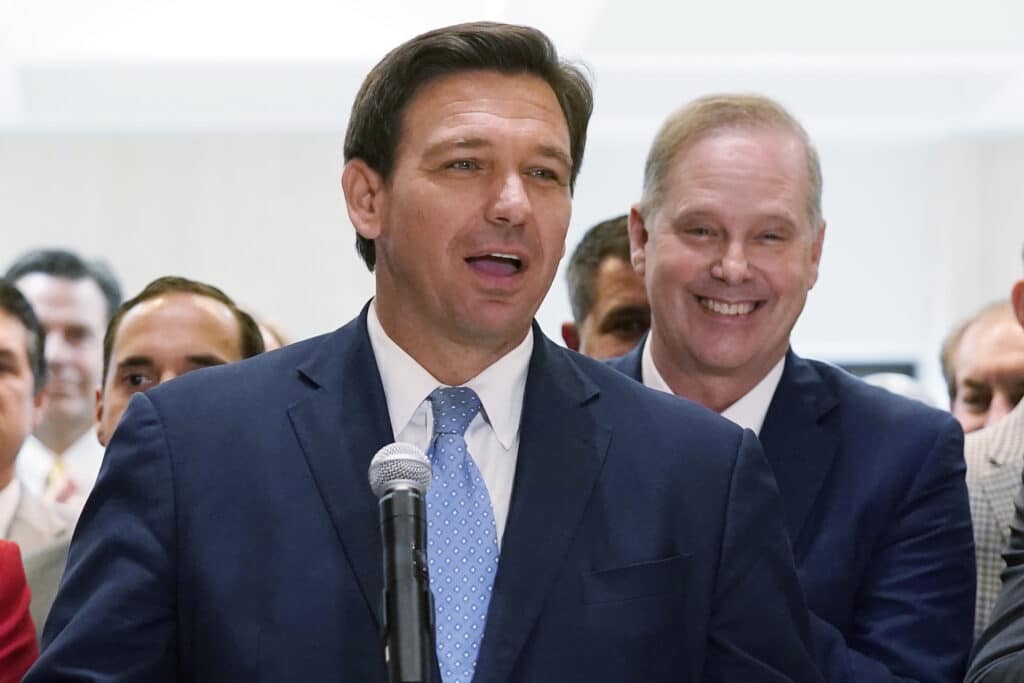 Florida Governor Ron DeSantis signed a bill into law banning transgenders from public female sports teams. The law is expected to be challenged as unconstitutional. The Associated Press has the story:

“In Florida, girls are going to play girls sports and boys are going to play boys sports,” Gov. Ron DeSantis said as he signed the bill into law at a private Christian academy in Jacksonville that would not be subject to the law. “We’re going to make sure that that’s the reality.”

The new law, sure to be challenged as unconstitutional, inflames an already contentious discussion unfolding nationally as Republican-controlled states move to limit the rights of LGBTQ people, whose advocates were especially frustrated that the legislation was signed on the first day of Pride Month.

The NCAA, which oversees college athletics, has said it has “a long-standing policy that provides a more inclusive path for transgender participation in college sports.” The NCAA currently requires transgender women to get treatment to lower their testosterone levels before they can compete in women’s sports.

When the Florida Legislature was considering the measure in April, the NCAA said it would commit championship games to “locations where hosts can commit to providing an environment that is safe, healthy and free of discrimination.”

The measure approved by the GOP-led Legislature takes effect July 1. It says a transgender student athlete can’t participate without first showing a birth certificate saying she was identified as a girl when she was born. It’s not clear whether athletes must show their birth certificates, or only those whose gender is questioned. The proposal allows another student to sue if a school allows a transgender girl or woman to play on a team intended for students identified as female at birth.

The final wording of the “Fairness in Women’s Sports Act” stripped away some of its most contentious elements, including a requirement that transgender athletes in high schools and colleges undergo testosterone or genetic testing and submit to having their genitalia examined.

But the legislation signed by the governor advances an underlying principle asserted by supporters: Biological differences make it unfair for athletes identified as boys at birth to compete on teams for girls and women. The law would not bar female athletes from playing on boys or men’s teams.

Human Rights Campaign President Alphonso David said the new law would not only harm transgender girls. “All Floridians will have to face the consequences of this anti-transgender legislation — including economic harm, expensive taxpayer-funded legal battles, and a tarnished reputation.”

Democrats and LGBTQ advocates said the law is discriminatory and will be challenged in court as unconstitutional.

“This is yet another hate-driven attack from the governor and Republican legislators, and it’s insulting that they’ve staged this morning’s photo-op on the first day of Pride Month,” said state Sen. Shevrin Jones. “At the end of the day, transgender kids are just kids.”

The ban was tucked at the last minute of the legislative session into a measure allowing public universities and colleges to sponsor charter schools — a point the governor did not mention during the bill signing. It was the transgender athletes provision that was front and center in Tuesday’s rhetoric.

“This bill is very simply about making sure that women can safely compete, have opportunities and physically be able to excel in a sport that they trained for, prepared for and work for,” said state Sen. Kelli Stargel, a Republican who championed the bill.

“This is nothing about anybody being discriminated against,” she said. “It’s solely so that women have an opportunity to compete in women’s sports.”

The Florida law mirrors an Idaho law, the first of its kind when enacted last year, that is now mired in legal challenges. GOP governors in Arkansas, Mississippi and Tennessee recently signed similar measures.

Efforts by conservatives to restrict rights of gay, lesbian and transgender people have spawned numerous battles in key arenas — not only in legislatures and courtrooms but also across the economy, and critics warned of looming consequences.

According to a 2017 Associated Press study, North Carolina stood to lose $3.8 billion over a dozen years because of a so-called “bathroom bill.” Those losses were averted when a 2019 settlement kept the state from barring transgender people from using bathrooms that conformed to their gender identity.

A Connecticut track athlete, Selina Soule, joined the Florida governor at the news conference to talk about how she failed to advance in competitions because she competed against transgender athletes. She called it unfair.

That Soule was from out of state was not lost on critics who contend that the matter was not an urgent one for Florida, noting that just 11 athletes applied for screening by the Florida High School Athletic Association since adopting its transgender participation policy in 2013.

“This is not out of need or necessity,” said Orlando Gonzales, the executive director of SAVE, a South Florida gay rights advocacy group, during a news conference. “This is really just to throw red meat out there to really rally the base of people who are anti-LGBT.”