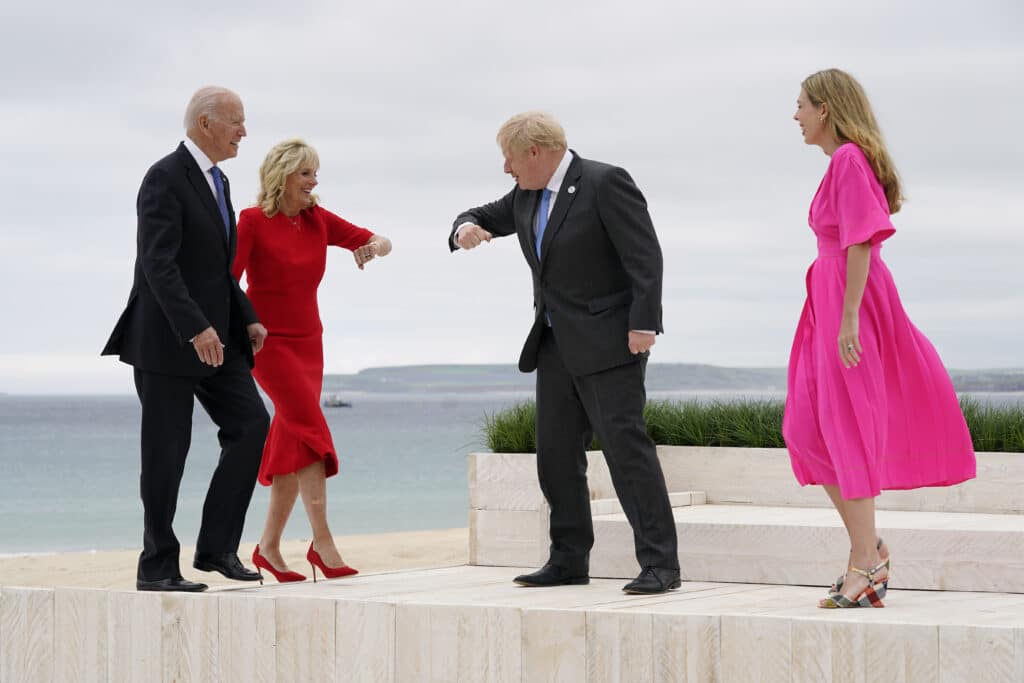 The Group of Seven nations meeting in Britain with the European Union started off lightheartedly, with fist bumps, smiles and laughs. Topics they intend to cover include Russia and China. Hundreds of people showed up to protest. The Associated Press has the story:

(AP) The Latest on the Group of Seven nations meeting being held in England:

CARBIS BAY, England — British Prime Minister Boris Johnson greeted leaders from the Group of Seven nations and the European Union on a wooden boardwalk on the freshly raked sand of Carbis Bay to open the G-7 summit on Friday.

The couple greeted leaders with elbow bumps and small talk about social distancing and the weather, under typically moody English skies.

Johnson, who wed the former Carrie Symonds last month, later joked it was like walking down the aisle.

Reporters asked U.S. President Joe Biden what his message was for Russian leader Vladimir Putin, whom Biden is scheduled to meet with next week. The president replied, “I’ll tell you after I’ve delivered it.”

The G-7 leaders posed for a group photo. As the group walked away, led by Johnson, French President Emmanuel Macron threw his arm around Biden’s shoulder and began an animated discussion.

Macron’s office said the French leader and Biden discussed China, agreeing there should be no confrontation but Western democracies must defend their values and interests. The two men, who were meeting for the first time, talked for several minutes while heading to a meeting room.

PARIS — Leaders of European Union nations who are attending the Group of Seven summit in England gathered before the official start of the event with top EU officials.

“The European position is clear: China is a systemic rival, a partner on global issues and a competitor,” Macron’s office said in a statement.

The European leaders also discussed ways to finance and donate COVID-19 vaccines, with the aim of getting 60% of the people living in the world’s poorest countries vaccinated by March 2022, according to Macron’s office.

FALMOUTH, England — Hundreds of people have gathered for climate change protests near the site of the Group of Seven leaders’ summit in southwest England.

Ahead of the official start of the three-day talks, some activists sent a barge carrying inflatable caricatures of U.S. President Joe Biden and British Prime Minister Boris Johnson floating off the coast of Cornwall on Friday. The figures had messages written on their hands reading “Wave of Hope” and “Crack the Crises.”

Later, around 500 people joined a rally in St. Ives organized by the Extinction Rebellion climate activism group. Protesters wore blue and green gowns and headdresses while holding flags that read “G7 drowning in promises” and “Action not words.”

Climate change is a top issue on the G-7 summit agenda, along with recovery from the coronavirus pandemic.

Dozens of young people also joined a protest on behalf of Fridays for Future, a youth climate movement kicked off in 2018 by activist Greta Thunberg.

“I’m inspired by the youth who are leading Fridays for Future. I think they are amazing, and if we have any hope, the hope is with them and not with our rich, greedy, lying leaders of the world meeting for the G-7,” said Jill Eastland, 56, who joined the protest.

British Prime Minister Boris Johnson said ahead of a leaders’ summit starting Friday that he expected the G-7 to commit to sharing 1 billion doses with countries around the world.

Germany has said it plans to donate 30 million of its vaccine doses by the end of the year, part of a commitment of 100 million by the European Union. Merkel’s government has noted that Germany has been a major donor to the U.N.-backed COVAX facility, which is supplying doses to poorer countries, and that the EU has been a major exporter of vaccines.

Merkel said after arriving at the summit: “I hope that we will achieve very good results to show that we’re not just thinking of ourselves, but we’re also thinking of those who don’t yet have the opportunity to get vaccinated — above all, African countries, but others, too.”

She didn’t elaborate on what those results would be.

CARBIS BAY, England — German Chancellor Angela Merkel says she expects the Group of Seven to send a strong signal for “values-based multilateralism,” but she cautioned that problems such as climate change won’t be solved without China.

Merkel said after arriving at a G-7 leaders’ summit in southwest England on Friday that U.S. President Joe Biden “represents the commitment to multilateralism that we have been missing in recent years.”

The chancellor added: “We put in a strong word here for multilateralism here, and for values-based multilateralism.” She said that puts the G-7 — Canada, France, Germany, Italy, Japan, the United Kingdom and the United States – at odds with Russia and also “in some aspects” with China.

Merkel is attending what’s expected to be her last G-7 summit after nearly 16 years in power.

“We need everyone in the world — we want to work together, particularly in the areas of climate protection and biodiversity. We will never achieve solutions there without China,” she said.

Police said Friday that officers searched a car and a van about seven miles (11 kilometers) from the Carbis Bay Hotel on Thursday afternoon and found the items inside.

Four men and three women were arrested on suspicion of conspiracy to commit public nuisance and possessing an article with intent to commit criminal damage. All seven remain in police custody.

Police said they support safe and legal protests but criminal activity and public disorder are not tolerated.

Security is tight around the G-7 venues near St. Ives, England, where leaders of the world’s wealthy nations are gathering for three days of talks. Armed soldiers guarding the main sites and some 5,000 extra police officers from around the U.K. deployed to the area.

First Lady and Duchess of Cambridge touring a preschool

HAYLE, England — U.S. first lady Jill Biden and Kate, the Duchess of Cambridge, are touring a preschool in southwestern England and learning how the children care for some rabbits.

Biden and the former Kate Middleton are visiting with 4- and 5-year-olds at Connor Downs Academy in Hayle, England. Biden carried a bowl of carrots when they went outside to see the bunnies.

Biden is a longtime English teacher who focuses on education, as does Kate, a mother of three young children.

The first lady is traveling with her husband, President Joe Biden, who is attending a Group of Seven summit of the world’s largest economies opening Friday in Carbis Bay.

CARBIS BAY, England — Workers are carefully raking the sand on the beach where British Prime Minister Boris Johnson will greet Group of Seven leaders at the start of their summit in southwestern England.

The backdrop for the greetings and family photo on Friday is an idyllic view of Carbis Bay, with the event’s huge security operation just out of sight.

A Royal Navy destroyer is moored in the bay, and armed police and snipers are ringing the seaside resort where leaders of seven wealthy nations are meeting for the first time in two years.

Psaki, in a statement, said the meeting will affirm ties between the two nations and the leaders will discuss the COVID-19 pandemic, climate change and international security.

Merkel will be the first European leader to visit the White House.

She and Biden were set to meet later Friday at the Group of Seven summit, a gathering of some of the world’s wealthiest nations, taking place in England.

FALMOUTH, England — The mother of a British teenager killed in a road accident involving a U.S. diplomat’s wife says she is hopeful of progress in the stalled case after Prime Minister Boris Johnson raised the case with President Joe Biden at the G-7.

Harry Dunn, 19, died in 2019 when his motorcycle collided with a car driven by Anne Sacoolas near a military base in England used by the U.S. Sacoolas claimed diplomatic immunity and returned to the United States after the crash. She has been charged in England with causing death by dangerous driving but is refusing to come back to Britain.

The U.K. government said Johnson discussed the issue with Biden when they met Thursday, “and reiterated that the U.K. wants to see justice done for the family.” Johnson said the president was “extremely sympathetic” to the family’s plight.

Biden’s first wife and their 1-year-old daughter died in a car accident in 1972.

“It is almost two years since we lost Harry in August 2019 and it would be lovely to think that all parties can now come together to help bring this living nightmare to an end so that we can try to rebuild our shattered lives,” Charles said.

BERLIN — The German government says a member of the country’s advance team to the G-7 summit has gone into precautionary quarantine after a coronavirus case was reported in their hotel in the Cornish town of St. Ives.

The government said in a statement Friday that the incident would have no impact on German Chancellor Angela Merkel and her delegation’s trip to the summit in Carbis Bay.