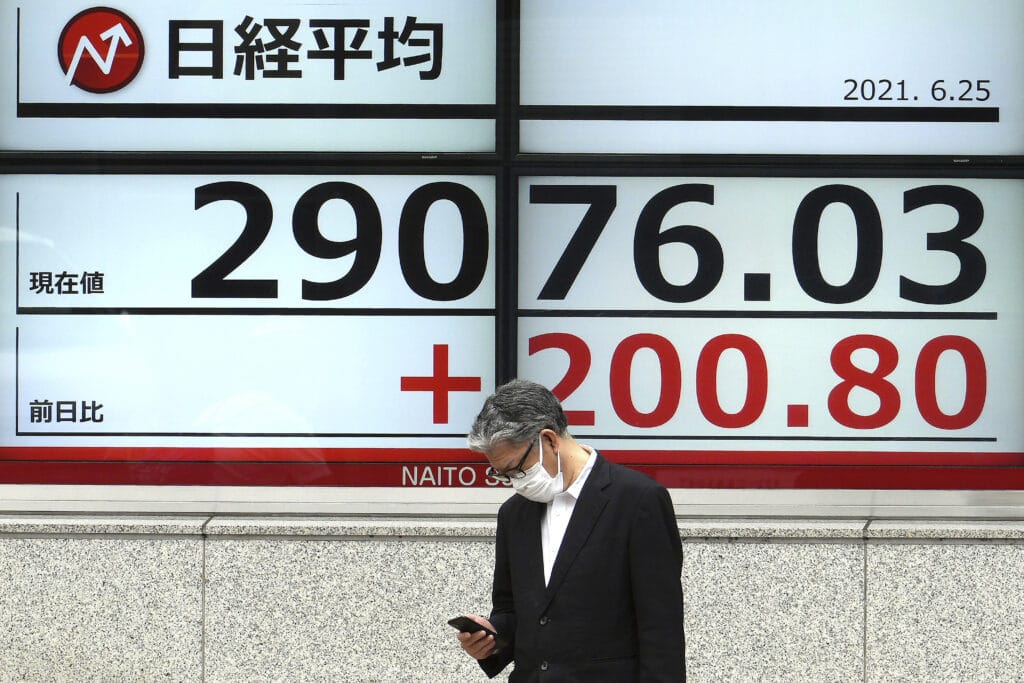 “The breakthrough in infrastructure spending talks overnight has lifted sentiments, with spending plans historically being a positive for the markets,” said Yeap Jun Rong, market strategist at IG in Singapore. “Sectors leaning towards economic recovery and reopening may see strength.”

A recovery in the U.S. economy is a boon for the export-driven Asian region. Although the vaccine rollout in Asia has lagged behind most parts of U.S. and Europe, the region’s economies are likely to benefit from an overseas recovery.

Shares in Japanese electronics company Panasonic Corp. shot up nearly 5% after it confirmed it had sold off all the Tesla Inc. shares it owned, worth about 400 billion yen ($3.6 billion). Panasonic said its partnership with the U.S. electric vehicle company will continue, but it wanted cash for future investments, without disclosing details.

Shares in nuclear and technology giant Toshiba Corp. sank 0.6% after shareholders rejected a proposal to reappoint the chairman and one other board member, while approving the other directors. Activist overseas investors had demanded Chairman Osamu Nagayama step down to take responsibility after an investigation said the shareholders’ meeting last year was improper and company officials had colluded with government bureaucrats. He was not directly implicated in any wrongdoing.

Biden’s infrastructure deal is sure to benefit companies in the construction industry.

The plan, costing $973 billion over five years, is the culmination of months of talks, and a larger spending plan from Biden is still possible later this year.

Markets have calmed since the Federal Reserve surprised investors last week by saying it could start raising short-term interest rates by late 2023, earlier than expected, if recent high inflation persists.

Meanwhile, orders to U.S. factories for big-ticket manufactured goods rose for the 12th time in the last 13 months in May, pulled up by surging demand for civilian aircraft. The Commerce Department said Thursday that orders for durable goods — meant to last at least three years — climbed 2.3% in May, reversing a 0.8% drop in April and coming despite a backlogged supply chain and a shortage of workers.