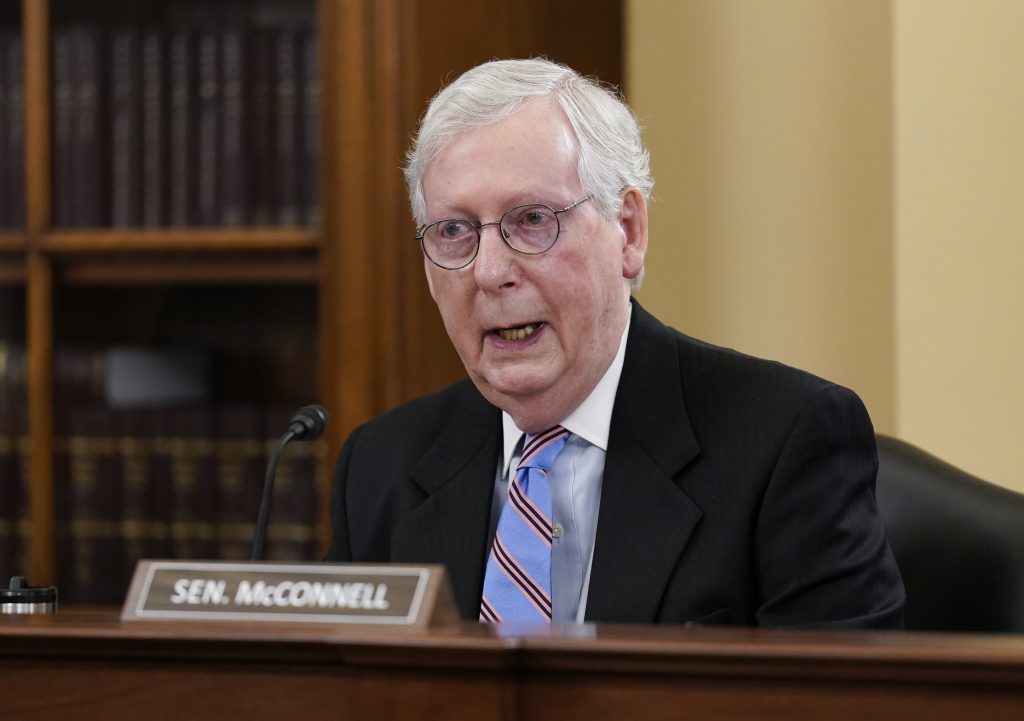 WASHINGTON (AP) — Republicans in the U.S. Senate mounted an aggressive case Tuesday against sweeping election and voting-access legislation from Democrats, pushing to roll back proposals for automatic voter registration, 24-hour ballot drop boxes and other changes in an increasingly charged national debate.

The legislation, a top priority of Democrats in the aftermath of the divisive 2020 election, would bring about the largest overhaul of U.S. voting in a generation, touching nearly every aspect of the electoral process. It would remove hurdles to voting erected in the name of election security and curtail the influence of big money in politics.

Though it is federal legislation, Republicans are fighting a national campaign against it rooted in state battles to restrict new ways of voting that have unfolded during the pandemic. Just Tuesday, the Arizona Legislature sent the governor a bill that would make it easier to purge infrequent voters from a list of those who automatically get mail-in ballots, the latest battleground state to push through changes likely to take months or years to finally settle in court.

GOP Senate leader Mitch McConnell of Kentucky is so determined to stop the legislation that he made a rare appearance at Tuesday’s Rules Committee session in Washington. McConnell and other Republicans on the panel argued for a wave of amendments against key sections of the bill, which Democrats turned aside in an hours-long voting session.

“We’ll hear a lot of flowery language today,” McConnell said. But he declared, “Our democracy is not in crisis” and he wasn’t about to cede control of elections to new laws “under the false pretense of saving it.”

With Democrats holding the White House and narrow control of Congress, they see the legislation as crucial — perhaps their best chance to counter efforts by state-level Republicans who have seized on former President Donald Trump’s false claims about the 2020 election to push ballot restrictions.

Yet even as they tout the measure, Democrats find themselves playing defense, unable to push their legislative response to President Joe Biden’s desk. While the elections overhaul has passed the House, there’s no clear path forward in the Senate, which is split 50-50. Sens. Joe Manchin of West Virginia and Kyrsten Sinema of Arizona have both said they oppose making changes to the Senate’s filibuster rules, which would be needed to maneuver the bill past unified Republican opposition.

Trump’s election claims, which have only increased in the six months since his defeat, were rejected by Republican as well as Democratic election officials in state after state, by U.S. cybersecurity officials and by courts up to the U.S. Supreme Court. And his attorney general said there was no evidence of fraud that could change the election outcome.

“President Trump told a big lie, one of the biggest ever told. We all know that. Every single person in this room knows that,” Sen. Chuck Schumer, the Democratic majority leader, said at the hearing. “And it’s taking root, this big lie is taking root in our country, not just in the minds of his voters but in the laws of the land.”

The laws emerging around the country “are about one thing and one thing alone: making it harder for Americans to vote,” he said.

The Democrats’ measure would not stop every bill being passed in Republican states across the country. But it would make it difficult, if not impossible, for states to press ahead with many of the new rules.

That’s because the legislation would create nationwide rules for early voting and no-excuse absentee voting, standardizing the process. Currently, six states don’t offer early, in-person voting and a third of states still require an excuse — such as illness or planning to be away from home on Election Day — to vote by mail, according to the National Conference of State Legislatures.

Republicans walked a narrow line during much of the discussion on Tuesday, criticizing congressional Democrats for seeking to change voting rules while at the same time offering robust support for GOP state lawmakers who are doing the same.

The GOP senators cited high voter turnout in last year’s presidential election during the pandemic as proof that the system worked without the Democrats’ changes and voters were not disenfranchised. But they offered little justification for GOP efforts at the state level to impose new limits on voting, particularly mail voting.

At one point, McConnell noted 19 fraud-related convictions in his state since 2010, out of millions cast over that period. In 2020, roughly 2.1 million ballots were cast for president in Kentucky.

Republicans also attacked provisions that would create a new public financing system for political campaigns and strengthen the enforcement capabilities of the federal agency tasked with policing elections, as well as dozens of other proposals that would dictate how states conduct their elections.

While Republicans argue the new state rules are needed to secure the vote, critics warn the states are seeking to reduce voter access, particularly for Black voters, who are a crucial part of the Democratic Party base. That could usher in a new Jim Crow era for the 21st century, they warn.

“These bills moving in state capitals across America are not empty threats, they are real efforts to stop people from voting,” said Sen. Amy Klobuchar, a Minnesota Democrat and chairwoman of the Senate Rules Committee.

Yet moderate members of the Democratic caucus — not just Republicans — pose a sizable obstacle to the bill becoming law.

Manchin has called for any elections overhaul to be done on a bipartisan basis, despite Republican insistence that no changes are necessary. Other Democrats want to pare back the bill to core voting protections to try to put Republicans on the spot.

Democrats have been making their own changes to draw more support.

In the latest version of the legislation, states would have more time and flexibility to put new federal rules in place. Some election officials had complained of unrealistic timelines, increased costs and onerous requirements.

States would have more time to launch same-day voter registration at polling places and to comply with new voting system requirements. They would also be able to apply for an extension if they were unable to meet the deadline for automatic voter registration. Officials have said these are complex processes that require equipment changes or upgrades that will take time.

Democrats are also dropping a requirement that local election offices provide self-sealing envelopes with mail ballots and cover the costs of return postage. They plan to require the U.S. Postal Service to carry mail ballots and ballot request forms free of charge, with the federal government picking up the tab.

But Republicans argue the changes would do little to limit what they view as unwarranted federal intrusions into local elections.

“Giving states more time to implement bad policy doesn’t make the policy less bad,” said Sen Roy Blunt of Missouri, the ranking minority member on the committee. “I think the federal government taking over elections is the wrong thing to do.”

By BRIAN SLODYSKO and CHRISTINA A. CASSIDY