Hispanic man suing over cops putting him in chokehold 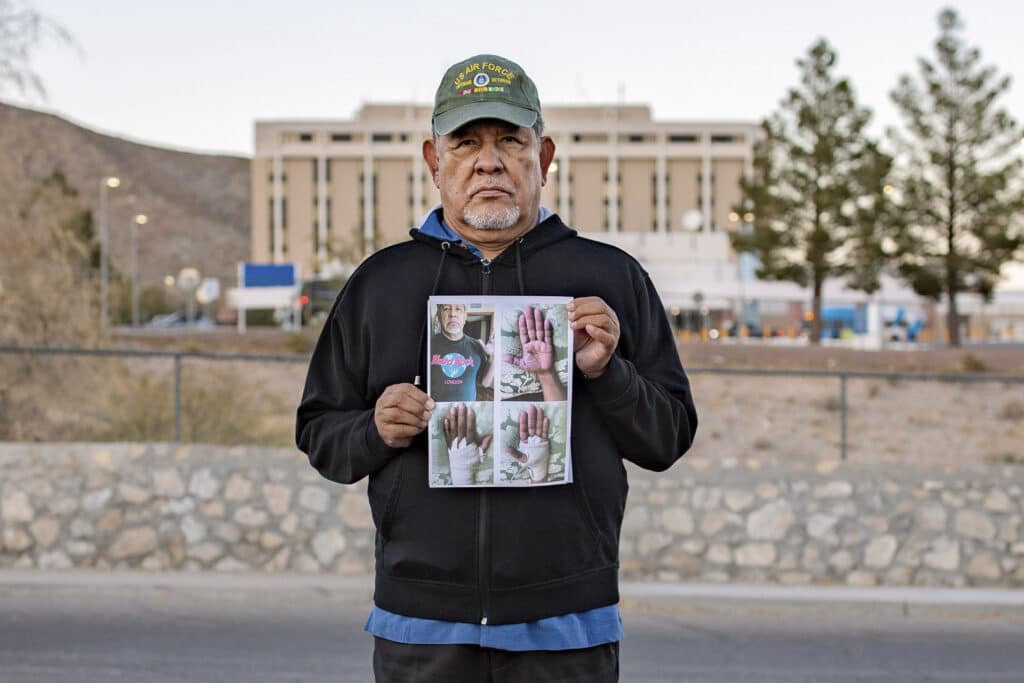 WASHINGTON (AP) — Something went wrong at the security checkpoint at the VA hospital in El Paso, Texas, on a winter’s day in 2016.

A 70-year-old man arriving for dental work was put in a chokehold and thrown to the ground by federal police officers in an altercation that was caught on camera.

The man, Jose Oliva, left needing surgery on his shoulder and also required treatment for his throat, eardrum and hand, on which he wore a gold watch he received when he retired after 25 years in federal law enforcement.

But when Oliva, who identifies himself as Mexican American, tried to sue the three officers who were involved, a federal appeals court ruled he was out of luck. He’s asking the Supreme Court to revive his lawsuit and the justices could say what they’re going to do as early as Monday.

The case puts before the justices the issue of suing law enforcement officers who used chokeholds and possibly excessive force at a time of national reckoning over police tactics and treatment of people of color.

“I just think when I’m alone, letting my mind wander, how could this have happened to me, who served a year in the combat zone and then the rest of my life in law enforcement? How could this happen to me?” Oliva said in a telephone interview with The Associated Press.

Now 76, Oliva said he still has trouble swallowing and his shoulder still hurts five years after the incident.

There is no sound to accompany the images from the day, but Oliva appears to be waiting in line to go through security and at no time physically resists the officers.

He said the trouble began when an officer asked him for his identification, which he indicated he already had put in a bin that was about to be scanned.

The officers and Oliva dispute precisely what was said. But at one point, Officer Mario Nivar approached Oliva with handcuffs at the ready. As soon as Oliva reached the metal detector, Navir grabbed him, applied a chokehold and wrestled Oliva to the ground. Oliva said he heard a popping sound as his shoulder was wrenched behind his back.

Oliva was charged with disorderly conduct, but the government later dropped the charge.

Nivar was assisted by two other officers, Mario Garcia and Hector Barahona. James Jopling, Nivar’s lawyer, declined to make his client available for an interview or to respond to questions himself.

But lawyers for the other men described Oliva as obstinate in refusing to comply with repeated requests for identification and said the officers acted appropriately.

“Because at that point, he’s a potential threat. You don’t know what he is or what he’s carrying. His obstinate refusal is a concern to everyone. A 70-year-old man can handle a .45 pistol just as well as an 18 year old,” said Louis Lopez, Barahona’s lawyer.

Gabriel Perez, representing Garcia, said the video lacks context, in part because there is no sound.

“He’s a veteran obviously, but he’s entering a public place, a federal installation. Signs state you have to present ID before you are admitted. He’s requested to provide identification. He refused,” Perez said.

U.S. District Judge Frank Montalvo ruled that the lawsuit could go forward, noting that officers do not contend that Oliva resisted arrest.

“This is critical as an officer who grapples and chokes a suspect who is not actively resisting violated clearly established law,” Montalvo wrote.

Fifty years ago, the Supreme Court ruled that, in limited circumstances, people could sue federal officers for violations of their constitutional rights. Seven federal courts of appeals have held that officers can be sued for rights violations in the course of standard law enforcement operations.

But the 5th U.S. Circuit Court of Appeals, which includes Texas, reversed Montalvo’s ruling. A three-judge panel held that the right to sue basically is limited to the same situation the Supreme Court ruled on in 1971, when federal agents entered a home without a warrant, then manacled and strip-searched a suspect.

Appeals court judge Don Willett was not on the three-judge panel that decided Oliva’s case, but in a concurring opinion in another 5th Circuit case that dismissed a lawsuit on similar grounds, Willett called the attack on Oliva “unprovoked” and worried that Oliva and others like him find themselves without any legal recourse.

″Are all courthouse doors—both state and federal—slammed shut?” he asked. Willett said he was compelled by previous 5th Circuit rulings to agree the other lawsuit should be dismissed.

In urging the Supreme Court to take the case, Oliva’s lawyers with the libertarian Institute for Justice quoted Willett that under the law in the 5th Circuit, which also encompasses Louisiana and Mississippi, federal officials “operate in something resembling a Constitution-free zone.”

Oliva, who retired from the U.S. Customs and Border Protection in 2010, said he has a high regard for police officers because he was one of them.

But he said his experience at the VA hospital five years ago “brings to mind more and more the recent attacks on people who have been killed, George Floyd, Eric Garner and the others. The job does not entail assaulting people.”