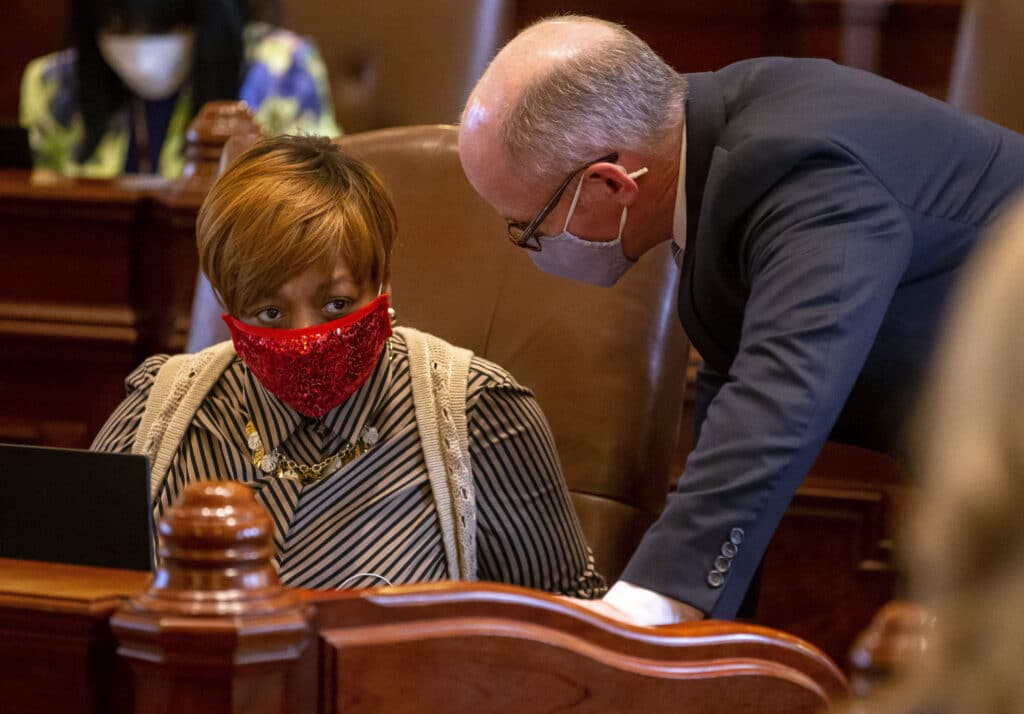 CHICAGO (AP) — Illinois Democrats used inadequate data and an opaque process to draw new legislative districts, a Latino civil rights organization argued in the latest lawsuit seeking to block the maps from being used for statehouse elections over the next decade.

The Mexican American Legal Defense and Educational Fund sued top Democrats and state election officials late Thursday on behalf of five Latino registered voters from Illinois, saying the new maps are “malapportioned,” or not drawn to ensure equal representation of all populations. That could result in Latinos and other minority groups not being equitably represented in the Illinois General Assembly, according to the lawsuit filed in U.S. District Court in Chicago.

Top Illinois Republicans also challenged the maps this week in a lawsuit filed in federal court in Chicago after Gov. J.B. Pritzker signed the new boundaries into law despite a campaign pledge not to approve politician-drawn districts. The Democratic-controlled Legislature late last month approved the maps — drawn to favor Democrats — with all Republicans voting no.

Pritzker and other Democrats who control Illinois state government dismissed the GOP lawsuit as partisan politics and said the maps are fair because they “ensure representation for diverse communities.” But the challenge from MALDEF expands the source of objections to the very groups whose voting rights Democrats say they are protecting.

“The answer is we don’t know,” said Thomas Saenz, MALDEF president and general counsel. “We don’t know because of a lack of data and because of using wrong data.”

The group is suing Pritzker, House Speaker Emanuel “Chris” Welch, Senate President Don Harmon and members of the Illinois State Board of Elections. The lawmakers did not immediately respond to a request for comment Friday, though they have stood by the data used to draw the maps.

The lawsuit asks the court to order lawmakers to throw out the maps and to draw new maps using 2020 census data.

By law, political maps must be redrawn after each decennial census to reflect changes in population and ensure the protection of voters’ rights. The districts must be compact, contiguous and of equal population, among other things.

Historically, districts have been drawn using data from the latest census, which counts an area’s population down to a block level. That provides detailed data on where district boundaries may be drawn to ensure maps comply with the “one-person, one-vote” standard mandated by the Constitution, the lawsuit states. But the pandemic delayed the count this year, and the U.S. Census Bureau has said it won’t have data available to help with redistricting until August.

In Illinois, if the governor doesn’t sign legislation establishing new maps by June 30 the job shifts to a bipartisan commission. So Democrats, citing June 30 as their deadline, used the American Community Survey to draw the boundaries — something MALDEF and more than 50 other human and civil rights organizations have opposed.

Unlike the census, which seeks to count each person, the ACS is an annual sample of a fraction of households used to estimate household characteristics, such as education level and household income. The estimates used by the General Assembly come from data gathered over a five-year period, making it less current than the census, MALDEF argues.

Saenz said he’s concerned about getting an accurate count because if Latino residents are overrepresented in a district it’s a missed opportunity and obligation to create another Latino district. There is no way to know for sure if Illinois Democrats accurately drew the lines — or for residents to weigh in on them — because the full data for each district hasn’t been released, he said.

Pritzker said during his 2018 campaign for governor that an independent commission should draw political boundaries and that he would veto politician-drawn maps. But he noted in recent weeks that no commission had materialized and instead promised to veto any map that was “unfair.”

Upon signing the new maps, Pritzker said they align with both the federal and state Voting Rights Acts, and that they “ensure that communities that have been left out and left behind have fair representation in our government.”

Most states are waiting for the census data to draw new maps. In Oregon, where Democrats also control both chambers of the Legislature, lawmakers faced a July 1 deadline for new maps but the state Supreme Court granted a bipartisan request to extend the deadline.

The Illinois Legislature did not approve new boundaries for congressional districts, with Democratic leaders saying they will wait for census data to draw those maps. Under Illinois law, Democrats do not lose control over federal map drawing after June 30. Read more U.S. news