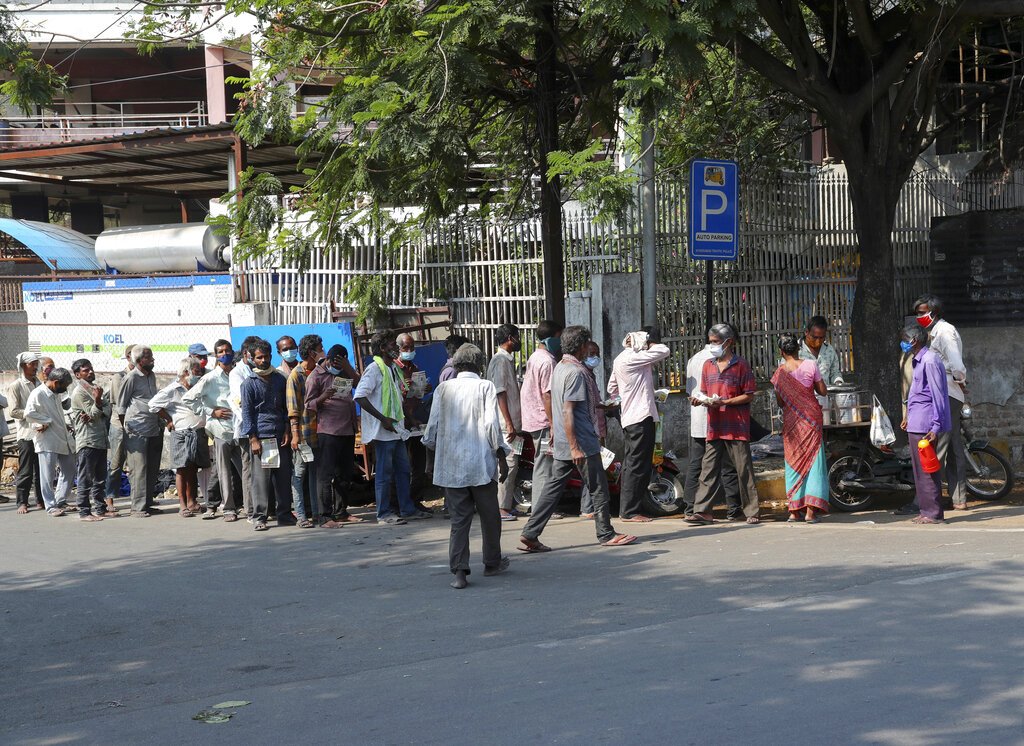 The Indian Supreme Court ordered the nation to increase the supply of medical oxygen to hospitals in the capital. This should help with a 2-week-old shortage that made international headlines. The Associated Press has the story:

NEW DELHI (AP) — Under order by the Supreme Court, India’s government on Thursday agreed to provide more medical oxygen to hospitals in the capital city of New Delhi, potentially easing a 2-week-old shortage that worsened the country’s exploding coronavirus crisis.

Government officials also denied reports that they have been slow in distributing life-saving medical supplies donated from abroad.

The government raised the oxygen supply to 730 tons from 490 tons per day in New Delhi as ordered by the Supreme Court. The court intervened after 12 COVID-19 patients, including a doctor, died last week at New Delhi’s Batra Hospital when it ran out of medical oxygen for 80 minutes.

On Wednesday night, 11 other COVID-19 patients died when pressure in an oxygen supply line stopped working at a government medical college hospital in Chengalpet in southern India, possibly because of a faulty valve, The Times of India newspaper reported.

Hospital authorities said they repaired the oxygen line last week, but that the consumption of oxygen doubled since then, the newspaper said.

The number of new confirmed cases in India on Thursday surpassed 400,000 for the second time since the devastating surge began last month.

The 412,262 new cases pushed the country’s official tally of confirmed cases to more than 21 million. The Health Ministry also reported 3,980 deaths over the past 24 hours, boosting the country’s total to 230,168. Experts believe both figures are an undercount.

K. Vijay Raghvan, a principal scientific adviser to the government, characterized the explosion of cases “a very critical time for the country.”

“As soon as the cases start coming down, you can vaccinate more people and get ahead of the trajectory of the outbreak of the pandemic,” Fauci said in an interview with the Indian television CNN News18 news channel on Thursday. He did not provide specifics of what a shutdown should entail.

He suggested that India should mobilize its military to erect field hospitals that could ease the pressure on hospitals packed with patients.

Fauci also said it appears there are at least two types of virus variants circulating in India. He said B117, which is the U.K. variant, tends to be concentrated in New Delhi and that the 617 variant is concentrated in the worst-hit western Maharashtra state.

“Both of those have increasing capability of transmitting better and more efficiently than the original Wuhan strain a year ago,” Fauci said.

Demand for hospital oxygen has increased sevenfold since last month, a government official said, as India struggles to set up large oxygen plants and transport oxygen to where it is needed. Ships carrying oxygen are bound for India from Bahrain and Kuwait in the Persian Gulf, officials said.

Most hospitals in India don’t have their own plants to generate oxygen for patients, As a result, hospitals typically rely on liquid oxygen, which can be stored in cylinders and transported in tanker trucks. But amid the virus surge, supplies in hard-hit places like New Delhi have run critically short.

Dr. Himaal Dev, chief of the critical care unit at Apollo Hospital in the southern city of Bengaluru, said COVID-19 patients in intensive care wards need to receive at least 10-15 liters of oxygen per minute because of reduced lung function.

Enough oxygen but difficulty getting it to where it’s needed

Health Minister Harsh Vardhan said India has enough oxygen but faces capacity constraints moving it to where it is needed. Most oxygen is produced in the eastern parts of India, while the demand has risen in northern and western parts.

The outbreak has also spread to neighboring countries which share porous borders with India.

In Nepal, thousands of people rushed to leave the country ahead of a halt to all international flights because of spiking COVID-19 cases.

Nepali citizens leaving to go back to their jobs in foreign countries or to visit family members and a few foreign tourists lined up at Kathmandu’s airport before flights stopped at midnight Thursday. Domestic flights in Nepal were halted on Monday.

Nepal’s main cities and towns have been in lockdown since last month as the number of coronavirus cases and deaths continue surging. Nepal recorded its highest number of daily infections, 8,659, on Wednesday and 58 deaths, which was also a record.

In India, Prime Minister Narendra Modi reviewed the coronavirus situation with top officials on Thursday and told them to ramp up the country’s vaccination drive.

The country, with nearly 1.4 billion people, has so far administered 162 million doses but is faces vaccine shortages.

The United States, Britain, Germany and several other nations are rushing medicine, rapid virus tests and oxygen and material the country needs to boost domestic production of vaccines to ease pressure on the country’s fragile health infrastructure.

India’s vaccine production is expected to get a boost with the United States supporting a waiver of intellectual property protections for COVID-19 vaccines.

Vaccine components from the U.S. that have arrived in India will allow the manufacturing of 20 million doses of the AstraZeneca vaccine, said Daniel B. Smith, the senior diplomat at the U.S. Embassy in New Delhi.

Last month, Adar Poonawalla, CEO of the Serum Institute of India, the world’s biggest vaccine maker, appealed to President Joe Biden to lift the embargo on U.S. export of raw materials, which he said was affecting his company’s production of COVID-19 shots.

The government meanwhile described as “totally misleading” Indian media reports that it took seven days to develop a procedure for distributing urgent medical supplies that started arriving from other countries on April 25.

The government said in a statement that a mechanism for allocating supplies received by India has been put in place for effective distribution. The Indian Red Cross Society is involved in distributing the supplies from abroad, the statement said.