Blinken to Zelensky: We’re with Ukraine 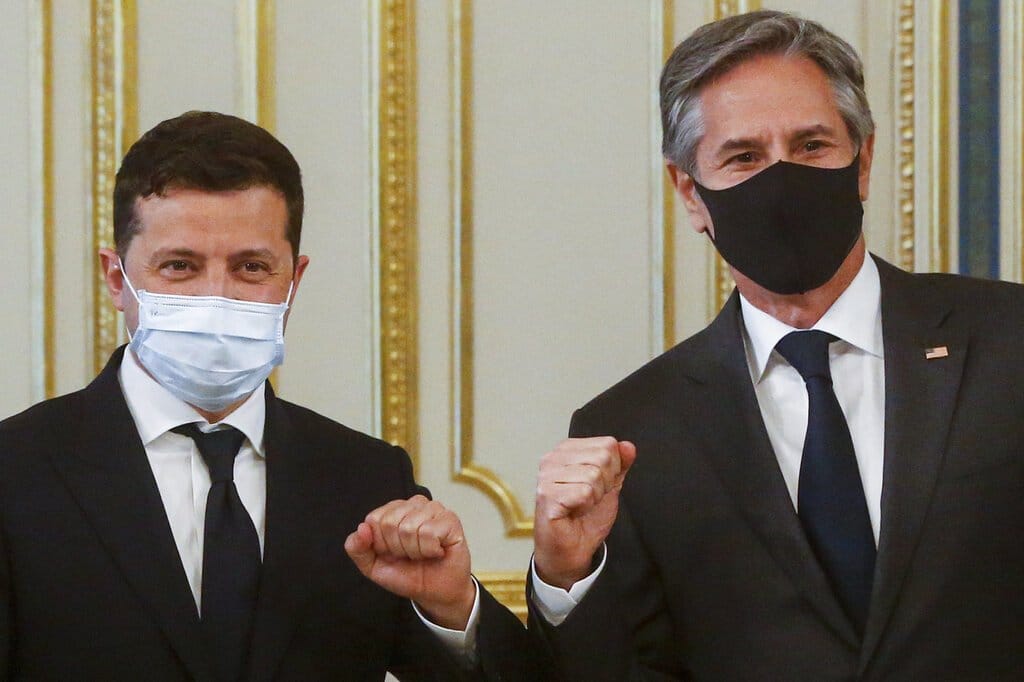 At a meeting with Ukrainian President Volodymyr Zelenskyy, U.S. Secretary of State Antony Blinken reiterated U.S. support for Ukraine despite heightened tensions with Russia. President Joe Biden has made Ukraine a high priority. The Associated Press has the story:

KYIV, Ukraine (AP) — U.S. Secretary of State Antony Blinken reaffirmed Washington’s support for Ukraine at a meeting Thursday with President Volodymyr Zelenskyy in the wake of Kyiv’s heightened tensions with Russia, fueled by Moscow’s recent troop buildup near their border.

The top American diplomat met with Zelenskyy during his one-day visit and reiterated the U.S. commitment to Ukraine’s “sovereignty, territorial integrity and independence,” while also underscoring the importance of Ukrainian efforts to tackle widespread corruption and carry out reforms.

“Ukraine is facing two challenges: aggression from outside, coming from Russia, and in effect aggression from within, coming from corruption, oligarchs and others who are putting their interests ahead of those of the Ukrainian people,” Blinken told a news conference after meeting with Zelenskyy.

By visiting so early in his tenure, before any trip to Russia, Blinken signaled that Ukraine is a high priority for President Joe Biden’s foreign policy. His visit was highly anticipated in Ukraine, with hopes for increased military aid and strong support for NATO membership being voiced on the front lines of the battle against Russia-backed separatists in the east and in the halls of government in Kyiv.

Ukraine has seen an increase in hostilities in the east in recent months. Ukraine’s military says 35 of its soldiers have been killed by rebel attacks this year, a significant rise from the latter part of 2020. Russia, which claims it has no soldiers in eastern Ukraine, fueled the tensions this year by massing troops and conducting large-scale military exercises near the border.

Zelenskyy has made it clear that he wants significant action — “a clear signal about the European and Euro-Atlantic prospect,” as he said Monday on Twitter, referring to Ukraine’s aspirations to join NATO and the European Union. “Postponing these issues for ‘later,’ ‘some day,’ ‘(in) 10 years’ has to end.”

Blinken said Ukraine’s “Euro-Atlantic aspirations” were discussed with Zelenskyy and that the U.S. was “actively looking” at strengthening its security assistance to Ukraine, but didn’t give details.

Zelenskyy also said the military support and the financial support from the U.S. “is increasing,” but didn’t elaborate.

Both noted that while Russia has pulled back some of its forces from the border, a significant number of troops and equipment is still there. Blinken said Washington was watching the situation “very, very closely,” as “Russia has the capacity, on fairly short notice, to take aggressive action if it so chooses.”

“I can tell you, Mr. President, that we stand strongly with you,” Blinken said.

In Brussels on Thursday, NATO Secretary General Jens Stoltenberg also said the 30-nation military alliance “needs to stay vigilant and closely monitor the developments” in and around Ukraine. “We have seen some reduction in the number of Russian troops, but tens of thousands remain, and we also see that Russia has kept a lot of weapons, prepositioned equipment, and they’re also imposing restrictions in the Black Sea,” Stoltenberg told reporters.

Efforts have stalled to end the conflict in eastern Ukraine, which has killed more than 14,000 people since it broke out in 2014. Zelenskyy has called for the U.S. to try to push these efforts forward by joining the negotiations of the “Normandy Format” that consists of Russia, Ukraine, Germany and France. Russia is almost certain to oppose any U.S. involvement in the negotiations.

Earlier this week, Foreign Minister Dmytro Kuleba said Ukraine also was worried about Russia’s announcement last month that it was redeploying warships from its Caspian flotilla to the Sea of Azov, an extension of the Black Sea that borders Ukraine and Russia. “There is now a big threat in the Sea of Azov; it is unprecedentedly large,” Kuleba said.

Zelenskyy said he discussed security in the Black Sea and the Sea of Azov with Blinken, but wouldn’t reveal any details.

He also said he invited Biden to visit Ukraine this year, and Blinken said the U.S. president would “welcome the opportunity at the right time.”

Earlier in the day, Blinken met with Kuleba, and they both joined Metropolitan Epiphaniy — head of the Ukrainian Orthodox Church, which split from Russia’s Orthodox Church. They laid flowers at a memorial to Ukrainian soldiers killed in the conflict in the east and toured St. Michael’s Monastery.

Blinken also met with Prime Minister Denys Shmyhal, who tweeted that his visit to Kyiv was “a manifestation of firm support and a high level of relations of two states,” and with Ukrainian lawmakers.

Blinken’s visit to Kyiv comes at a time of heightened tensions between Washington and Moscow over Ukraine, imprisonment of Russian opposition leader Alexei Navalny, and accusations of hacking and election interference.

Last month, Biden suggested to Russian President Vladimir Putin to meet for talks in a third country in an effort to defuse tensions. The Kremlin has been considering the proposal.

Asked by the Russian state news agency Tass on Thursday whether there was a list of possible places for the meeting, Putin’s spokesman Dmitry Peskov said he had “still nothing to tell about the possible meeting.”

Kyiv-based political analyst Vadym Karasev said Washington was trying to avoid “sharp and loud statements in order not to thwart the (possible) meeting of Putin and Biden, during which the issue of de-escalation near Ukrainian borders should be resolved for good.”

“That’s why Blinken used the whole arsenal of a sophisticated diplomat in order to becalm Kyiv on one hand by promising to increase military and financial support, and on other had not to force the question of Ukraine’s NATO membership,” Karasev said.

“Both Washington and Kyiv need one thing today — to avoid a hot war with Russia and to make Russian troops pull back from the Ukrainian border,” Karasev said. “If diplomatic methods are exhausted, only then one should expect vivid metaphors and loud accusations from loudspeakers.”