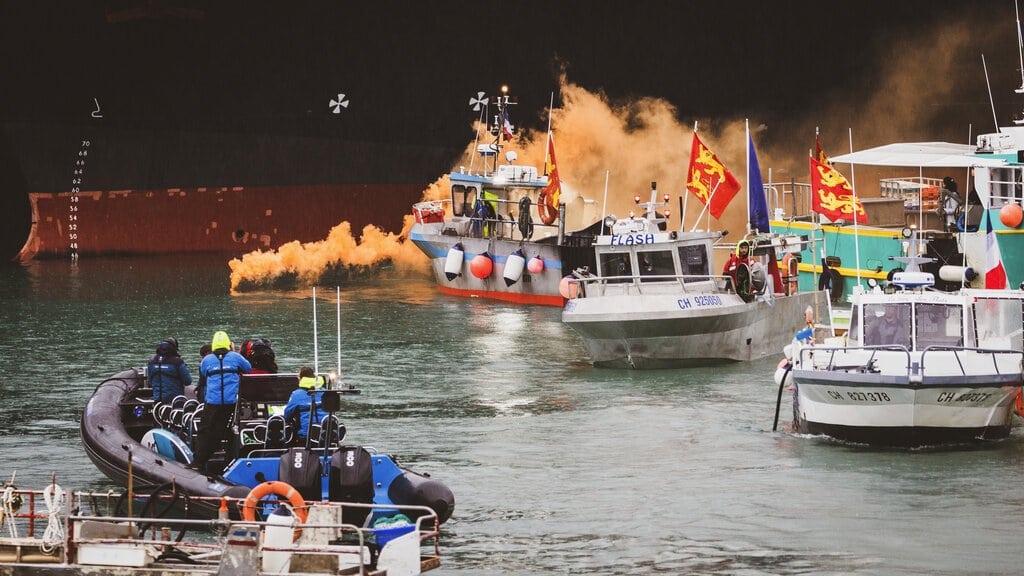 France and Britain have both deployed patrol ships to monitor the waters around the English Channel island of Jersey, in response to French fishing boats angry about Britain cutting off access to waters in the area post-Brexit. Jersey fisherman John Dearing said the scene off St. Helier was “like an invasion.” The Associated Press has the story:

The irate mariners set off flares and entered the island’s main harbor in the first major dispute between France and Britain over fishing rights in the wake of the U.K.’s Brexit divorce from the European Union.

EU officials appealed for calm, but also accused the U.K. of not respecting the terms of the post-Brexit trade deal.

The French naval policing boats Athos, which has a large machine gun on its front deck, and the unarmed Themis were sent to keep watch on waters between France and Jersey, French maritime authorities said. The deployment came after Britain on Wednesday directed two naval vessels, the HMS Severn and the HMS Tamar, to also patrol the waters around the island, a self-governing British Crown Dependency near the coast of northern France.

French fishermen steamed into Jersey waters to protest new post-Brexit rules requiring them to submit their past fishing activities in order to receive a license to continue operating in the island’s waters. French fishing communities claim some boats that have operated around Jersey for years have suddenly had their access restricted.

Dimitri Rogoff, who heads a group of fishermen, said about 50 boats from French ports along the western Normandy coast joined the protest Thursday morning, gathering off the Jersey port of St. Helier. He said the protest over licenses was not an attempt to blockade the port.

“This isn’t an act of war,” Rogoff said in a phone interview. “It’s an act of protest.”

Yet Jersey fisherman John Dearing said the scene off St. Helier was “like an invasion.”

“It was quite a sight,” he told British news agency PA. “I looked from the shore this morning and it was just like a sea of red lights and flares already going off at sea.”

French authorities said the patrol vessels were there to assist in any maritime emergencies. “We would thus be capable of intervening rapidly should the situation worsen, which is not the case at the moment,” they said in a statement to The Associated Press.

The British government said that, “given the situation is resolved for now,” the Royal Navy vessels would return to port in the U.K.

Opponents accused British Prime Minister Boris Johnson of escalating the crisis and of using the fishing spat as an Election Day stunt. The story dominated U.K. front pages on Thursday as voters went to the polls in local and regional elections in England, Scotland and Wales.

French and British fishermen have often clashed. The latest dispute, the first since Britain’s departure from the European Union last year, came after Jersey implemented new requirements that make fishermen account for their past work in Jersey waters to be eligible for a license to continue operating.

“It clearly is an attempt at pitting fishermen against each other – I’m entitled to this, you don’t have rights to that,” said Hugo Lehuby, a representative for French fishermen in Normandy. “It really is a provocation from Jersey.”

Authorities on Jersey, the largest of the Channel Islands, said some French boats had not provided the right paperwork and accused France of acting disproportionately after Paris threatened to cut off electricity to the island.

Jersey and the other Channel Islands lie closer to France than to Britain and Jersey receives most of its electricity from France, supplied through undersea cables.

Jersey government officials met with French fishermen on Thursday in an attempt to end the dispute, calling the talks “constructive.”

Don Thompson, president of the Jersey Fishermen’s Association, said the French fishermen should be given more time to supply the information to get the permits but that no more concessions should be made.

“The real way to solve this is not by rolling over and giving (the) French what they want,” he told the AP. “They want the conditions completely removed from the licenses.”

He said if French fishermen had missing paperwork, “then they just need to go back to their government, not hold Jersey under siege.”