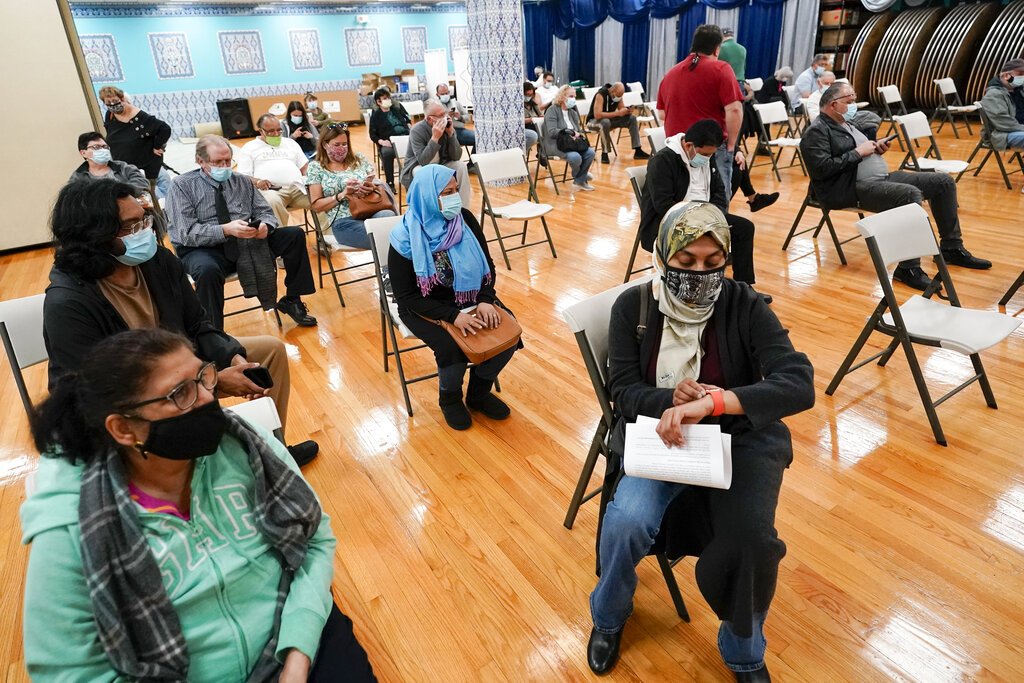 (AP) Islamic leaders are getting the word out that obtaining a vaccine during the holy month of Ramadan does not violate religious practices. Inoculation is not the same thing as ingesting something while fasting. The Associated Press has the story:

PORTLAND, Maine (AP) — Islamic leaders are using social media, virtual town halls and face-to-face discussions to spread the word that it’s acceptable to be vaccinated for the coronavirus during daily fasting that happens during Ramadan, the most sacred month of the year for Muslims.

During the holy month which begins next week, Muslims across the world abstain from all food and drink from sunrise to sunset before typically congregating for evening prayers and iftar meals. The vaccine discussion centers on whether an inoculation amounts to the prohibited act of ingesting something while fasting.

It doesn’t, said Mohamud Mohamed, imam of the Maine Muslim Community Center, who is working to assure Muslims at his Portland mosque that getting the vaccine is perfectly fine but finds that some people are clinging to misperceptions.

“There is a lot of bad information going around,” said Mohamed, who devoted his address during recent Friday prayers to promoting the vaccine. A vaccine clinic is being held at the mosque on Saturday.

He and others seeking to reassure the faithful have the theological backing of top Islamic authorities. Saudi Arabia’s highest cleric, Grand Mufti Sheikh Abdulaziz Al Sheikh, and Sunni Islam’s top religious leader in Lebanon, Grand Mufti Sheikh Abdul-Latif Derian, have both said that getting the coronavirus vaccine does not constitute breaking one’s fast.

Still, Safiya Khalid, a city council member in Lewiston, about 30 miles north of Portland, sparked a lively conversation among fellow Muslims when she raised the issue on social media. Others questioned whether the vaccine violated fasting — until an imam weighed in.

“We need more communication,” said Khalid, who has already had her first vaccine dose and will get her second shot during Ramadan. “You can do this and protect your community and your family.”

On New York’s Staten Island, imam and NYPD chaplain Tahir Kukaj, whose mosque was administering 1,000 vaccines on Thursday and Friday, said he has heard all sorts of misconceptions about vaccines, and some “people tend to believe nonsense rather than facts.”

Protecting others is a core teaching of Islam

But protecting others is a core teaching of Islam, and Kukaj said Muslims are taught to do whatever they can to save lives. Getting vaccinated is a way to do that: “Of course, we have to save our own life first.”

Out west, the Utah Muslim Civic League has partnered with the Salt Lake County Health Department to put on two vaccination clinics including a drive-through one at a mosque that was held before Ramadan. The group also organized a virtual town hall Thursday night featuring imams and health professionals to discuss issues surrounding vaccination and fasting.

The goal is raising awareness and “myth-busting,” said the league’s executive director, Luna Banuri, who found that many community members had wanted to avoid getting vaccinated during Ramadan.

“When you are starting the month of fasting, there’s a sense of resolve. … So a lot of folks are trying to make sure that there are no disruptions during that period,” she said. “Even if they believe that they can take the vaccine and it doesn’t affect their fast … (what) they’re not wanting to do is to get sick.”

Medicine and fasting is nothing new. Muslims may forgo fasting if they fall ill and make up for “missed” days at a later time, after Ramadan.

“If you miss a day because of the effects of the vaccine, then that is not a sinful act,” said Ahmed Abdirahman, a respiratory therapist at a Portland hospital and community service coordinator at the Maine Muslim Community Center. “Protecting lives is the ultimate goal in Islam.”

Dr. Hasan Shanawani, president of the American Muslim Health Association, said he’s encouraging everyone to be vaccinated even if that means getting the jab during Ramadan.

A lung specialist, he said he has treated dozens if not hundreds of people with COVID-19 and seen firsthand the horrific toll the disease can take.

“This is not just a decision that weighs on you,” Shanawani said from his office in Michigan. “It weighs on everybody.”

Similar conversations have played out in other countries.

The British Islamic Medical Association circulated a WhatsApp message reassuring people that “taking the Covid-19 vaccines currently licensed in UK does not invalidate the fast during Ramadan as per the opinion of the majority of Islamic scholars.”

Association vice president Dr. Wajid Akhter said there is a growing understanding among Muslims in his community of the importance of not delaying vaccinations due to Ramadan. But for any who may be wavering, he emphasized that COVID-19 represents a threat that cannot be ignored.