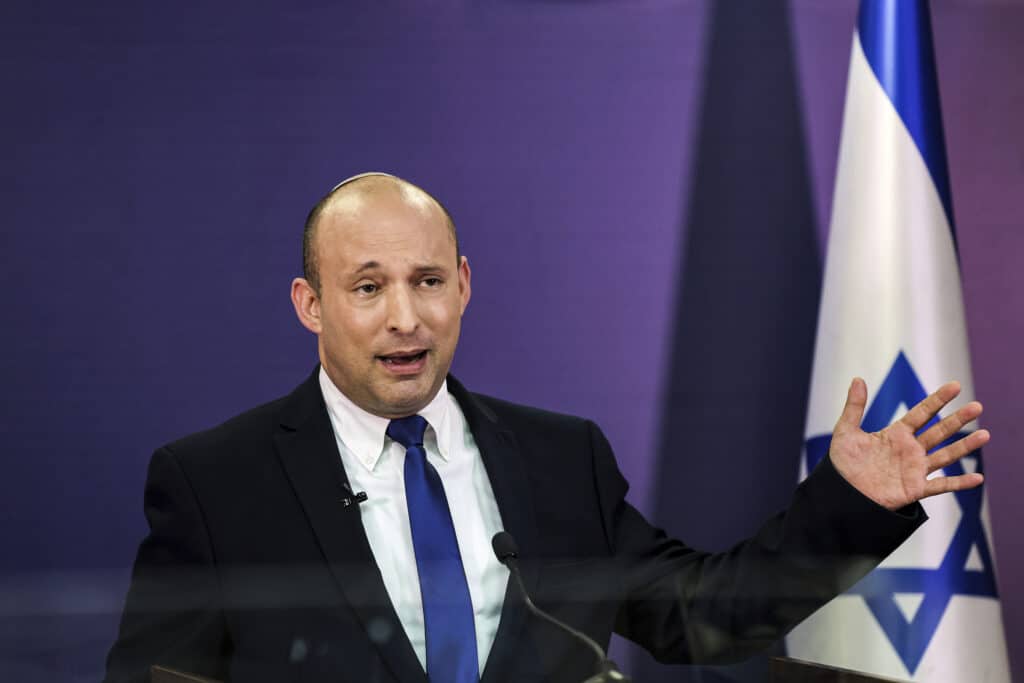 JERUSALEM (AP) — If all goes according to plan, Israel will swear in a new government on Sunday, ending Prime Minister Benjamin Netanyahu’s record 12-year rule and a political crisis that inflicted four elections on the country in less than two years.

The next government, which will be led by the ultra nationalist Naftali Bennett, has vowed to chart a new course aimed at healing the country’s divisions and restoring a sense of normalcy.

Anything more ambitious would be courting disaster.

The coalition consists of eight parties from across Israel’s political spectrum, including a small Arab party that has made history by joining a government for the first time. If even one party bolts, the government would be at serious risk of collapse, and Netanyahu, who intends to stay on as opposition leader, is waiting in the wings.

Here’s a look at what to expect:

The coalition holds only a slight majority in the 120-member Knesset and includes parties from the right, left and center. Each party signed a coalition agreement ahead of a Friday deadline, keeping the transition on track.

But just about the only things they agree on are that Netanyahu, who is on trial for corruption, should leave office, and that the country cannot endure another back-to-back election.

They are expected to adopt a modest agenda acceptable to Israelis from across the ideological divide that steers clear of hot-button issues. Their first big challenge will be to agree on a budget, the first since 2019. Economic reforms and infrastructure spending may follow.

Bennett will serve as prime minister for the first two years, followed by the centrist Yair Lapid, a former journalist who was the driving force behind the coalition. But that’s only if the government survives that long.

Bennett is a religious ultranationalist who supports settlement expansion and is opposed to a Palestinian state. But he risks losing his job if he alienates his dovish coalition partners.

That will likely mean a continuation of Netanyahu’s approach of managing the decades-old conflict without trying to end it. Annexing the occupied West Bank and invading Gaza are probably off the table, but so are any major concessions to the Palestinians.

Every Israeli government has expanded Jewish settlements in the occupied West Bank and east Jerusalem, which Israel captured in the 1967 war and which the Palestinians want for their future state. This government is expected to do so in a subdued way that avoids angering the Biden administration, which is pushing for restraint and an eventual revival of peace talks.

The new government is expected to maintain Netanyahu’s hard-line stance on Iran and oppose President Joe Biden’s efforts to revive its international nuclear deal. But senior officials have already vowed to do so behind closed doors rather than bringing the rift out into the open, as Netanyahu did during the Obama years.

The new government will also likely work with Biden to strengthen ties with Arab states.

The biggest change will likely be felt domestically, as the government struggles to heal the divisions in Israeli society that opened up during the Netanyahu years, between Jews and Arabs and between ultra-Orthodox and secular Israelis.

“The government will work for all the Israeli public — religious, secular, ultra-Orthodox, Arab — without exception, as one,” Bennett said Friday. “We will work together, out of partnership and national responsibility, and I believe we will succeed.”

The United Arab List, a small party with Islamist roots led by Mansour Abbas, is the first Arab party to sit in a coalition. In return for helping to oust Netanyahu, he is expected to secure large budgets for housing, infrastructure and law enforcement in Arab communities.

Israel’s Arab citizens make up 20% of the population and face widespread discrimination. They have close familial ties to the Palestinians and largely identify with their cause, leading many Jewish Israelis to view them with suspicion. Tensions boiled over during last month’s Gaza war, when Jews and Arabs fought in the streets of Israel’s mixed cities.

RETURN OF THE KING?

After a quarter-century at the highest levels of Israeli politics, no one expects the 71-year-old Netanyahu, dubbed the “King of Israel” by his supporters, to quietly retire to his private home in the seaside town of Caesarea.

As opposition leader and the head of the largest party in parliament, Netanyahu is expected to continue doing everything in his power to bring down the government. His best hope for avoiding conviction on serious corruption charges is to battle them from the prime minister’s office, with a governing coalition that could potentially grant him immunity.

But his domineering presence could continue to bind his opponents together. Bennett, already branded a traitor by much of the right-wing base he shares with Netanyahu, heads a tiny party and is unlikely to get another shot at the top job.

Netanyahu could meanwhile face a challenge from within his defeated Likud party, which includes a number of would-be successors. They know that without the polarization around Netanyahu, the Likud would be able to assemble a strong, stable, right-wing government. But Netanyahu retains a strong hold on the party’s institutions and its base, and senior members are unlikely to challenge him unless his downfall is assured. Read more international news

Previous Article
National Security: Films to be censored in Hong Kong
Next Article
Lay movements to be regulated by Vatican to prevent abuses