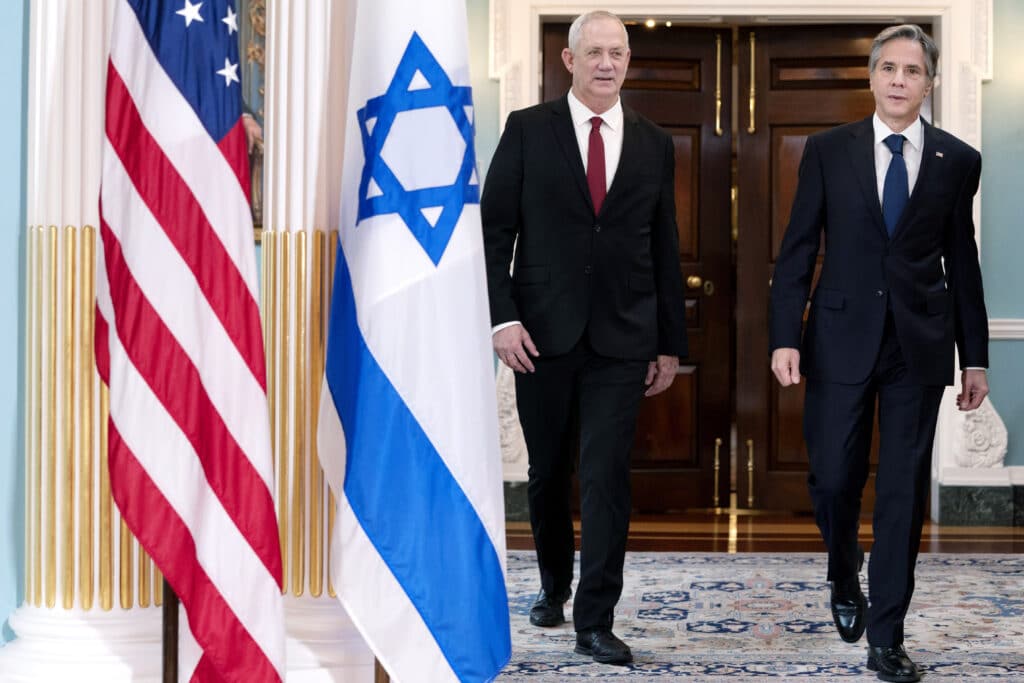 Israel’s visiting defense minister said Thursday that it will stay engaged as the U.S. tries to return to a nuclear deal with Iran, sidestepping what’s long been an area of open disagreement between the United States and the now-jeopardized government of Prime Minister Benjamin Netanyahu.

Benny Gantz told reporters before a meeting with Defense Secretary Lloyd Austin that Iran’s nuclear program and other actions were an “existential threat” to Israel. “Stopping Iran is certainly a shared strategic need of the United States,” Israel and other countries, Gantz said.

But on a visit that came as an opposition coalition back home tries to end Netanyahu’s 12 years in power, Gantz — unlike Netanyahu — stopped short of openly opposing the Biden administration’s efforts to get the United States back into a deal limiting Iran’s nuclear program, in exchange for relief from sanctions.

Sitting across a table from his U.S. counterpart at the Pentagon, Gantz said, “Our dialogue is so important to ensuring that any deal effectively meets its goal of keeping Iran away from nuclear weapons.”

“Of course, given the scope of the threat, Israel must always make sure that it has the ability to protect itself,” Gantz added.

The Israeli official made clear the change in tone was purposeful. “We will continue this important strategic dialogue in private discussion … only, not in the media in a provoking way,” he said, calling for “open dialogue behind closed doors.” It echoed Biden’s own embrace of what the administration has called quiet diplomacy when dealing with Israel.

Netanyahu’s years-long fight to torpedo the Iran nuclear deal — struck during the Obama administration in 2015, but rejected by President Donald Trump after his election — included Netanyahu denouncing it to a 2015 joint session of the U.S. Congress as a “very bad deal.”

Netanyahu has continued that open opposition in recent days, saying a deal “paves the way for Iran to have an arsenal of nuclear weapons with international legitimacy” and that the fight against that was worth any “friction with our great friend the United States.”

Biden has pressed for a return to the nuclear deal as the best way to keep Iran from building up what it says is a civilian nuclear program, and to calm a flashpoint in the Middle East. European negotiators expressed some optimism this week as they closed the latest round of talks in Vienna on getting the U.S. and Iran back in the deal.

Gantz also met with national security adviser Jake Sullivan and Secretary of State Antony Blinken. Gantz is part of the coalition pushing to unseat Netanyahu, and he is expected to remain in his post as defense minister if the government changes.

His meetings Thursday underscored U.S. security commitments to Israel as that country weathers its greatest domestic political upheaval in years and the aftermath of last month’s war with Hamas militants in Gaza.

Gantz said he would lay out for administration officials a “complete plan” for a diplomatic end to hostilities with the Palestinians. He gave no details.

A key aim of Gantz’s visit to Washington was believed to be securing U.S. funding to help restock Israel’s Iron Dome, a sophisticated missile defense system that smacked down many of the rockets Hamas militants fired toward Israel last month. More than 260 people were killed, the vast majority Palestinians, in an 11-day war in which Israel struck targets in Hamas-ruled Gaza with hundreds of airstrikes while Hamas fired more than 4,000 rockets at Israel.

Republican Sen. Lindsey Graham of South Carolina, touring Israel this week in a show of support after the latest Gaza war, said he expected Israelis to seek up to $1 billion from the U.S. for Iron Dome, including for restocking the system’s interception missiles.

U.S. officials made no immediate announcements on funding. Austin noted Biden “has expressed his full support for replenishing Israel’s Iron Dome missile defense system, which saved so many lives.”

“We are committed to maintaining Israel’s qualitative military edge and ensuring that Israel can defend itself,” Austin added.

The U.S. partnership in Israel’s Iron Dome has wide bipartisan support in Congress, as does overall U.S. support for Israel’s defense, a tenet of U.S. foreign policy for decades. Last month’s war, however — the fiercest Israeli-Palestinian fighting since 2014 — has exposed a rift in Biden’s Democratic Party. Progressives and some others demanded a cease-fire by Israel as well as Hamas as Palestinian deaths grew in the crowded Gaza Strip.

Blinken told reporters before meeting with Gantz that Americans also were talking to him about getting aid in to Gaza to help rebuild housing and services damaged and destroyed in the fighting, in addition to discussing Israeli security. Read more international news