JD Gordon: The role of the UN and the illegal immigration 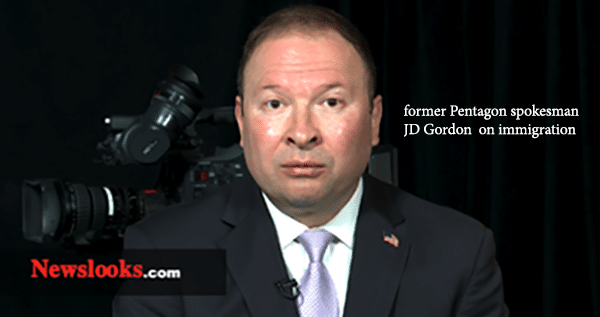 JD Gordon: The role of the UN and the illegal immigration

The most important factor that contributes to the persistence of the problem of illegal immigration across the world is the existence of great differences in the standard of living between peoples of the developed world and peoples of developing countries.

Among the most important solutions that many academics offer to confront the problem of illegal immigration is to work on developing countries, creating job opportunities and improving security for their populations. This can help reduce illegal immigration.

In this intervention, Mr. JD Gordon, a former Pentagon spokesman, gives his opinion on the role the United Nations can play in better responding to worldwide mass migrations.

J.D. Gordon is a former Pentagon spokesman who served in the Office of the Secretary of Defense during the George W. Bush Administration under Secretaries Donald Rumsfeld and Robert Gates.  He later became a senior national security and foreign policy adviser to U.S. national political figures including Donald Trump, Mike Huckabee and Herman Cain.

Gordon has represented multiple think tanks and foundations based in Washington, DC as a senior fellow and adviser. He has been a columnist and contributor to The Washington Times, The Daily Caller, The Hill and USA Today, as well as a television commentator with One America News (OAN), Newsmax, Fox News, Sky News, Univision and Telemundo. Guest speaker appearances have included the U.S. Congress, various national and international parliaments, universities including Oxford and Georgetown, as well as conferences and summits in over a dozen countries on three continents.

Born in New York City, Gordon was raised at the New Jersey Shore where he graduated from Wall High School. He was commissioned as an Ensign through the Naval Reserve Officers Training Corps program at Penn State where he received a B.A. in Communications. Gordon also holds an M.A. in Diplomacy from Norwich University, a Senior Executive Certificate from the Program on Negotiation at Harvard Law School and is a graduate of the U.S. Air Force’s Air Command and Staff College.