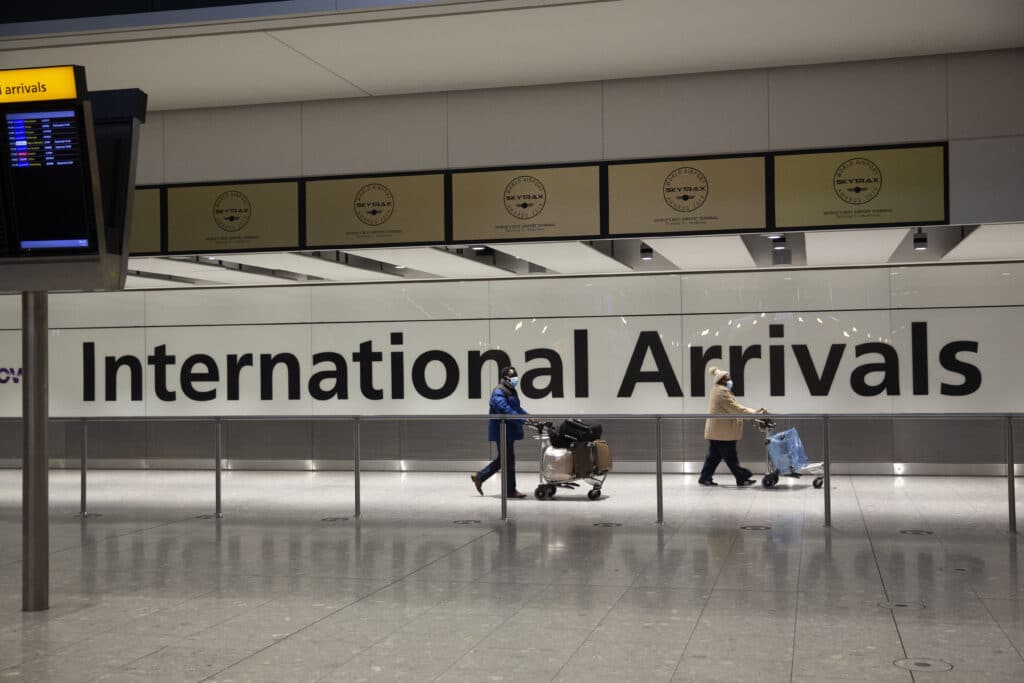 London’s Heathrow Airport has designated a terminal for travelers from 43 coronavirus hotspots around the world. They will be required to quarantine in a government-approved hotel for 10 days. The Associated Press has the story:

LONDON (AP) — A terminal at London’s Heathrow Airport that was mothballed because of the coronavirus pandemic reopened Tuesday to serve passengers arriving from high-risk countries — an action that critics said was long overdue.

Britain has barred travelers from a “red list” of 43 coronavirus hotspots including India, Brazil, Turkey and South Africa, fearing they could bring in worrisome virus variants. U.K. citizens and residents who return from those countries face a mandatory 10-day supervised quarantine in a government-approved hotel.

Critics, however, have complained that red list passengers have been using the same airport arrivals hall as thousands of travelers from other destinations, though in separate lines, since hotel quarantines were introduced in February. Some arriving passengers have described hours-long waits at Heathrow’s passport control in crowded conditions.

Heathrow said in a statement that it had set up the new arrivals facility because “red list routes will likely be a feature of U.K. travel for the foreseeable future.”

The Public and Commercial Services Union, which represents border staff, said the decision had been made “at extremely short notice, meaning key social distancing procedures are not in place.”

“This is another poorly planned initiative that will be understaffed and rely on volunteers to do overtime, to avoid mounting queues,” the union said.

The U.K. has recorded almost 128,000 coronavirus deaths, the highest toll in Europe. A mass vaccination campaign that started in December has brought new infections and deaths down sharply, but case numbers are once again rising as a more transmissible virus variant, named Delta by the World Health Organization and first identified in India, spreads across the U.K.

On Tuesday, the government reported a further 3,165 confirmed COVID-19 cases, compared to about 2,500 cases last week. But Britain recorded no coronavirus deaths on Tuesday for the first time since July. Apart from July 30, there have been no days without officially recorded COVID-19 deaths since March 2020.

Still, rising case numbers have cast doubt on the Conservative government’s plans to lift social distancing rules and remaining pandemic-related restrictions on June 21. Many scientists are urging a delay, arguing that more people need to be vaccinated before measures can be eased safely.

Three-quarters of U.K. adults have had one dose of a coronavirus vaccine so far, and almost half have had both doses. Pop-up clinics have been set up as part of a “surge vaccination” campaign in hotspot areas, including one that inoculated thousands of people Monday at London’s Twickenham rugby stadium.

On Tuesday, the Scottish government, which controls its own health policy, said it would be cautious and delay plans to ease restrictions in the most populous parts of the country because cases are rising.

“This is a pause, not a step backwards,” First Minister Nicola Sturgeon said.

The U.K. government says it will announce on June 14 whether the latest relaxation for England will be delayed.

“It is a quite perilous moment, but we’ve just got to keep our fingers crossed that the measures work,” he told the BBC.