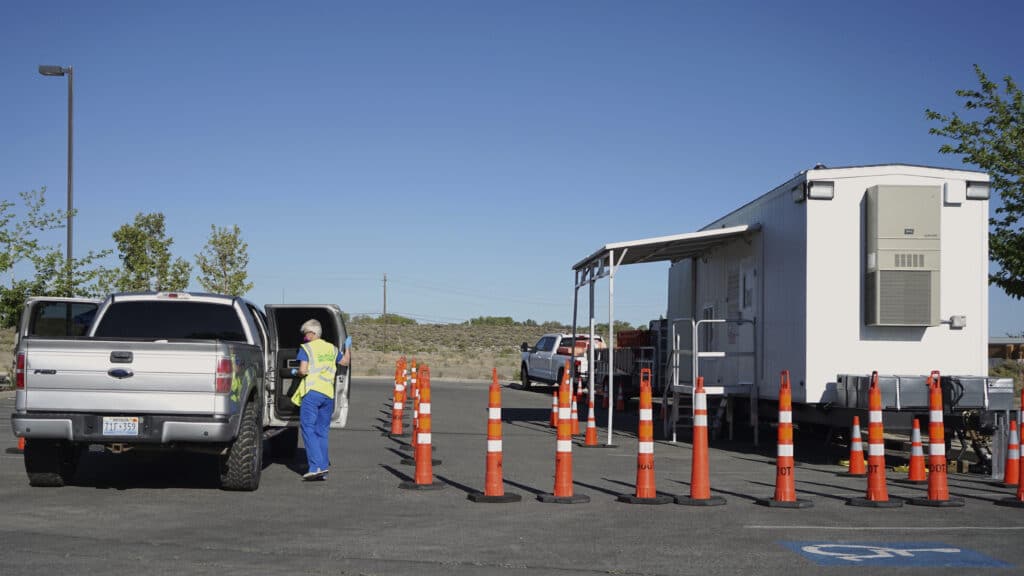 The government is getting more creative at reaching its goal of vaccinating 75% of the U.S. population, the level believed necessary to reach herd immunity. Now the Federal Emergency Management Agency is dispatching mobile vans with COVID-19 vaccinations to rural areas where it’s not convenient for people to get the vaccine otherwise. The Associated Press has the story:

Government trying to vaccinate 75% of the population; takes vans to small towns

FALLON, Nev. (AP) — Pick-up truck drivers motor up to a white trailer in a parking lot on Fallon Paiute-Shoshone land in Nevada’s high desert and within a few moments they’re handed forms to sign, jabbed with coronavirus vaccine and sent on their way.

The pop-up clinic 60 miles (96 kilometers) east of Reno is one of 28 locations in the state where the Federal Emergency Management Agency has dispatched mobile vaccination units to ensure people in far-flung rural areas and one stop-light towns can get inoculated.

It’s one of the tactics health officials are using across the country to counter waning interest in vaccinations. In tiny towns, churches, ballparks, strip clubs and even marijuana dispensaries, officials are setting up shop and offering incentives to entice people as the nation struggles to reach herd immunity.

In Nevada, health officials acknowledge they’re unlikely to hit their initial goal of vaccinating 75% of the population believed necessary to reach herd immunity. Ironically, their push in northern Nevada is headquartered at the Reno Livestock Events Center, where 65-year-old Dan Lavely and others are showing up for shots.

Lavely said he teared up while thanking the nurses who vaccinated him.

“I told them I was just so thankful that they were volunteering their time to help get us back to normal so I can go shop at the mall or go to the beach at Lake Tahoe,” said Lavely, who works at a big box store in neighboring Sparks. Waiting to get vaccinated had nothing to do with safety concerns or distrust of the government, he said.

“It was a scheduling deal. Plus, my middle name is procrastinator,” Lavely said.

Two FEMA mobile trailers have meandered through Nevada to towns without pharmacies, clinics or other vaccination sites, giving doctors, nurses and National Guardsmen a first-hand look at rural and tribal communities where finding vaccinations has been difficult for residents.

“That’s our philosophy: it doesn’t make any difference if there are two (people) nor 200,” said Peggy Franklin, a volunteer nurse who has traveled alongside a FEMA trailer to Fallon, Alamo, Panaca and other towns

To preserve the vaccine, the trailers are equipped with ultra-cold refrigerators powered by generators-on-wheels. On Monday, the two mobile clinics completed six-week loops through Nevada that included returning to finish two-shot regimens in the state that covers an area that would stretch from Boston to Baltimore and Buffalo, N.Y.

Goal of vaccinating 250 people at each stop

Initially, the goal was to vaccinate 250 people a day at each stop. But the numbers have varied, as vaccine supply has increased and demand has fallen.

“Just a month ago, people were still having a hard time finding vaccination sites. That’s really changed in the last three or four weeks and now we’re trying to find people that are more vaccine-hesitant,” said Marc Reynolds, a doctor from Fallon who has volunteered at the mobile clinic in his hometown and the state prison in Lovelock.

The clinics have delivered 7,600 shots during two tours of Nevada and have also been used in Arizona, Illinois, Kentucky and other states. Nevada Division of Emergency Management Chief Dave Fogerson said people in the remote communities of the state “probably would not have got it any other way.”

Gerlach, for example, is 100 miles (160 km) from the closest pharmacy in Reno-Sparks. With just 34 people, it was once home to a booming gypsum mine on the edge of the desert that hosts 80,000 visitors each year for the Burning Man Festival. The desolate landscape was featured in this year’s Academy Award-winning movie, “Nomadland.”

Nearly half of Nevada’s eligible population has had at least an initial vaccination against COVID-19. But rates have varied geographically.

In Clark and Washoe counties, home to Las Vegas and Reno, respectively, about half of those eligible have gotten at least one dose, the state reported. The rate has been about half of that in Eureka and Elko counties, while Storey County has seen just a 15% rate.

As infection rates drop and the state moves further away from the height of the pandemic, officials acknowledge persuading the vaccine-hesitant to get shots won’t get easier. As a result, on the heels of the FEMA effort, officials have been preparing similar pop-up events in urban centers, suburban neighborhoods and unconventional venues ranging from a Las Vegas strip club to a Sparks truck stop along an interstate that runs to Utah.

“It’s important that the people running the vaccination events look like the community,” said Jeanne Freeman of Carson City Health and Human Services. “Comfort levels are important. Sometimes just being in a familiar location.”

Nevada has one of the nation’s worst vaccination rates

Nevada has long struggled with some of the nation’s worst vaccination rates. It improved to fifth-worst last year with 42% of adults vaccinated against the flu, according to the CDC. Part of the current outreach effort targets the 340,000 people who got those flu shots but have not yet gotten a COVID-19 vaccination.

Nevada is refining its messaging based on a growing understanding of why some people remain reluctant to get shots. Much of the focus so far has been on cultural and historical barriers that make certain groups less open to vaccinations, but for many, it may come down to simple convenience.

“A lot of individuals are not opposed to getting vaccinated, it’s just not fitting well in their daily life,” said Karissa Loper, chief of Nevada’s Bureau of Child, Family and Community Wellness. “That’s truly what we’re moving to work on now with all of our partners, to do those mobile and pop-up clinics.”

Jackie Shelton, a vice president with the public relations firm that Nevada hired to help promote vaccine equity and outreach, said the latest ad campaign intends to “show people who look like you — peers who are getting the vaccine and why.”

“People don’t want to be told what to do but they love to see their friends and others talking about why they are doing it,” she said. “It’s all about empathy. And reminding people what they have missed during the pandemic and what they can get back.”

Immunize Nevada is planning vaccination pop-ups at breweries, churches and parks — complete with swag like water bottles — and scheduling them to coincide with holidays such as Juneteenth to target specific populations.

In Reno, shots are offered at minor league baseball games, and the Medical Social Justice League at the University of Nevada’s School of Medicine was set to co-host a clinic Saturday at a Catholic church with a large Latino congregation.

“We need to meet them where they are and where they feel safe,” Diana Sande, spokeswoman for the university’s School of Community Health Sciences, said about outreach efforts to the Latino community.

Kyra Morgan, Nevada’s chief biostatistician, has suggested it may not be possible for the state to reach its initial goal of vaccinating 75% of the population.

Still, communities may be able to return to normalcy even if they don’t reach the threshold needed for herd immunity, added Dr. Nancy Diao, division director for epidemiology and public health preparedness in Washoe County.

“If we can reach a high enough population level, say maybe 60% or 70%, that might also just be good enough for our community to bring the numbers drastically down,” she said, “and we can have this virus live with us in an equilibrium like we do with so many other diseases.”

By SCOTT SONNER and SAM METZ

Sonner reported from Reno. Metz is a corps member for the Associated Press/Report for America Statehouse News Initiative. Report for America is a nonprofit national service program that places journalists in newsrooms to report on undercovered issues.