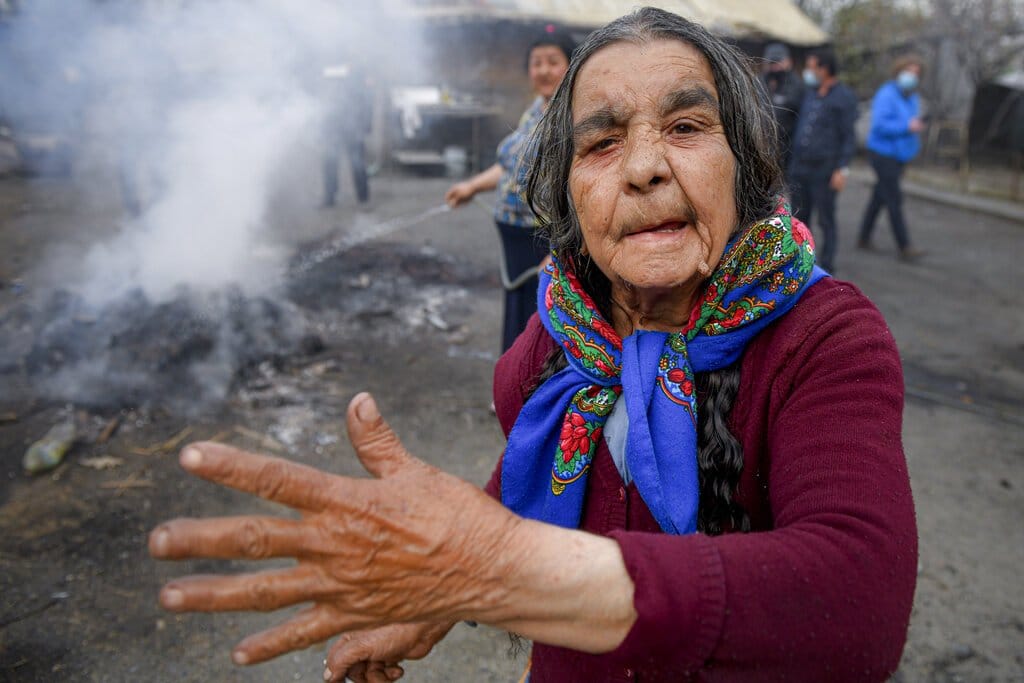 In Romania, the Roma people, also known as gypsies, struggle to survive. Without education or proper resources, they resort to burning plastic and metal, which they can sell for money. The Associated Press has the story:

The nomadic Roma in Romania forge a difficult living, burning metals and plastics for money

VIDRA, Romania (AP) — In the trash-strewn slums of Sintesti, less than 10 miles from Romania’s capital, Mihai Bratu scrapes a dangerous living for his Roma family amid the foul reek of burning plastic that cloys the air day and night.

Like many in this community, for him illegally setting fire to whatever he can find that contains metal — from computers to tires to electrical cables — seems like his only means of survival.

“We’re selling it to people who buy metal, we are poor people … we have to work hard for a week or two to get one kilogram of metal,” 34-year-old Bratu, perched on an old wooden cart, told The Associated Press. “We are struggling to feed our kids … The rich people have the villas, look at the rich people’s palaces.”

You don’t have to look far.

The main road that runs through Sintesti, a largely Roma village in the Vidra commune, is lined with ornate, semi-constructed villas and dotted with shiny SUVs. Behind lurk the parts where Bratu and his young children live, a social black hole with no sanitation or running water. The two worlds are strongly connected.

For Octavian Berceanu, the new head of Romania’s National Environmental Guard, the government environmental protection agency, the pollution from the fires that burn here almost ceaselessly, in breach of environmental laws, was so bad that he started regular raids in the community — where he says “mafia structures” lord it over “modern slaves.”

“This is a kind of slavery, because the people living here have no opportunity for school, to get a job in the city, which is very close, they don’t have infrastructure like an official power grid, water, roads — and that is destroying their perspective on life,” Berceanu told The Associated Press during a police-escorted tour in April.

The slums of Sintesti, like Roma communities elsewhere, have long been ignored by authorities. They’re made up of makeshift homes, where unofficially rigged electricity cables hug the ground and run over a sea of trash.

Related: France, It’s Time to Confront The Colonial Past

“For too many years, they were allowed in some way to do this dirty job,” Berceanu said. “Nobody came here in the past … to see what’s happening.”

But on top of the considerable social ills, according to the environment chief, the fires can significantly hike pollution in Bucharest, potentially by as much as 20-30%, at times pushing air quality to dangerous levels.

“The smoke particulates are taken by the wind 10 miles, it’s like rain over Bucharest and it’s destroying the quality of the air in the capital. It’s one hundred times more dangerous than wood-fire particles — there are a lot of toxic components,” Berceanu said.

“If the local authorities are not applying the law, of course people — whatever their ethnic origin — are encouraged to continue doing what they are doing,” said Gelu Duminica, a sociologist and executive director of the Impreuna Agency, a Roma-focused non-governmental organization.

Focusing on pollution from the Roma community, Duminica says, instead of on big industry or the more than 1 million cars in the densely populated capital of 2 million, is “scapegoating” and part of a political “branding campaign.”

“Everywhere in the world, the poorest are exploiting the marginal resources in order to survive. We have a chain of causes: low education, low infrastructure, low development … a lot of things are low,” Duminica said

The Council of Europe estimates that 1.85 million Roma live in the country of more than 19 million, and face many challenges. A 2016 human rights report published by the European Commission, said that “systematic societal discrimination against Roma” affected their access to adequate education, housing, health care, and employment.

In January this year, Romanian President Klaus Iohannis promulgated a law making anti-Roma hate crimes — verbal or physical — punishable by up to 10 years in prison.

In the future, Berceanu the environment chief hopes surveillance drones with pollution sensors and infrared cameras can help paint a clearer picture of how the networks operate.

“We’re working against organized crime and it’s very hard,” he said. “If we solve this problem here, very close to Bucharest, we can solve any kind of problem similar to this all around the country.”

For local resident Floria, who refused to give a surname but said she was 40-something, a lack of official documents, education, and options leave her and her community with no alternatives.

“We don’t want to do this. Why don’t they give us jobs like (communist dictator Nicolae) Ceausescu used to, they would come with buses, with cars, and take us to town to work,” she told The Associated Press. “Gypsies are seen as the worst people no matter where we go or what we do.”

Mihai Bratu blames local authorities for the plight of his community, for the lack of roads, the lack of action.

“The mayor doesn’t help us!” he exclaims, as a small boy shifts building materials from Bratu’s horse cart to the muddy yard next door.

“What do we have? What can we have? Some little house? — whatever God granted us.”

Previous Article
Syrian missile not intentional, Israel says
Next Article
When do COVID-19 vaccines wear off?