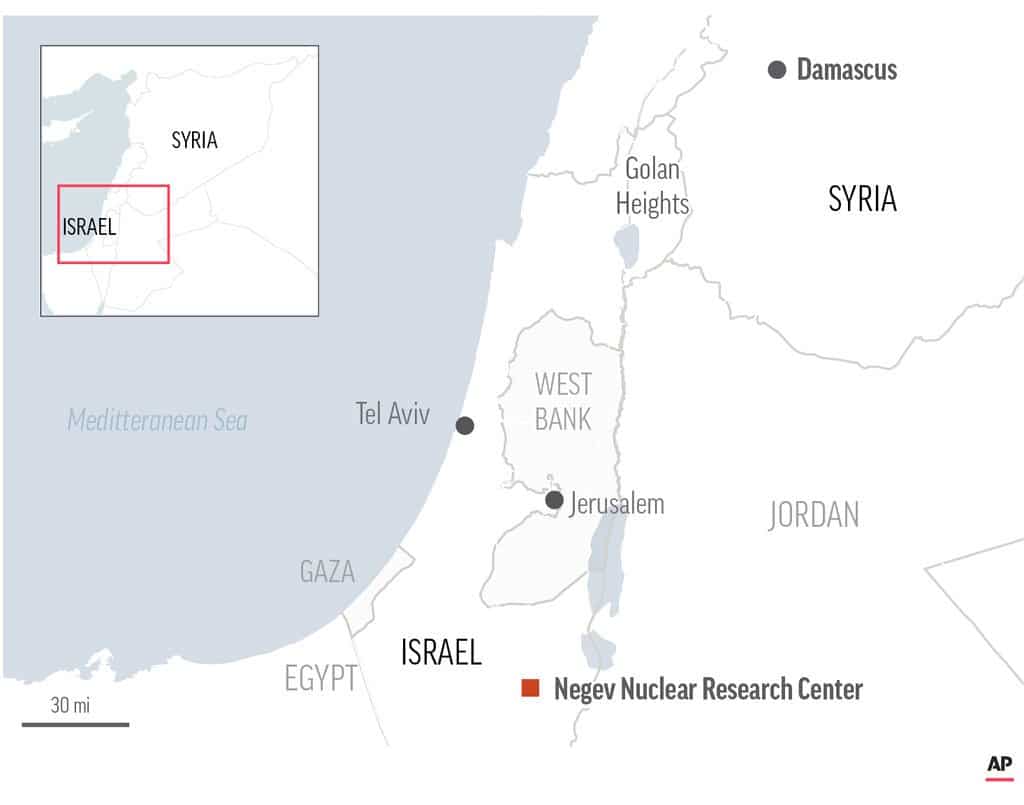 A missile from Syria that landed deep inside Israel, setting off air raid sirens, was the result of a misfire, according to the Israeli military. Gen. Frank McKenzie, head of U.S. Central Command, said it was due to incompetence by Syrian air defense. The Associated Press has the story:

JERUSALEM (AP) — The Israeli military said Thursday that a Syrian missile that reached deep into Israeli territory and set off air raid sirens near the country’s top-secret nuclear reactor was the result of a misfire and not a deliberate attack.

The missile landed in southern Israel early Thursday, prompting Israel to respond with airstrikes on the missile launcher and other targets in Syria.

The army’s chief spokesman, Brig. Gen. Hidai Zilberman, was quoted as telling military correspondents that the Israeli air force was already operating in Syrian airspace when the anti-aircraft missile was fired. He said the projectile, identified as a Russian-made SA-5 missile, missed its target and exploded in southern Israel.

The missile, also known as an S200, set off air raid sirens in a village near Dimona, the southern desert town where Israel’s nuclear reactor is located, and some 300 kilometers (200 miles) south of Damascus.

Related: Israeli Strike Near Damascus in Retaliation to Syrian Missile

“There was no intention of hitting the nuclear reactor in Dimona,” Zilberman was quoted as saying.

An Israeli missile-defense system tried but failed to intercept the incoming missile. Defense Minister Benny Gantz said the incident was under investigation.

“I think it reflects, actually, incompetence in Syrian air defense, where they were responding to Israeli strikes on targets in Syria. The fired their missiles, the missiles went ballistic, literally, and followed a parabolic trajectory to Israel,” he said. “I do not believe it was an intentional attack, but just rather a lack of capability on the part of the Syrian air defenders.”

In recent years, Israel has repeatedly launched air strikes at Syria, including at military targets linked to foes Iran and the Lebanese Hezbollah militia, both allies of Syrian President Bashar Assad. Such strikes routinely draw Syrian anti-aircraft fire. Thursday’s exchange was unusual because the Syrian projectile landed deep inside Israel.

Syria’s state news agency SANA said the exchange began with an Israeli air strike on Dumeir, a suburb of the capital, Damascus. Dumeir is believed to house Syrian army installations and batteries as well as bases and weapons depots belonging to Iran-backed militias. SANA said four soldiers were wounded.

Syrian media made no mention of an anti-aircraft missile landing deep inside Israel.

The air raid sirens were sounded in Abu Krinat, a village near Dimona. Explosions heard across Israel might have been the air-defense systems.

Apparent missile fragments were found in a swimming pool in Ashalim, a community approximately 20 miles (32 kilometers) southwest of Dimona. Israeli troops arrived at the scene and collected the fragments. There were no reports of damage or injuries.

The exchange of fire also threatened to complicate U.S.-led attempts to revive the international nuclear deal with Iran, to which Israel is deeply opposed.