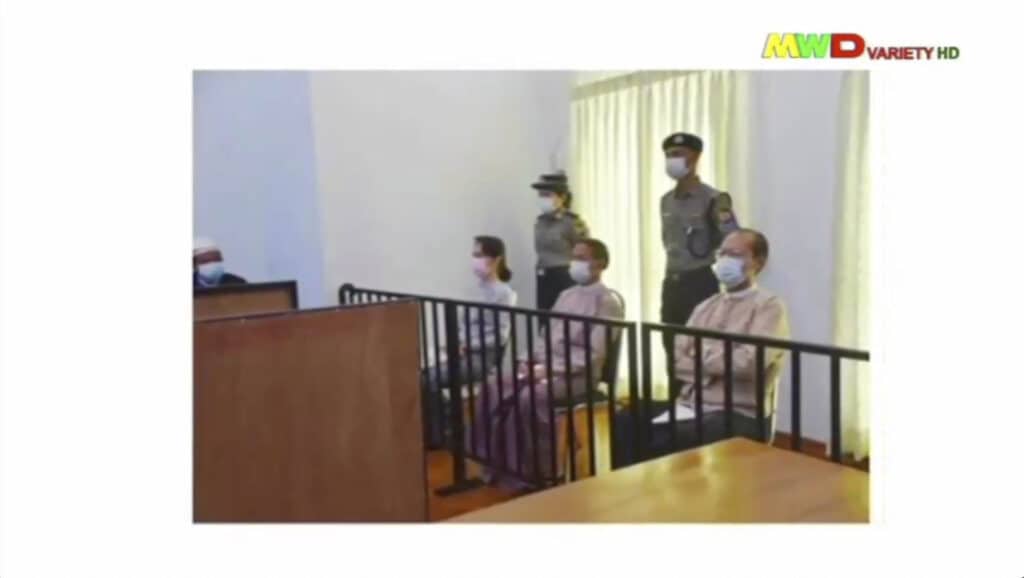 The ousted leader of Myanmar, Aung San Suu Kyi, appeared in court for the first time on Monday. She was arrested in February after the military took power. She is facing charges like breaching the colonial-era Official Secrets Act, which carries a penalty of up to 14 years’ imprisonment. The Associated Press has the story:

Aung San Suu Kyi, arrested after being ousted as leader of Myanmar, appears in court for the first time since the military took over

BANGKOK (AP) — Myanmar’s ousted leader, Aung San Suu Kyi, appeared in court in person on Monday for the first time since the military arrested her when it seized power on Feb. 1.

Myanmar state television MRTV broadcast on its evening news program the first photo of Suu Kyi, 75, since the coup. It showed her sitting straight-backed in a small courtroom, wearing a pink face-mask, her hands folded in her lap. Alongside her were her two co-defendants, former President Win Myint and Myo Aung, the former mayor of Naypyitaw, Myanmar’s capital.

One of their lawyers, Min Min Soe, told The Associated Press by phone that the three were able to meet with their defense team for about 30 minutes before the hearing began at a special court set up inside Naypyitaw’s city council building.

Suu Kyi’s only previous court appearances have been by video link and she had not been allowed to meet in person with any of her lawyers.

Min Min Soe said Suu Kyi wanted to tell Myanmar’s people that her National League for Democracy party will stand by them.

She said that “since the NLD was founded for the people, the NLD will exist as long as the people exist,” Min Min Soe said after the hearing. She appeared to be referring to the ruling junta’s threat to dissolve the party.

“I also hope the NLD will survive because this is the will of the people,” she told a virtual press conference at U.N. headquarters in New York, noting that the NLD received 82% of the vote in November’s election.

Thein Hlaing Tun, a lawyer representing Myo Aung, was arrested after the hearing on a charge of spreading information that could cause unrest.

Monday’s hearing was largely procedural. The defense lawyers said their discussions with Suu Kyi involved all the charges against her. State television said the hearing concerned the charge against all three defendants of spreading information that could cause public alarm or unrest.

Suu Kyi also faces two counts of violating the Natural Disaster Management Law for allegedly violating COVID-19 pandemic restrictions during the 2020 election campaign; illegally importing walkie-talkies that were for her bodyguards’ use; and unlicensed use of the radios.

The most serious charge that Suu Kyi faces is breaching the colonial-era Official Secrets Act, which carries a penalty of up to 14 years’ imprisonment, but that is being handled by a separate court.

Suu Kyi’s supporters say the proceedings are politically motivated and are meant to discredit her and legitimize the military’s seizure of power. If convicted of any of the offenses, she could be banned from running in the election that the junta has pledged to hold within one or two years of its takeover.

Also Monday, an American journalist working for a Myanmar news magazine was detained at Yangon’s airport as he was preparing to board a flight to Malaysia. Frontier Myanmar said it does not know why its managing editor, Danny Fenster, was detained. The junta has arrested about 80 journalists, roughly half of whom remain detained awaiting charges or trial.

The military ousted Suu Kyi’s government after her party won a landslide victory in a general election last November that would have given it a second five-year term in office. Before the start of democratic reforms a decade ago, Myanmar was ruled by the military for 50 years.

The junta claims it was justified in taking power because of alleged widespread election fraud, especially irregularities in voting lists. The Asian Network for Free Elections, a non-partisan poll watching organization, in a report issued last week rejected the military’s allegations of massive fraud, saying the results of the voting were representative of the will of the people.

The junta has accused Suu Kyi of corruption and presented on state television what it said was evidence that she took bribes, but has so far only said it intends to pursue charges for that offense. Her lawyers dismiss the allegations.

Several cases are also pending against other senior members of Suu Kyi’s party.

According to Myanmar’s Assistance Association for Political Prisoners, which has been keeping a detailed tally of arrests and deaths since the coup, almost 4,300 people are in detention, including 95 who have already been sentenced.

Resistance to military rule is widespread. About 100 young people gathered Monday in a lightning protest in Yangon, the country’s biggest city, carrying banners and chanting pro-democracy slogans before hurriedly dispersing.

Flash mobs have replaced the mass demonstrations that were held in February and March because of the deadly response of security forces.

According to the Assistance Association, 818 protesters and bystanders have been killed by security personnel since the coup.

Junta chief Senior Gen. Min Aung Hlaing said in an interview last week with Hong Kong-based Phoenix Television that the death toll had been exaggerated and was actually about 300, and that 47 police had been killed and more then 200 injured..

Most resistance to the junta is still non-violent, particularly in a boycott of public schools, but armed resistance appears to be growing.

There are reports virtually every day of small homemade explosives being set off in Yangon and elsewhere, and of some killings of alleged informers and local administrators appointed by the junta.

Reports on social media over the weekend said there was heavy fighting between security forces and members of a grassroots anti-junta People’s Defense Force in Kayah state — also known as Karenni state — in eastern Myanmar. Such reports, especially in remote areas, are difficult to independently verify.

As many as 40 members of the security forces were killed in joint attacks launched by the People’s Defense Force and ethnic Karenni guerrillas, online news services The Irrawaddy and Myanmar Now reported. The Irrawaddy also said four civilians were killed when artillery fired by government forces hit a Catholic church in Kayah.

Previous Article
US bans government officials from Ethiopia, Eritrea
Next Article
Killer caught in South Carolina after week on the run