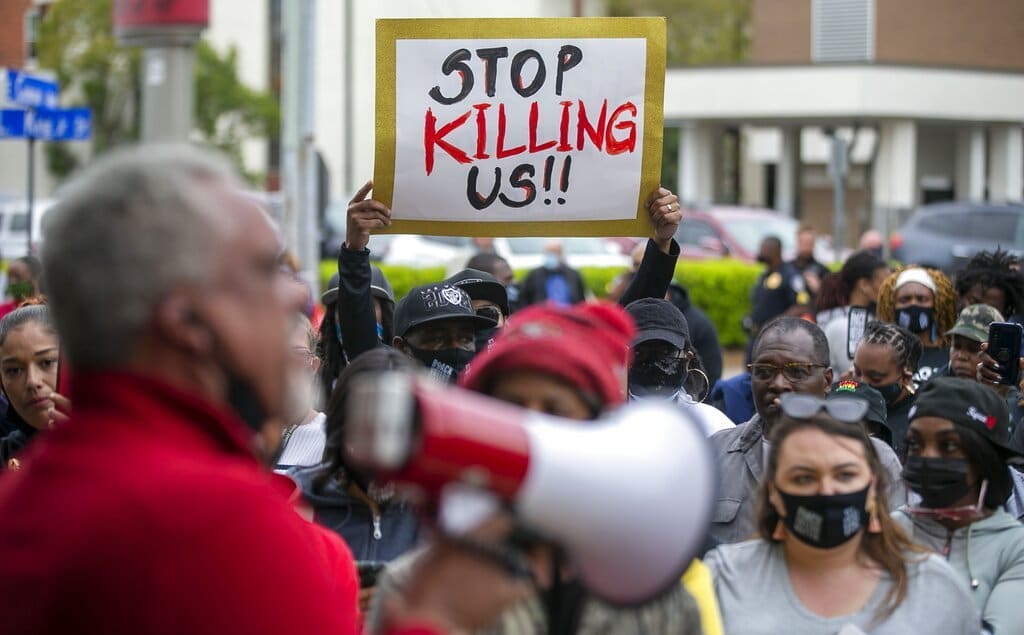 A recording revealed that an informant had earlier sold cocaine and methamphetamine to a black man fatally shot by deputies in North Carolina. Protests started after Andrew Brown Jr. was shot in the back by deputies last Wednesday in Elizabeth City. The Associated Press has the story:

ELIZABETH CITY, N.C. (AP) — North Carolina deputies who fatally shot a Black man outside of his house obtained the search warrant that brought them there after investigators recorded him selling small amounts of cocaine and methamphetamine to an informant, according to court documents released Monday.

The fatal shooting of Andrew Brown Jr. last Wednesday in Elizabeth City has prompted days of protests, calls for the public release of deputy body camera video and civil rights leaders decrying that warrants shouldn’t lead to a fatal shooting. Signs including emergency scanner traffic and an eyewitness account indicate that Brown was shot in the back as he was trying to drive away. Authorities have released few details.

Brown’s family had hoped to have a private viewing of the body camera video on Monday morning, but county officials indicated that would be delayed because they were working on blurring some faces in the recording.

Civil rights attorney Benjamin Crump, who’s among lawyers representing Brown’s family, told reporters Monday morning that the delay is meant to protect law enforcement officers at the same time as they release the warrants with negative details about Brown.

“Now, you all may have noticed that they released a warrant saying all kinds of things about Andrew Brown, but they want to redact the face of the … officers that killed Andrew Brown,” he said, adding that law officials blurring deputies’ faces are “going to protect them and not show their face and not say their names … because what they want to do is assassinate the character” of Brown.

Pasquotank County Sheriff Tommy Wooten II has said that multiple deputies fired shots. Elizabeth City police were not involved in the shooting. Seven deputies are on leave pending a probe by the State Bureau of Investigation.

The warrant released Monday was obtained by the Pasquotank County sheriff’s office and signed by a local judge to allow the search of Brown’s Elizabeth City home. It said that an investigator in nearby Dare County was told by the informant that the person had been purchasing crack cocaine and other drugs for over a year from Brown. The informant described purchasing drugs at the house that was the target of the search.

The warrant said that in March, local narcotics officers used the informant to conduct controlled purchases of methamphetamine and cocaine from Brown on two separate occasions. The warrant says both drug transactions were recorded using audio and video equipment.

The search warrant said investigators believed Brown was storing drugs in the home or two vehicles. The document, which indicated the search wasn’t completed, didn’t list anything found.

The arrest warrants, which were released last week, charged him with possession with intent to sell and deliver 3 grams of each of the drugs.

Calls are growing to release the video footage

Calls have been growing to release deputy body camera footage of the incident, which is not public record in North Carolina. A judge must generally sign off on any release of body camera video. Wooten has said he would ask a local judge as early as Monday to allow the release of the footage. A coalition of media has also petitioned the court for its release, and city officials also plan to.

Short of releasing it publicly, state law allows law enforcement to show body camera video privately to a victim’s family. County officials said Monday they will show the video to family after blurring out some of the faces in the video to protect an active internal investigation.

“As soon as these redactions are complete, we will allow the family to view this footage,” Pasquotank County Attorney R. Michael Cox said in a statement. “We hope this occurs today, but the actual time will be driven by the completion of the redactions.”

Also Monday, Elizabeth City officials declared a state of emergency amid concerns about how demonstrators would react to a possible video release. Protests since the shooting in the eastern North Carolina town of about 18,000 have generally been peaceful.

Previous Article
Analysis: New round of violence in Jerusalem
Next Article
Tribute to French police official killed by terrorist