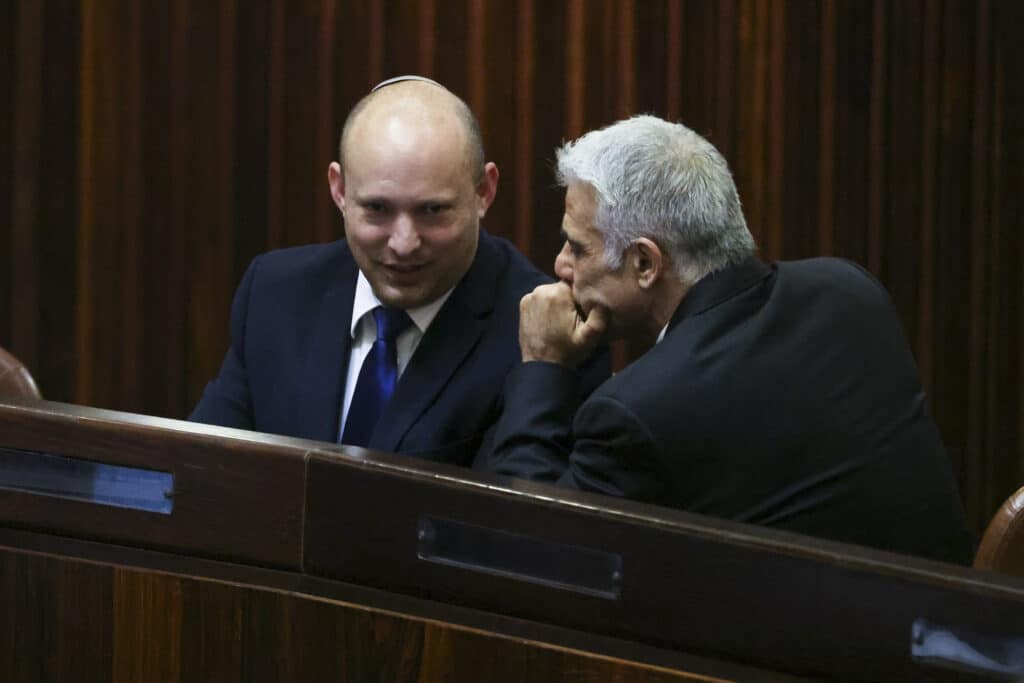 It looks all but done that Prime Minister Benjamin Netanyahu’s tenure as prime minister of Israel has come to an end. His opponents have put together a coalition team to replace him, and now just need parliament to vote to approve it. The Associated Press has the story:

Anti-Netanyahu coalition reaches agreement, sets up vote to remove him

The latest political maneuvering began just hours after opposition leader Yair Lapid and his main coalition partner, Naftali Bennett, declared they had reached a deal to form a new government and muster a majority in the 120-member Knesset, or parliament.

The coalition consists of eight parties from across the political spectrum with little in common except the shared goal of toppling Netanyahu after his record-setting 12 years in power. The alliance includes hard-liners previously allied with Netanyahu, as well as center-left parties and even an Arab faction — a first in Israeli politics.

But the fragile coalition still faces a tough road ahead — it was not able to unseat the parliament speaker, a Netanyahu ally, later on Thursday and it remained unclear how events would play out over the next few days.

Netanyahu lashed out at his foes on Thursday, signaling that he will continue to exert pressure on former allies who joined the coalition. “All members of Knesset who were elected with right-wing votes need to oppose this dangerous leftist government,” he wrote on Twitter.

Bennett, who is slated to become prime minister, has come under heavy pressure from Israeli hard-liners who accuse him of betrayal. He heads Yamina, a small right-wing party that appeals to religious, nationalist voters. But he has also said that all members of the emerging coalition will have to be flexible and pragmatic.

In a televised interview, Bennett said he would never agree to freeze construction in Jewish settlements in the occupied West Bank, which is seen by the Palestinians and much of the international community as a major obstacle to peace.

“There will be no freezes,” he said, acknowledging the international community will push for one. “Look, there will be pressures. We will have to manage,” he told Channel 12 TV.

“My attitude on this topic is to minimize the conflict. We will not solve it,” he said, adding that it was more realistic to improve business ties and the quality of life for Palestinians.

Israel’s political drama has riveted Israelis at a time when tumult has not been in short supply: four inconclusive elections in two years followed by an 11-day war in the Gaza Strip last month that was accompanied by mob violence between Jews and Arabs in cities across the country. The country also is emerging from the coronavirus crisis that caused deep economic damage and exposed tensions between the secular majority and the ultra-Orthodox minority.

Yet the political debate has focused squarely on Netanyahu, who is facing corruption charges — and whether he should stay or go.

“We never had a coalition like this,” said Hillel Bar Sadeh at a coffee shop in Jerusalem. “We like to have a new spirit, we like to have some unity.”

The owner of the coffee shop, Yosi Zarifi, said he trusts that Netanyahu will return to power — and distrusts the coalition.

“Everybody is clear that this trick will not last, there won’t be any glue (to keep it together) here,” he said.

The anti-Netanyahu bloc announced the coalition deal just before a deadline at midnight Wednesday. The agreement triggered a complex process that is likely to stretch over the next week.

The coalition has a razor-thin majority of 61 votes in parliament. On Thursday, it attempted to replace parliament speaker Yariv Levin, in order to speed up the vote on the new government. But the effort failed after Nir Orbach, a lawmaker from Yamina, refused to sign on, underscoring the fragility of the alliance.

Levin can now use his position to delay the vote and give Netanyahu more time to sabotage the coalition.

As the coalition was coming together in recent days, Netanyahu and his supporters ramped up a pressure campaign against former hawkish allies, including Bennett and his No. 2 in the Yamina party, Ayelet Shaked.

Netanyahu accused them of betraying their values. His supporters launched vicious social media campaigns and staged noisy protests outside Shaked’s home. The prime minister’s Likud party also called for a demonstration Thursday night outside the home of Orbach, urging him to quit the coalition.

That’s a taste of the pressure to be expected for lawmakers on the right.

“There will be a lot of pressure, especially on right-wingers, especially for religious right-wingers,” said Gideon Rahat, a political science professor at Hebrew University. “They will go to the synagogue and people will pressure them. It will be a nightmare for some of them.”

Under the coalition agreement, Lapid and Bennett will split the job of prime minister in a rotation. Bennett, a former ally of Netanyahu, is to serve the first two years, while Lapid is to serve the final two years — though it is far from certain their fragile coalition will last that long.

The historic deal also includes a small Islamist party, the United Arab List, which would make it the first Arab party ever to be part of a governing coalition.