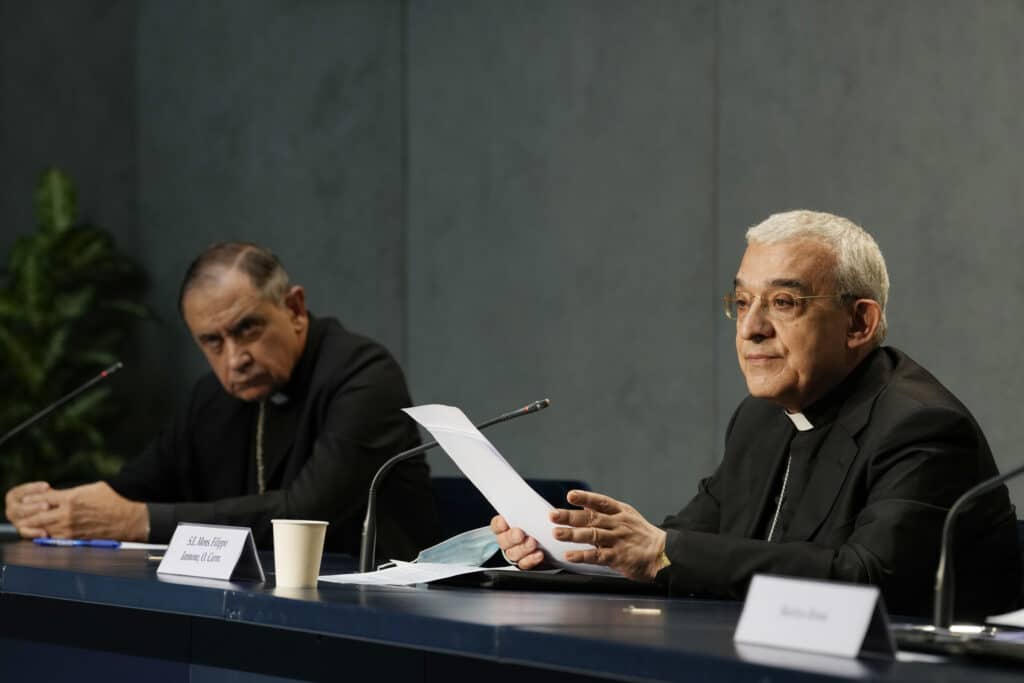 Pope Francis revised the criminal law section of the Vatican’s Code of Canon Law to criminalize sexual abuse of adults by priests and others in authority. It also criminalizes priests grooming minors or vulnerable adults to look at pornography. The Associated Press has the story:

VATICAN CITY (AP) — Pope Francis has changed Catholic Church law to explicitly criminalize the sexual abuse of adults by priests who abuse their authority and to say that laypeople who hold church office also can be sanctioned for similar sex crimes.

The new provisions, released Tuesday after 14 years of study, were contained in the revised criminal law section of the Vatican’s Code of Canon Law, the in-house legal system that covers the 1.3 billion-member Catholic Church and operates independently from civil laws.

The most significant changes are contained in two articles, 1395 and 1398, which aim to address shortcomings in the church’s handling of sexual abuse. The law recognizes that adults, not only children, can be victimized by priests who abuse their authority. The revisions also say that laypeople holding church positions, such as school principals or parish economists, can be punished for abusing minors as well as adults.

The Vatican also criminalized priests “grooming” minors or vulnerable adults to compel them to engage in pornography. The update represents the first time church law has officially recognized as a criminal act the method used by sexual predators to build relationships with victims they have targeted for sexual exploitation.

The new law, which is set to take effect on Dec. 8, also removes much of the discretion that long allowed bishops and religious superiors to ignore or cover up abuse, making clear those in positions of authority will be held responsible if they fail to properly investigate or sanction predator priests.

A bishop can be removed from office for “culpable negligence” or if he does not report sex crimes to church authorities, although the canon law foresees no punishment for failing to to report suspected crimes to police.

Ever since the 1983 code first was issued, lawyers and bishops have complained it was inadequate for dealing with the sexual abuse of minors since it required time-consuming trials. Victims and their advocates, meanwhile, argued the code left too much discretion in the hands of bishops who had an interest in covering up for their priests.

The Vatican issued piecemeal changes over the years to address problems and loopholes, most significantly requiring all cases to be sent to the Holy See for review and allowing for a more streamlined administrative process to defrock a priest if the evidence against him was overwhelming.

More recently, Francis passed new laws to punish bishops and religious superiors who failed to protect their flocks. The new criminal code incorporates those changes and goes beyond them, while also recognizing accused priests are presumed innocent until proven otherwise.

The Vatican has long considered any sexual relations between a priest and an adult as sinful but consensual, believing that adults are able to offer or refuse consent purely by the nature of their age. But amid the #MeToo movement and scandals of seminarians and nuns being sexually abused by their superiors, the Vatican has come to realize that adults can be victimized, if there is a power imbalance in the relationship.

That dynamic was most clearly recognized in the scandal over ex-Cardinal Theodore McCarrick, the former archbishop of Washington. Even though the Vatican knew for years he slept with his seminarians, McCarrick was only put on trial after someone came forward saying McCarrick had abused him as a youth. Francis eventually defrocked McCarrick in 2019.

According the new law, priests who engage in sexual acts with anyone — not just a minor or someone who lacks the use of reason — can be defrocked if they used “force, threats or abuse of his authority” to engage in sexual acts. Previously the Vatican only considered it a crime if the priest used force or threats, and lumped the provision alongside sexual abuse of a minor.

Monsignor Juan Ignacio Arrieta, secretary of the Vatican’s legal office, said the new version would cover any rank-and-file member of the church who is a victim of a priest who abused his authority.

That provision is contained in a section detailing violations of the priest’s obligation to remain celibate. Another section of the law concerns priestly crimes against the dignity of others, including sexual abuse of minors and vulnerable adults.

The law doesn’t explicitly define which adults are covered, saying only an adult who “habitually has an imperfect use of reason” or for “whom the law recognizes equal protection.” Arrieta said the Vatican chose not to define precisely who is covered but noted that the Vatican previously defined vulnerable adults as those who even occasionally are unable to understand or consent because of an physical or mental deficiency or are deprived of their personal liberty.

The Rev. Davide Cito, a canon lawyer at the Pontifical Holy Cross University, said the broadness of the law “allows it to protect many people” who might not necessarily fall under the strict definition of “vulnerable” but are nevertheless deserving of protection.

In a novelty aimed at addressing sex crimes committed by laypeople who hold church offices, such as the founders of lay religious movements or even parish accountants and administrators, the new law says laypeople can be punished if they abuse their authority to engage in sexual or financial crimes.

Since these laypeople can’t be defrocked, penalties include losing their jobs, paying fines or being removed from their communities.

But Kurt Martens, a canon lawyer and professor at Catholic University of America, wondered how the church would enforce the payment of fines, suggesting the penalty might be an example of “wishful thinking” on the Vatican’s part.

“You can have the most perfect legislation and the lousiest enforcement,” Martens said in a phone interview. “Unlike civil authorities, what is the power of the church to enforce penalties she ultimately chooses to enforce?”

The need for such a lay-focused provision was made clear in the scandal involving Luis Figari, the lay founder of the Peru-based Sodalitium Christianae Vitae, a conservative movement that has 20,000 members and chapters throughout South America and the U.S.

An independent investigation concluded Figari was a paranoid narcissist obsessed with sex and watching his underlings endure pain and humiliation. But the Vatican and local church dithered for years on how to sanction him since he wasn’t a priest and couldn’t be defrocked – the worst penalty foreseen for sexual abusers.

Ultimately the Vatican decided to remove him from Peru and isolate him from the community.