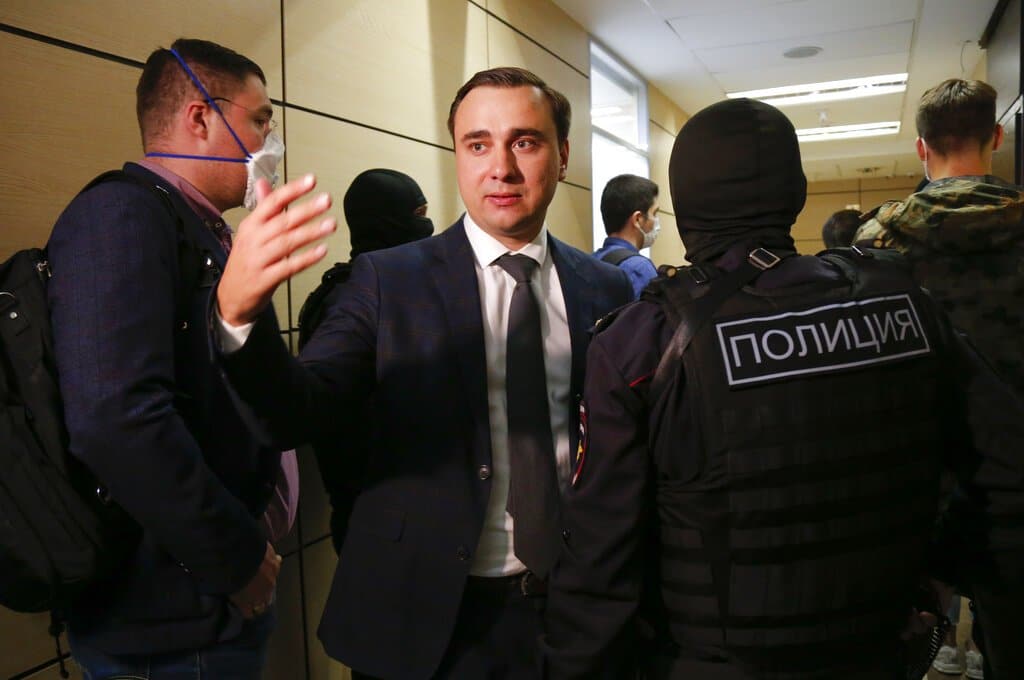 Imprisoned Russian opposition leader Alexei Navalny had his anti-corruption group Foundation for Fighting Corruption hit by a court injunction on Monday. The order suspends the organization’s offices from conducting activity. The Associated Press has the story:

MOSCOW (AP) — A Moscow court on Tuesday restricted the activities of an organization founded by imprisoned opposition leader Alexei Navalny, pending a decision on whether it and his offices across Russia should be outlawed as extremist groups.

The ruling on the Foundation for Fighting Corruption by the Moscow City Court was another step in the sweeping crackdown on Navalny, his allies and his political infrastructure.

The Moscow prosecutor’s office had petitioned the court to label the foundation and Navalny’s network of regional offices as extremist groups and effectively outlaw their activities. Such a move would expose members and supporters to lengthy prison terms.

If the court grants the request, it would be a crippling blow to the beleaguered team of Navalny, who is President Vladimir Putin’s most prominent critic. Navalny has been behind bars since January, and many of his aides and associates were arrested or face criminal charges.

On Monday, the prosecutor’s office issued an injunction ordering Navalny’s offices in dozens of Russian regions to suspend their activities, after which they effectively shut down. Tuesday’s court ruling on the foundation barred it from performing certain activities, and Navalny’s allies argued it wouldn’t affect the foundation’s work.

The foundation cannot use the internet, distribute content or organize rallies

Ivan Pavlov, a lawyer for the foundation, said it is no longer allowed to use the media or the internet to distribute content or to organize rallies and public events, participate in elections or use bank deposits.

Such restrictions won’t disrupt the foundation’s work, said director Ivan Zhdanov, arguing that most of the restrictions don’t apply to the anti-corruption organization’s activities.

“Some nonsense,” Zhdanov tweeted. “(These) aren’t going to influence our work in any way.”

Still, Pavlov said he will appeal the court’s decision to impose the restrictions.

“It seems to me that the court hastily considered and sustained this motion of the prosecutor’s office,” Pavlov told The Associated Press, referring to the motion that was filed Monday.

Navalny’s foundation started 10 years ago and has alleged high-ranking government officials are corrupt by posting colorful and widely watched videos on social media platforms such as YouTube.

One of its latest posts, which has received 116 million views, alleges that a lavish palace on the Black Sea shore was built for Putin through an elaborate corruption scheme. The Kremlin has denied there are any links to Putin.

Along with the foundation, Navalny set up a network of regional offices in dozens of regions when he was campaigning to run against Putin in the 2018 presidential election. He eventually was barred from running but kept the infrastructure in place.

The regional sites began their own investigations of graft by local officials and recruited activists, some of whom later ran for public office themselves. The locations also were instrumental in organizing nationwide rallies in support of Navalny this year.

Navalny was arrested in January upon returning from Germany, where he spent five months recovering from a nerve agent poisoning that he blames on the Kremlin — accusations that Russian officials reject.

His arrest triggered protests across Russia that proved to be the biggest show of defiance in years. But they didn’t stop authorities from putting Navalny on trial for violating the terms of a suspended sentence while he was in Germany. The sentence stemmed from a 2014 embezzlement conviction that Navalny has characterized as politically motivated. He was ordered to serve 2½ years in prison and last month was transferred to a penal colony notorious for its harsh conditions.

Navalny said he developed severe back pain and numbness in his limbs and began a hunger strike in order to get authorities to have his doctor see him at the penal colony. Instead, they moved him to another prison with a hospital ward. According to his physicians, his health had deteriorated significantly after he refused food for more than three weeks. He ended the fast after undergoing tests and examinations in a civilian hospital and getting a warning from his doctors that his life was at risk.

In an emotional message posted to his Instagram account Tuesday, Navalny thanked all the medical workers he has encountered in the past year — from those who treated him after the poisoning to nurses in the prison hospital. “After all, I understand they’re (acting) within limits imposed by their superiors, and in turn by the Kremlin. But I am seeing now that people are genuinely trying to help,” he said.

The foundation and the regional offices have been targeted regularly with raids, fines and detentions of activists before, but Navalny’s allies say the extremism petition takes the pressure to a new level.

It remains unclear what evidence the prosecutor’s office has against Navalny’s organizations because all court proceedings are taking place behind closed doors, and some of the case files have been classified as secret.

The defense team has been reviewing the files since Monday, and Pavlov told the AP they have not yet figured out exactly what implicates Navalny’s groups.

“So far (the authorities) have been trying to impress us with the quantity and not the quality of the evidence the prosecutor’s office uses to substantiate its demand to liquidate and ban the activities of these organizations,” he said.

Authorities in Moscow, meanwhile, continued their clampdown on people in connection with the April 21 demonstration in support of Navalny. Police didn’t interfere with thousands of protesters who marched in the central streets of the capital, but they arrested people in the days that followed instead.

Sergei Davidis, member of the Memorial human rights group, was ordered jailed for 10 days by a Moscow court on Tuesday for retweeting a post ahead of the protest. Davidis was detained Sunday.

Police also briefly detained two reporters who covered the Moscow protest who had to give statements about their work. Officers visited two other journalists to discuss what they did at the rally.

“Previously the protesters’ main risk was being beaten and arbitrarily detained by police at a rally,” said Natalia Zviagina, Amnesty International’s Moscow office director. “As of now, avoiding this fate does not mean that you can feel safe -– the repressive state knows who you are and can come for you at any point.”

She added that “the risk of attempting to exercise your right to freedom of peaceful assembly has never been so high in Russia.”