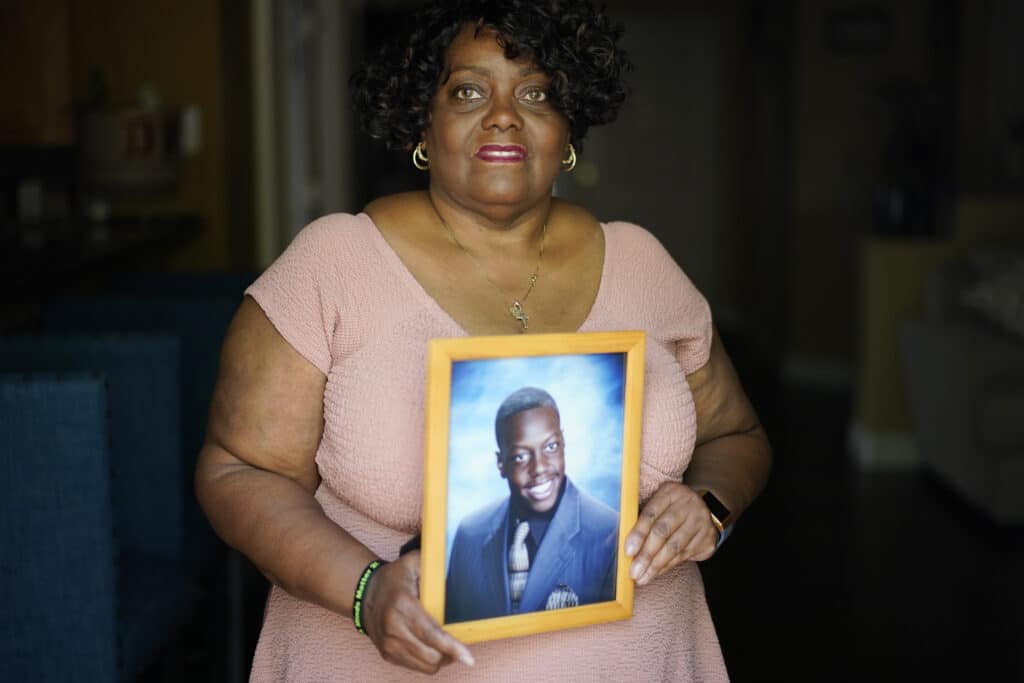 Prosecutors finally filed charges against Danville Police Officer Andrew Hall last month for fatally shooting an unarmed mentally ill man in 2018. Before they were filed, however, he fatally shot Tyrell Wilson, a black man, in March. The Associated Press has the story:

DANVILLE, Calif. (AP) — Two fatal shootings by the same police officer in a wealthy San Francisco suburb have cast a spotlight on what criminal justice activists are calling a case of delayed justice and its deadly consequences.

The April 21 announcement of charges came more than two years after the shooting of Laudemer Arboleda, and one day after a jury convicted Minneapolis police Officer Derek Chauvin of killing George Floyd.

It also came six weeks too late for Tyrell Wilson, who was shot and killed by Hall in March.

“Why did it take so long for the DA to file charges?” asked Wilson’s mother, Diane. Just a few weeks sooner, Hall would have been off the streets and, she said: “Tyrell would still be here with us now.”

Danville is a town of multimillion-dollar homes that tops lists of the safest places to live in California. Many of the questions residents are now posing echo those America is asking of policing nationwide. Was the officer’s use of deadly force justified or excessive?

Was the officer held accountable? And did racism play a role when Hall, who is white, shot nine bullets into Arboleda, an unarmed Filipino man, in 2018, or when he fired a single shot to the head of Wilson, a Black homeless man?

Wilson’s March 11 shooting occurred after police received calls about someone throwing rocks off a freeway overpass.

When Hall arrived, he confronted Wilson, who was crossing a nearby intersection. It remains unclear if Wilson was the person throwing rocks, but Hall assumed he was.

Wilson turned to face Hall in the middle of the intersection and is seen on video holding a knife.

“Touch me and see what’s up,” Wilson responded, verbally challenging Hall but never lunging at him.

Hall ordered him three times to drop the knife and then fired, a single shot to Wilson’s face. Just 32 seconds elapsed from the moment Hall first spoke to Wilson to the moment he fired.

The Associated Press reconstructed the encounters through police video footage, interviews and documents obtained through public record requests. The Danville police chief, the Contra Costa County sheriff, the county’s district attorney and Hall’s lawyer declined to be interviewed for this story.

Related: Gun violence: Disarming could be the solution

Civil rights attorney John Burris is representing both families and lobbying the California attorney general and U.S. Department of Justice to examine the shootings to see if they show a pattern of misconduct and racism by Hall.

“All I know is a Black man and a Filipino man were both killed in a town that is predominantly white,” said Burris. The two are the only police shootings in Danville in at least a decade. “This man should be prosecuted, and like Chauvin, he should be in handcuffs for what he did.”

In both cases, police were responding to routine calls that escalated quickly when Hall arrived, said Burris. For Wilson, it was not established he had thrown rocks, and there were no reports of injuries or accidents from the rocks.

“How do you go from reasonable suspicion to murder?” asked Burris. “It’s an outrageous shooting, he did not have to kill this man.”

In Arboleda’s case, police responded on Nov. 3, 2018, to a call about a “suspicious” person knocking on doors. Arboleda was ringing doorbells and “lingering in the area,” the district attorney said in a statement.

Arboleda was driving away when officers tried to initiate a traffic stop. Like Wilson, he tried to avoid police.

Arboleda led officers on a nine-minute, slow-speed chase. Hall was not involved in the initial pursuit but stopped his vehicle at an intersection to block Arboleda’s car.

Police video footage shows Hall stepping in the path of Arboleda’s car and firing a volley of shots into the windshield and passenger side window. Nine bullets hit Arboleda.

The sheriff’s office cleared Hall after a nine-month investigation.

It was not the first time Hall was investigated and exonerated by the sheriff’s office. In 2014, Hall was accused of “brutally attacking” an inmate at a county jail in the city of Martinez. The inmate, identified as a 6-foot-3 Black man, said Hall rammed him face-first into a door while he was handcuffed and repeatedly punched him in the face and side. The inmate was treated for a fractured eye socket and needed stitches in his lip. A probe by the sheriff’s office found no evidence of unreasonable force.

Mental illness plagued both men who were killed

District Attorney Diana Becton said in a statement accompanying the April 21 indictment that Hall used “unreasonable and unnecessary force” against Arboleda and his actions underscore the need to improve de-escalation training and response to people suffering mental illness. Hall was charged with voluntary manslaughter and assault with a semiautomatic firearm.

Nobody knows exactly why Arboleda or Wilson ended up in Danville. But in both cases, their families say, mental illness played a role.

Arboleda was living at his mother’s apartment in Newark, about an hour’s drive from Danville, and wanted more independence. His family believes that’s why he went to Danville, ringing doorbells and searching for the property manager of his mother’s condominium, who lived there.

A few months earlier, Arboleda was hospitalized for psychiatric reasons, and his mother, Jeannie Atienza, said he feared police would take him back to the hospital.

“He was afraid of police. I know that he was just trying to get away,” said his mother, who disputes police accounts that her son was trying to ram his car into Hall.

In the months before Wilson’s death, his family knew he was homeless and had been prescribed medication for depression or paranoia, they think, which he didn’t like taking. They believe he chose Danville because it reminded him of the quiet, middle-class suburb where he grew up in Riverside, Orange County.