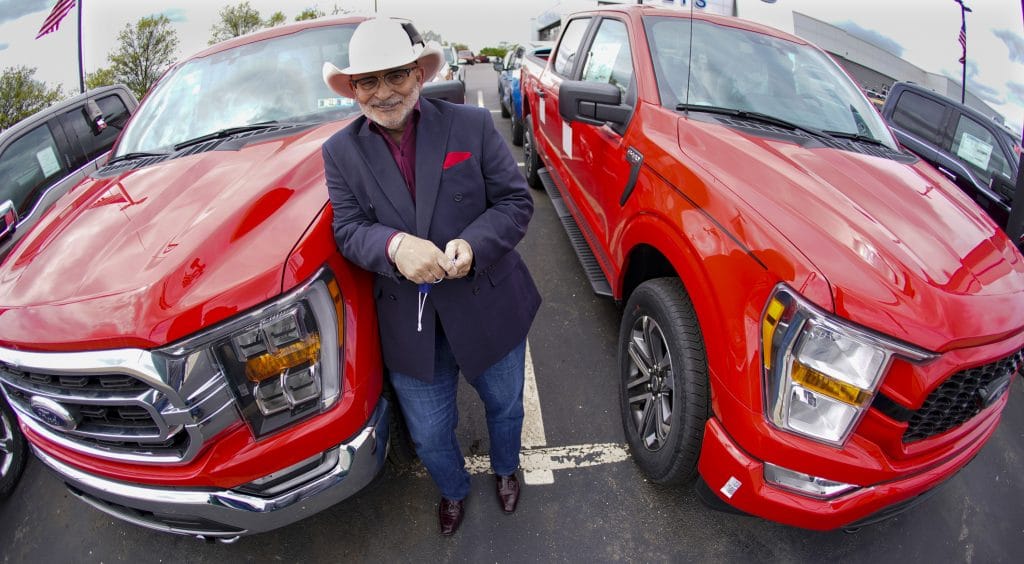 A global shortage of computer chips has cut production of cars, resulting in fewer cars for sale at a time when consumers are just starting to get back in the market post-pandemic for items like cars. Ford is only manufacturing half the number of vehicles it would normally between now and June. The Associated Press has the story:

DETROIT (AP) — For the next few months, Charlie Gilchrist figures his 11 car dealerships in the Dallas-Fort Worth area will sell just about every new vehicle they can get from the factories — and at increased prices.

In normal times, that would be cause for joy. Not so much now. A global shortage of computer chips has forced automakers to slash production. The result has been far fewer vehicles on dealer lots, just as the waning pandemic has fueled a pent-up consumer demand for cars, trucks and SUVs.

Given the robust customer demand, dealers like Gilchrist could sell many more cars and trucks, if only they had more. Even at elevated prices — the average new-vehicle sales price tops $40,000, up nearly 10% in two years — customer demand exceeds supply.

“It’s pretty evident when you pull onto our lots that there’s not much selection,” said Gilchrist, whose lots carry brands ranging from General Motors and Ford to Nissan and Volkswagen. “Our (sales) volume is falling because of the sheer lack of inventory. It will still fall during the next two or three months.”

The across-the-board surge in auto prices contributed mightily to last month’s jump in U.S. consumer prices, the government reported Wednesday. A record 10% increase in used vehicle prices, in fact, accounted for roughly one-third of April’s overall rise in consumer prices — the sharpest monthly increase in more than a decade.

Ford expects to produce only half its normal number of vehicles from now through June. GM and others have resorted to halting production of some cars and smaller SUVs and diverting computer chips to higher-profit pickup trucks and large SUVs. Leading automakers are warning of diminished earnings.

The vehicle scarcity and the soaring prices can be traced to the eruption of the coronavirus 14 months ago. As the virus spread, auto factories shut down for a couple of months. With millions more people working from home, demand for laptops and monitors led semiconductor makers to shift from autos to personal electronics. Soon, though, a faster-than-expected economic rebound boosted demand for vehicles, and auto plants tried to restore full-scale production. Yet chip makers couldn’t respond swiftly enough.

Analysts foresee no return to normal before next year

With production slowed, dealer inventories shrank. Now, as the chip shortage has persisted, the shortage of new vehicles has worsened, and analysts foresee no return to normal before next year.

Yet so far, automakers have been earning big profits even with a depleted inventory, largely because many buyers have been willing to pay more to get what they want. With government stimulus checks and tax refunds in hand, Americans bought about 1.5 million new vehicles in April. That’s an adjusted annual sales rate of 18.5 million — the highest such rate since 2005.

“It’s like toilet paper was a year ago,” said Michelle Krebs, executive analyst for Cox Automotive. “Everyone is rushing to buy a car.”

Related: Automakers Embrace Electric Vehicles; But What About Consumers?

Cox Automotive surveys suggest that 63% of potential buyers will stay in the market even with higher prices and a meager selection of vehicles. With new vehicles prices jumping, the cost of popular vehicles has become eye-opening. The average price of a new Chevrolet Silverado pickup, for example, is now just under $51,000.

Even so, the supply of vehicles is dwindling. Last month, the nation’s total new-vehicle inventory plummeted 42% from a year ago to 1.9 million. That’s enough to supply only 33 days of sales at the current pace — 88 days fewer than a year ago, according to Cox. At the same time, discounts fell 5% from March to April and 25% from a year ago to an average of $3,239 per vehicle.

Jeremy Smith is seeing the price increases on both ends as he buys and sells pickup trucks for his utility trailer sales business near Buffalo, New York. In March, he bought a used diesel 2020 Chevy Silverado crew cab with 21,000 miles on for $61,000. Comparable trucks are now listed on websites, he said, for $68,000 to $70,000.

“You sell high, you buy high,” said Smith, who frequently buys trucks for his business. To get one now, he says, people have to move quickly to put in bids with dealers or owners.

Analysts recommend waiting to buy a vehicle until next year

Given the lack of supply, nearly everyone expects new vehicle sales to fall soon. That would mean fewer trade-ins, which would further tighten a low supply of used vehicles. For consumers who can wait, analysts say, it might be wise to delay buying any vehicle until next year or even beyond.

Dealers mark up wholesale prices when they sell to consumers. The average list price of a used car last month was just over $22,000, 14% higher than a year ago.

Dealers are now scrambling for used cars, hoping to sell them to keep cash flowing through the summer as new vehicle supplies dry up. Richard Bazzy, who runs four Ford and Lincoln dealerships in suburban Pittsburgh, said he’s formed a team to buy used vehicles.

“Every car dealer in the world is jamming the auctions right now trying to fill their shelves because of the lack of new-car inventory,” he said.

Bazzy said he’s hopeful that his business will manage OK with used sales, as well as revenue from parts and service. But he wants all the used cars they acquire now to be sold by August, when he expects the inventory of vehicles to start a return to normal.

The pandemic and chip shortage have made rental cars scarcer, too, driving up prices dramatically and causing long waits as people start traveling again. Rental companies have had trouble getting new cars because auto companies have diverted vehicles away from fleet buyers to more profitable sales to consumers. Higher demand has sent some rental companies to the used car market to find vehicles.

Whenever the car shortage ends, GM, Ford and others say they will change business models away from having huge stocks. GM has considered regional distribution centers that could send vehicles to dealers in a matter of days. Ford’s CEO Jim Farley has talked of quickly delivering on factory orders. Both companies hope to reduce the interest paid on high inventories and keep discounts low.

“I do think we are on the verge of possibly a different kind of paradigm for how vehicles are distributed,” Krebs said.

Still, competition could thwart those plans once factories return to normal production.

Bazzy normally stocks 400-500 pickup trucks at his three Ford dealers but is down to around 100. He’s confident that he can keep customers happy if they order a truck and can get it in four weeks. But he fears losing business to competing brands with a huge stock.

“If the guy across the street from me has 300 (trucks) and my guy has to wait four weeks,” Bazzy said, “I’m going to lose him.”