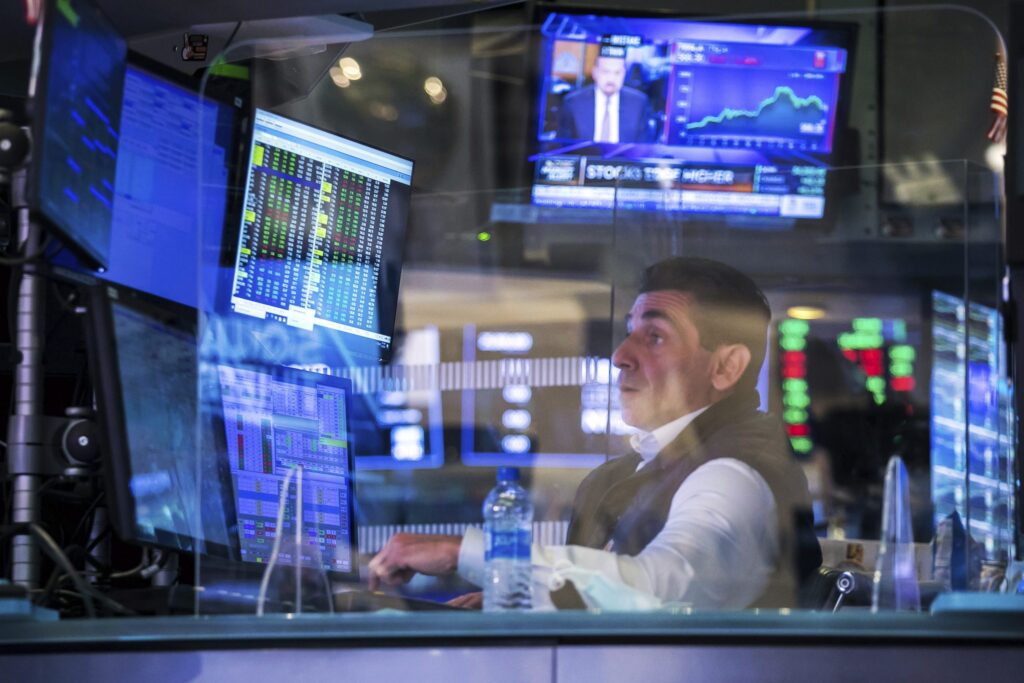 A late-afternoon sellout of tech stocks left stock indexes in the red Tuesday. Banks, industrial and communication companies also dragged the market down. The Associated Press has the story:

The S&P 500 lost 0.9%, with most of the pullback coming in the last hour of trading. Apple, Facebook and Google’s parent company all lost 1% or more as technology stocks fell broadly. While they powered the market rebound last year, tech stocks are up only 2.6% this year, the lowest gain among the S&P 500’s 11 sectors.

Investors continued to size up the latest batch of company earnings reports, including quarterly snapshots from Walmart and Home Depot.

Wall Street is also weighing the possibility of more inflation later this year and economic recovery as the coronavirus pandemic eases. That balancing act has contributed to a market pullback this month.

“Stocks appear to be in consolidation mode, digesting strong year-to-date gains on the heels of a superb first-quarter reporting period,” said Terry Sandven, chief equity strategist at U.S. Bank Wealth Management. “We view this pullback that we’re experiencing over the last week or so as within the normal ebb and flow of a broad market that still has legs to trend higher.”

The broader market made solid gains early in the year as investors bet on an economic recovery fueled by widespread vaccinations. Expectations were high for corporate earnings and the latest round of results has been surprisingly good. Wall Street is now digesting that growth and shifting to a more cautious view.

Investors have been worried about whether rising inflation will prove to be either temporary or whether it will endure. Prices are rising for everything from gasoline to food as the economy recovers from its more than year-long malaise.

The fear is that the Federal Reserve will have to dial back the extensive support if inflation persists. That includes record-low interest rates and the monthly purchase of $120 billion in bonds meant to goose the job market and economy. For all the worries about inflation, many professional investors are echoing the Federal Reserve in saying that they expect rising prices to be “transitory.”

“I don’t think we’re entering a new period of structurally higher inflation, but at the same time its impossible to say it’s not one of the main risks investors face,” Mayfield said.

Higher interest rates drag on most of the stock market, but they are particularly painful for stocks considered the most expensive and those bid up for profits expected far into the future. This mostly involves technology stocks, which rose sharply last year and are valued highly on the future profits those companies could bring in.

Investors have been able to draw encouragement from company earnings reports, which have been surprisingly good.

“By most metrics you’re seeing company financials reflect an economy that’s starting to open up and that’s consistent with economic growth,” Sandven said.

Retailers are among the last companies to report first-quarter results, with several of them set to do so this week, including Target and Lowe’s.

On Tuesday, Walmart rose 2.2% after the giant retailer’s results beat estimates as online shopping saw significant growth from a year ago, driven in part by Americans buying online in the pandemic.

AT&T fell 5.8% for the biggest decline in the S&P 500 and continued a two-day slide after the company announced it would spin off its Warner media assets into a new company with Discovery Communications. AT&T only finished acquiring Warner, which includes HBO, CNN, DC Comics and other iconic properties, in 2018 and its new CEO is pulling an about-face on his predecessor’s decisions.