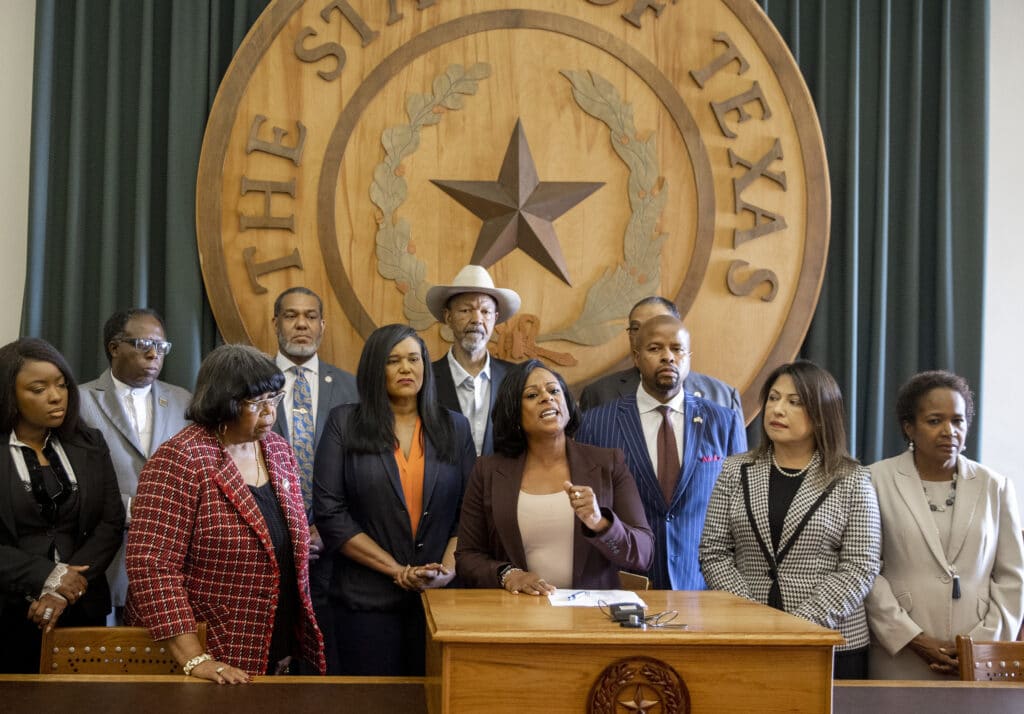 Democrats in the Texas legislature walked out before a deadline to vote on a bill proposed by Republicans aimed at voter fraud. Democrats say the bill was discriminatory. The Associated Press has the story:

AUSTIN, Texas (AP) — Texas Democrats pulled off a dramatic, last-ditch walkout in the state House of Representatives on Sunday night to block passage of one of the most restrictive voting bills in the U.S., leaving Republicans with no choice but to abandon a midnight deadline and declare the legislative session essentially over.

The revolt is one of Democrats’ biggest protests to date against GOP efforts nationwide to impose stricter election laws, and they used the spotlight to urge President Joe Biden to act on voting rights.

But the victory may be fleeting: Republican Gov. Greg Abbott, who had declared new voting laws a priority in Texas, quickly announced he would order a special session to finish the job. He called the failure of the bill “deeply disappointing” but did not say when he would drag lawmakers back to work.

“We’ve said for so many years that we want more people to participate in our democracy. And it just seems that’s not the case,” Democratic state Rep. Carl Sherman said.

One by one, Democrats left the House chamber until there was no longer the 100-member quorum needed to pass Senate Bill 7, which would have reduced polling hours, empowered poll watchers and scaled back ways to vote in Texas, which already has some of the nation’s strictest voting laws.

They gathered later outside a Black church, driving home their anger over a last-minute change to the Texas bill that would have prohibited Sunday voting before 1 p.m., when many Black worshippers go to the polls. Democrats said they did not go into the House vote intending to break quorum, but instead became fed-up after Republicans repeatedly refused to take their questions while racing to pass the bill.

It was a stunning turnabout from just 24 hours earlier, when the bill seemed all but guaranteed to reach Abbott’s desk. The Texas Senate had signed off before sunrise earlier Sunday after Republicans, who hold an 18-13 majority in the chamber, used a bare-knuckle procedural move to suspend the rules and take up the measure in the middle of the night.

But as the day wore on in the House, the GOP’s chances wobbled. State Rep. Chris Turner, the Democratic House leader, said he sent a text message to members of his caucus at 10:35 p.m. telling them to leave the chamber. But by that point, the exodus was already well underway.

“We knew today, with the eyes of the nation watching actions in Austin, that we needed to send a message, and that message is very, very clear: Mr. President, we need a national response to federal voting rights,” Democratic state Rep. Trey Martinez Fischer said.

Republicans showed restraint in criticizing Democrats for the move.

“I am disappointed that some members decided to break quorum,” said Republican state Rep. Briscoe Cain, who carried the bill in the House. “We all know what that meant. I understand why they were doing it, but we all took an oath to Texans that we would be here to do our jobs.”

Texas is the last big battleground in Republicans’ campaign to tighten voting laws, driven by former President Donald Trump’s false claims that the 2020 election was stolen from him. Georgia and Florida have also passed new voting restrictions, and Biden on Saturday had unfavorably compared Texas’ bill to election changes in those states as “an assault on democracy.”

Under revisions during closed-door negotiations, Republicans added language to the 67-page measure that could have made it easier for a judge to overturn an election. The bill would have also eliminated drive-thru voting and 24-hour polling centers, both of which Harris County introduced last year. Houston is in Harris County, the state’s largest Democratic stronghold.

Major corporations joined the backlash, including Texas-based American Airlines and Dell, warning that the efforts could harm democracy and the economic climate. But Republicans shrugged off their objections, and in some cases, ripped business leaders for speaking out. By the time the Texas bill was poised to pass over the Memorial Day weekend, the opposition from businesses had grown faint.

Since Trump’s defeat, at least 14 states have enacted more restrictive voting laws, according to the New York-based Brennan Center for Justice. It has counted nearly 400 bills filed this year nationwide that would restrict voting.

It was not the first time Texas Democrats — who have been out of power in the state Capitol for decades — have been able to block contentious legislation despite being outnumbered.

They twice broke quorum in 2003 to stop Republican efforts to redraw voting maps, at one point leaving the state for Oklahoma. A decade later, former state Sen. Wendy Davis ran out the clock on a sweeping anti-abortion bill with a filibuster that lasted more than 11 hours, propelling her to a failed run for governor.

But in each instance, Republicans ultimately prevailed.

“We may have won the war tonight but the battle is not over,” Democratic state Rep. Nicole Collier said. “We will continue to fight and speak out against those measures that attempt to silence our voices.”