Trump increasingly appears to be running for president 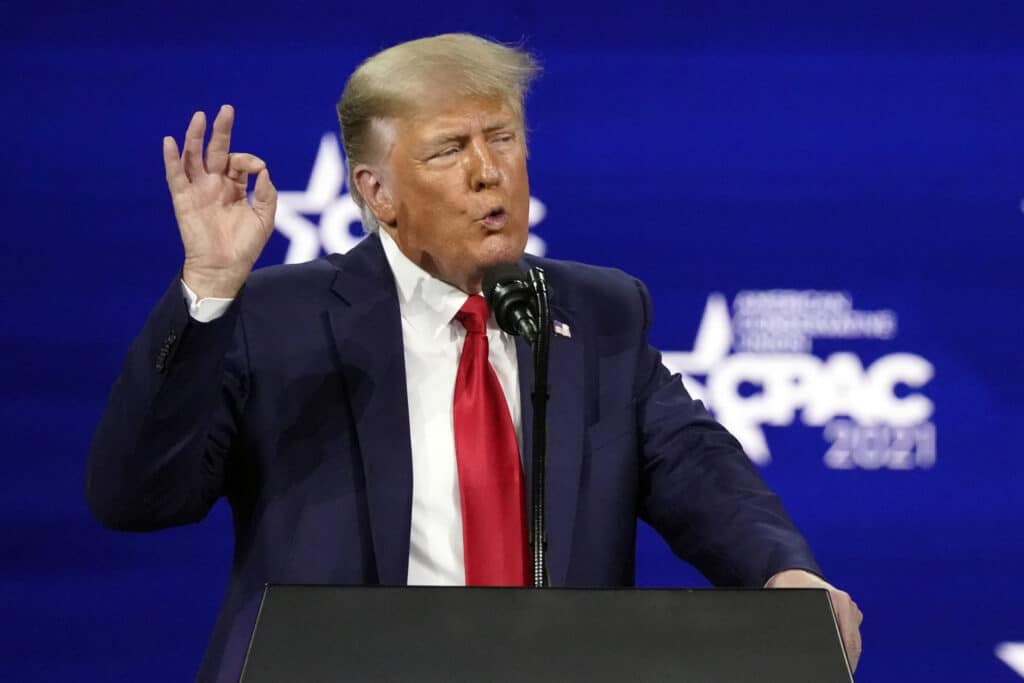 Former President Donald Trump has been making remarks that sound like he is considering running for president again, and people around him confirm it may be likely. However, at the same time, New York prosecutors have convened a special grand jury to consider evidence in their criminal investigation into his business dealings. The Associated Press has the story:

Hints piling up that Donald Trump is considering a 2024 run

WASHINGTON (AP) — Donald Trump was calling into yet another friendly radio show when he was asked, as he often is, whether he’s planning a comeback bid for the White House. “We need you,” conservative commentator Dan Bongino told the former president.

“Well, I’ll tell you what,” Trump responded. “We are going to make you very happy, and we’re going to do what’s right.”

It was a noncommittal answer typical of a former president who spent decades toying with presidential runs. But multiple people who have spoken with Trump and his team in recent weeks say such remarks shouldn’t be viewed as idle chatter. Instead, they sense a shift, with Trump increasingly acting and talking like he plans to mount a run as he embarks on a more public phase of his post-presidency, beginning with a speech on Saturday in North Carolina.

The interest in another run, at least for now, comes as Trump has been consumed by efforts to undo last year’s election, advancing baseless falsehoods that it was stolen and obsessing over recounts and audits that he is convinced could overturn the results, even though numerous recounts have validated his loss. He’s also facing the most serious legal threat of his career.

New York prosecutors have convened a special grand jury to consider evidence in their criminal investigation into his business dealings — seen by many as a sign that Manhattan District Attorney Cyrus Vance Jr. is moving toward seeking charges in the two-year, wide-ranging investigation that has included scrutiny of hush money payments, property valuations and employee compensation.

Trump has slammed the probe as “purely political,” and those around him insist he isn’t concerned about potential legal exposure even as they suggest his political posture is evolving.

Matt Schlapp: More likely than not

“I have definitely picked up a shift that there’s more of an intentionality to be leaning on the side of it’s going to happen than it’s not,” said Matt Schlapp, chair of the American Conservative Union, who is close to the former president. “I think it’s a very real possibility.”

Trump would face daunting headwinds in addition to his legal vulnerabilities. He would run with the legacy of being the only American president to be impeached twice. A campaign would almost certainly revive memories of the deadly insurrection he helped spark at the U.S. Capitol earlier this year, potentially dragging down other Republicans who have sought to move past the violence.

Beyond that, Trump would be 78 years old on Inauguration Day in 2025 — the same age as Democrat Joe Biden on his own Inauguration Day this year — and multiple Republicans are already making moves for runs of their own. Trump’s former vice president, Mike Pence, is slated to visit the early voting state of New Hampshire on Thursday.

Trump has long dangled the prospect of presidential campaigns to gin up media attention and stay part of the conversation. And many had initially brushed off Trump’s talk of another run as a tool to maintain relevance and his status as a GOP kingmaker. But there are tentative signs that he plans to follow through in more substantive ways to test his political strength, including by holding rallies this summer. His team is eyeing events in Ohio, Florida, Alabama and Georgia to bolster midterm candidates and energize voters.

Emboldened by the ouster of Liz Cheney

Allies say Trump misses the office and is eager to return to the action — especially as he sees other potential candidates making moves. He has also felt emboldened by some recent developments, including the ouster of one of his chief critics, Republican Rep. Liz Cheney, from her House leadership position. And some see the presidency as offering potentially useful legal shelter as probes into him and his family business intensify.

“There’s a continued, enduring interest and folks encouraging him to run in 2024, but he’s in no rush to make a decision. And he’ll do that at the appropriate time,” said Trump spokesperson Jason Miller.

There is doubt, however, among some in Trump’s orbit that he will move forward unless he sees a clear path to victory, for fear of being stained by another loss.

For now, Trump remains obsessed with the 2020 election. One longtime ally said one reason Trump has not said he’s running outright is because he has refused to acknowledge the election is over. The person said he’s now going a step further by giving credence to a bizarre conspiracy theory that he could somehow be reinstated into the presidency in August.

There’s no constitutional or legal mechanism for Trump to return to the presidency absent winning another election in 2024. Trump’s argument that the last election was tainted has been roundly rejected by federal and state officials, including his own attorney general and Republican election leaders. Judges, including those appointed by Trump, also dismissed his claims.

The person who described his thinking, like others, spoke on the condition of anonymity to discuss private conversations.

Florida Sen. Rick Scott, chairman of the National Republican Senatorial Committee, told The Associated Press on Thursday that he had not discussed the “August conspiracy” with Trump in their recent conversations.

As Trump advances such baseless conspiracy theories, Republican state legislators are pushing what experts say is an unprecedented number of bills aimed at restricting access to the ballot box that could affect future elections. While Republicans say the goal is to prevent voter fraud, Democrats contend the measures are aimed at undermining minority voting rights.

Trump remains a commanding force in the Republican Party, despite his loss. A recent Quinnipiac University national poll found that 66% of Republicans would like to see him run for reelection, though the same number of Americans overall said they would prefer he didn’t — and there is no evidence that he has grown any more popular since losing by more than 7 million votes last November.

Supporters in early-voting states are anticipating another Trump run, even as a long list of other would-be contenders, including former Secretary of State Mike Pompeo and Arkansas Sen. Tom Cotton, have been making visits.

“He’s definitely laying the groundwork, keeping his powder dry for a run,” Josh Whitehouse, a former member of the New Hampshire House of Representatives who worked for Trump’s campaign and administration, said of the former president. “I’d expect nothing less, knowing who he is and having worked for him for so long.”

While voters will certainly hear out other candidates, he said that, at the end of the day, support will coalesce around Trump if he decides to run.

“The energy’s still there,” Whitehouse said. “You can’t replicate it.”