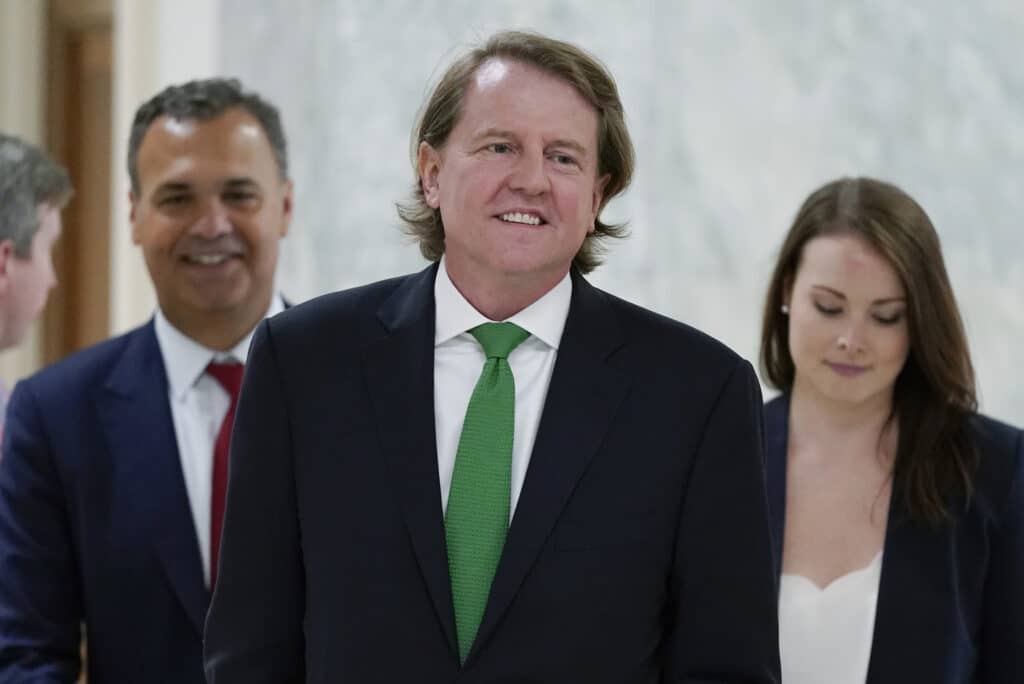 Behind closed doors, the House Judiciary Committee is interviewing a former attorney of Donald Trump who previously described Trump’s efforts to stifle a Justice Department investigation. The transcript with Don McGahn will be released within a week. The Associated Press has the story:

Key witness against Donald Trump, his former attorney, is testifying to Congress

The long-awaited interview is the result of an agreement reached last month in federal court, and a transcript will be publicly released within a week. House Democrats — then investigating whether Trump tried to obstruct the Justice Department’s probes into his presidential campaign’s ties to Russia — originally sued after McGahn defied an April 2019 subpoena on Trump’s orders.

That same month, the Justice Department released a redacted version of special counsel Robert Mueller’s report on the matter. In the report, Mueller pointedly did not exonerate Trump of obstruction of justice but also did not recommend prosecuting him, citing Justice Department policy against indicting a sitting president. Mueller’s report quoted extensively from interviews with McGahn, who described the Republican president’s efforts to stifle the investigation.

While the Judiciary panel eventually won its fight for McGahn’s testimony, the court agreement almost guarantees its members won’t learn much new. The two sides agreed that McGahn will be questioned privately and only about information attributed to him in publicly available portions of Mueller’s report.

Still, House Democrats kept the case going, even past Trump’s presidency, and are moving forward with the interview to make an example of the former White House counsel. House Judiciary Committee Chairman Jerrold Nadler, D-N.Y., said the agreement for McGahn’s testimony is a good-faith compromise that “satisfies our subpoena, protects the Committee’s constitutional duty to conduct oversight in the future, and safeguards sensitive executive branch prerogatives.”

Unclear what Democrats will do with the testimony

It is unclear what House Democrats will do with the testimony, which they sought before twice impeaching Trump. The Senate acquitted Trump of impeachment charges both times.

At a break during the interview, Nadler said McGahn’s appearance “vindicates the congressional subpoena right.”

As White House counsel, McGahn had an insider’s view of many of the episodes Mueller and his team examined for potential obstruction of justice during the Russia investigation. McGahn proved a pivotal — and damning — witness against Trump, with his name mentioned hundreds of times in the text of the Mueller report and its footnotes.

Related: Trump Increasingly Appears To Be Running For President

McGahn described to investigators the president’s repeated efforts to choke off the probe and directives he said he received from the president that unnerved him. He recounted how Trump had demanded that he contact then-Attorney General Jeff Sessions to order him to unrecuse himself from the Russia investigation.

He also said Trump had implored him to tell the deputy attorney general at the time, Rod Rosenstein, to remove Mueller from his position because of perceived conflicts of interest — and, after that episode was reported in the media, to publicly and falsely deny that demand had ever been made.

McGahn also described the circumstances leading up to Trump’s firing of James Comey as FBI director, including the president’s insistence on including in the termination letter the fact that Comey had reassured Trump that he was not personally under investigation.

And he was present for a critical conversation early in the Trump administration, when Sally Yates, just before she was fired as acting attorney general as a holdover Obama appointee, relayed concerns to McGahn about new national security adviser Michael Flynn. She raised the possibility that Flynn’s conversations with Russian Ambassador Sergey Kislyak — and his subsequent interview by the FBI — left him vulnerable to blackmail.