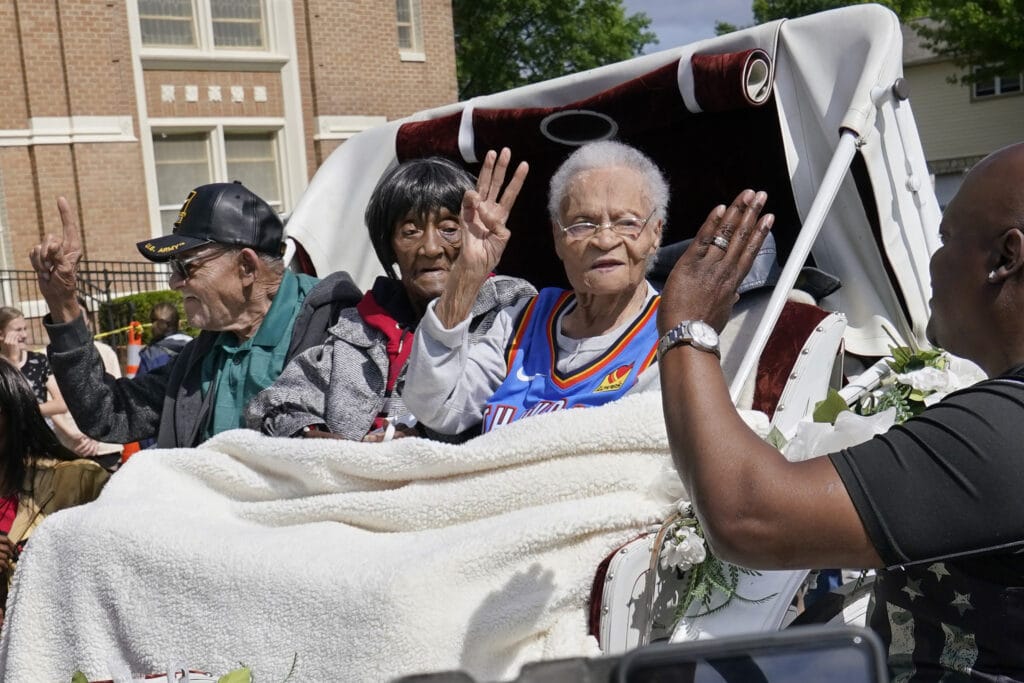 TULSA, Okla. (AP) — Joi McCondichie is a native of this city, but her life and career in public education kept her away from home for decades. When she returned to Tulsa from Los Angeles with her then-teenage son, she moved into a home just off of the Osage Prairie Trail on the city’s north side.

It was on this trail that thousands of Black Tulsans fled the white mob that leveled their community on May 31-June 1, 1921, in the calamity that came to be known as the Tulsa Race Massacre.

“I believe God led me here because he had a task for me,” McCondichie said.

McCondochie planned a march this weekend to memorialize those who ran from what is considered one of the worst and deadliest acts of racial violence in American history.

That march is just one of an array of events, culminating Tuesday with a visit by President Joe Biden, who is expected to join local leaders in marking the occasion.

The weekend was to include a keynote speech from former Georgia gubernatorial candidate and voting rights advocate Stacey Abrams and a performance by singer John Legend at Tulsa’s ONEOK Field in the historic Greenwood district. But organizers canceled the event on Thursday, citing “unexpected circumstances with entertainers and speakers.”

Representatives for Abrams and Legend did not respond to requests for comment.

Law enforcement organizations around the U.S. received a bulletin this week from the Department of Homeland Security warning of the potential for targeted violence at the commemoration of the Tulsa massacre, according to a federal law enforcement official.

The official, speaking on condition of anonymity to discuss a bulletin that was not publicly released, said authorities don’t have credible intelligence about any specific plot to target the Tulsa events. But the alert was issued given the nature of the commemoration and the “volatile threat environment.”

McCondochie said her late grandmother, Eldoris McCondochie, was among the survivors in 1921 who streaming out of Greenwood, also known as Black Wall Street, the bustling city within a city that was the picture of Black wealth and entrepreneurial success.

On Tuesday morning, Joi McCondichie’s “A Century Walk” will retrace Greenwood residents’ escape. The walk will start along a 1.5 mile stretch of abandoned railroad tracks near Greenwood and Archer avenues. And then the walkers will move north onto Osage Prairie Trail until they reach 56th Street, between Peoria Avenue and Martin Luther King, Jr. Boulevard, where a community celebration awaits.

“I thought this would be a beautiful way to commemorate the ancestors by having or attempting to walk a mile in their shoes,” Joi McCondichie said.

“They’ll lead us into what we feel will be a very powerful, powerful weekend to show deference and honor to the lives that were lost and the descendants and survivors who were still living,” Crutcher said.

Other commemoration programs include a Greenwood Art Project art installation and the dedication of a prayer wall at Vernon AME Church, one of the few Greenwood structures that survived the massacre.

Following the official massacre commemorations, on Wednesday, the 1921 Tulsa Race Massacre Centennial Commission will open Greenwood Rising, a $30 million history center and museum. The commission says it honors the legacy of Black Wall Street with exhibits depicting the Greenwood district before and after the massacre.

“When you go into Greenwood Rising, we will actually have railroad tracks that you walk across” to remember that Black and white Tulsa used to be divided by railroad tracks, said state Sen. Kevin Matthews, who chairs the massacre centennial commission. The history center is located in his legislative district, at Greenwood and Archer avenues.

Republican Mayor G.T. Bynum, who is white, said the weekend’s events are critical to a reconciliation process sorely needed in the city.

“I think the greatest mistake that could come out of this centennial commemoration is if people look at it and think, ‘Well, that’s just something that happened a hundred years ago,’ and not think about how it relates to America today,” Bynum said. Read more U.S. news