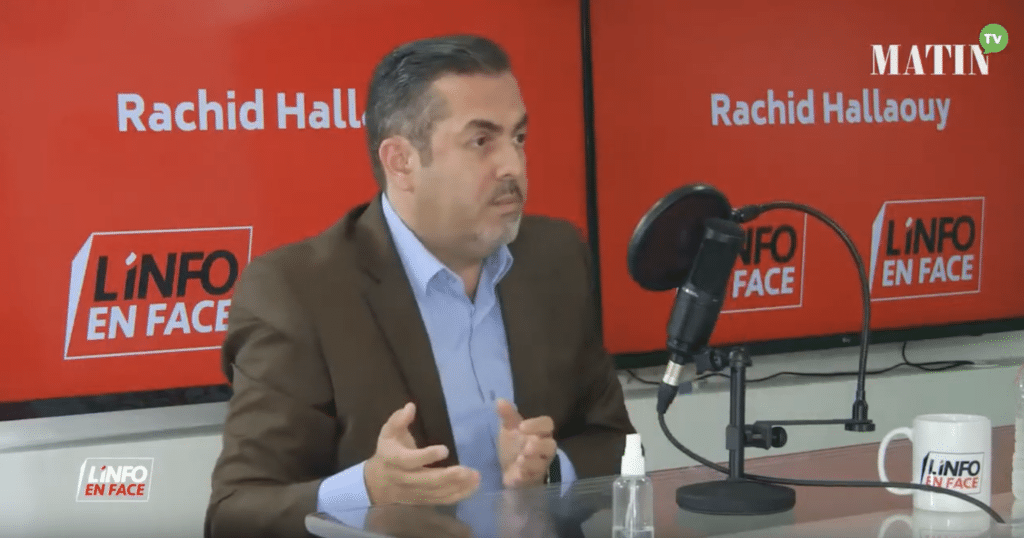 In a lengthy press interview with the Moroccan newspaper Le Matin, the Moroccan writer and political analyst Mr. Omar Dahbi confirmed that the future of Moroccan-Spanish relations depends on the extent of Madrid’s willingness to show sobriety and reason and its willingness to sit with Morocco and think about the common interests that unite the two neighboring countries.

The political analyst held the Madrid government responsible for the deterioration of Moroccan-Spanish relations due to its provocative actions and its limited view of the interests of its people and its neighbors. آNewslooks brings you the story as published by Maghreb Arab News Agency, and the interview in French, as broadcast by the Moroccan newspaper, Le Matin. (Viewers who do not speak French can also enable simultaneous interpretation by YouTube)

Rabat – MAP – The hosting by the government of Madrid of the leader of the polisario separatist militias, the man named Brahim Ghali, under a false identity, constitutes a “serious violation” of Spanish law, said political analyst Omar Dahbi, stressing that this attitude has “discredited Spain before the European authorities”.

“An Executive who has agreed to bypass the judicial power of his own country by welcoming on its territory an individual wanted by this same power with a false identity is capable of anything”, explained Dahbi, who was the guest of the “L’info en face” aired by the “Matin TV” channel.

“Morocco felt stabbed in the back,” said Dahbi, author of several books including “Morocco-Spain: War of Shadows”.

In this sense, he indicated that the case of the man named Brahim Ghali discredits before the European authorities the Spanish government which wants to divert attention from this case and attract more European solidarity on the recent events in Sebta.

Dahbi stressed that the use of the same process for enabling the leader of the separatists to leave the Spanish territory will have serious consequences on relations between Morocco and Spain.

In this context, he noted that the “humanitarian reasons” given by Madrid for the hosting and hospitalization of the leader of the separatists cannot stand before the law.

In Dahbi’s opinion, this is a “serious breach” on the part of the Spanish Executive in its duty towards its own country and also towards the Spanish victims of this individual, adding that Spain committed “a serious error” against a partner who has been working for years for the development of its relations with the Iberian neighbor in all its aspects.

He considered that there is “no parallel” between the case of the man named Brahim Ghali and the recent events of the migrants in Sebta because these are two totally different cases.

The political analyst indicated that the Spanish party excels in the art of diverting attention from one main matter to another secondary or subsidiary one, just as its media also excel in fabricating an erroneous image of Morocco which serves its interests.

Stressing that the Moroccan diplomacy is based on several values ​​and principles, Dahbi noted that the Kingdom fights against cross-border organized crime out of conviction and out of duty towards the international community.

“When Morocco also exchanges information on terrorist affairs with other countries to spare them attacks, it does so because it firmly believes that it is a value to fight against this scourge ( …). When the Kingdom fights against illegal immigration, it does so because it has set it as a philosophy and a doctrine,” he said.

Recalling that the Spaniards have not yet grasped the extent of the change that the northern region has experienced, he emphasized the opportunities created by Morocco to establish itself as a true haven of peace, prosperity and development, able to allow Europe to have an important gateway to Africa.

In this regard, he noted the absence of a clear long-term vision at the level of power in Spain vis-à-vis its southern neighbors, especially Morocco, noting that the Spaniards are positioning themselves in an attitude of short term and suffer from the lack of real governmental cohesion and real Spanish statesmen in decision-making.

Referring to the Moroccan Sahara issue, Dahbi, who indicated that geopolitics has changed globally, argued that “the utopian dream of the separatists and their Algerian mentor will never come true.”

He underlined the global development, prosperity and progress on a continental scale experienced by the southern provinces of the Kingdom against an obsolete discourse by the separatists who have held as hostage, for years, a large population in the Tindouf camps.

Dahbi, who asserted that the Moroccan Sahara issue remains the cause of an entire people, said Spain should show “state intelligence at the highest level” and build new relationships with the South.

He deplored that the Spaniards do not have the necessary will and lack “geopolitical intelligence”, noting that Spain needs today to have good relations with Morocco, two countries which are in such a close neighborhood and in a region threatened by all forms of crime (terrorism, drug trafficking, human trafficking, etc.).

“There is unfortunately amateurism and levity in the attitude of the government in Spain. A self-respecting state speaks out in front of its public opinion to explain what really happened in a clear way, and shoulders its responsibilities”, he said.

For Dahbi, Spain “should normally enter into an exchange with Morocco in order to first clarify the situation with all its details and jointly draw up an exit from the crisis. There is, moreover, no deal in the case of the man named Brahim Ghali because it is a case before the Spanish justice”.

“You have to have a serious exchange to establish a calendar to really talk about the future, cooperation and strategic alliance,” he said.

Dahbi further noted that the Spaniards should stop thinking by weighing two neighbors to the south. “Either they bet on the one who is winning the real battles and stands out as a serious ally who develops itself, has a project for the future, helps them, supports them and has always extended a hand to them with so much sacrifices made, or they turn to a state overwhelmed by local and regional geopolitics,” he noted.

He also considered that a way out of the crisis is highly desirable for the two friendly and allied countries at the service of their respective interests and peoples.

“There must be a political will and courage in Spain to move forward together and to be part of a dynamic of co-development,” he concluded. Read more international news