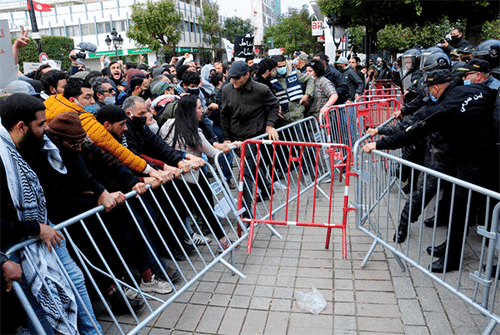 The USA has a long history of friendship with Tunisia going back to the US-Tunis Treaty of Friendship signed in 1797. The US was the first major state to recognize Tunisia after its independence in 1956. In Sidi Bou Said Tunisia is the North Africa American Cemetery from WWII when Allied lives were lost in the fight against the Axis.

The Birthplace of The Arab Spring

The Arab Spring started in Sidi Bouzid, Tunisia in late 2010, when a street vendor Mohammed Bouazizi set himself on fire. This sparked mass anti-government protests. Unable to control the crowds, President Zine El Abidine Ben Ali was forced to flee in January 2011 after 23 years in power.  Over 2011, Ben Ali’s downfall inspired similar uprisings across the Middle East. President Ben Ali and his administration were seen in the West as a model of democracy while internally rife with corruption and repression. The People of Tunisia had had enough.  The Tunisian Military had a major role in forcing Ben Ali out. Following the overthrow of Ben Ali, Tunisians elected a Constituent Assembly to draft a new constitution, and an interim government known as the Troika (a coalition of 3 parties). Efforts made by the Tunisian National Dialogue Quartet, assisted the Constituent Assembly to complete its work, the interim government resigned, and new elections were held in 2014, completing the transition to a democratic state. Tunisia’s first democratically elected president Beji Caid Essebsi died in July 2019.

While Tunisia is often called the “success story” of the Arab Spring uprisings, a decade later, Tunisians have seen hard-won improvements in political freedoms, but a lagging economy and bureaucratic politics have stalled many of the protesters’ demands—and kept them in the streets. In March 2021 Tunisian Human Rights Activists have called for the release of youths incarcerated in January, which they say numbers more than 2,000.

Tunisia’s 2011 revolution sparked major advances in terms of freedom of expression and political freedoms but in 2021 the police and justice systems have seen few reforms. COVID 19 has made the Tunisian economy contract.

The U.S. Government supports Tunisia in its transition to democracy. In this effort, one of the United States’ priorities is to help Tunisia provide a secure environment conducive to the development of democratic institutions and practices, and inclusive economic growth. The US also supports Tunisia as it lays the foundation for political stability and economic prosperity, including efforts to strengthen civil society, empower youth, support economic reform, and create jobs.  Tunisia faces the challenges of strengthening the country’s nascent democratic institutions; facilitating constructive popular participation in the national political process; creating jobs, especially for youth, women, and college graduates; countering the threat of transnational terrorism and spillover from conflicts in neighboring countries; and managing increased demands on the national security forces.

Ambassador Blome met Prime Minister Hichem Mechichi to discuss U.S.-Tunisia bilateral cooperation, including the upcoming Millennium Challenge Corporation compact and the United States’ support to Tunisian efforts to secure COVID-19 vaccines for the Tunisian people. The Ambassador stressed the U.S.’ s unwavering commitment to fostering inclusive economic growth and sustaining Tunisia’s success as a pluralistic democracy. On 1 March 2021, U.S. Ambassador Blome joined the Minister of Education, Fethi Sellaouti, the President of the Independent High Authority for Elections, Nabil Baffoun, and the International Foundation for Electoral Systems (IFES) during a ceremony to celebrate the “Democracy Awakening Toolkit” that IFES produced as part of the U.S. Embassy-funded project.  This kit was produced and distributed throughout primary, preparatory and secondary schools in Tunisia, reaching more than 100.000 students.  The kit is a transformative educational method promoting democratic values and participatory citizenship among Tunisia’s youth.  Through more than $5 million in U.S. Embassy support since 2018, IFES has been able to support the ISIE and the Court of Accounts to ensure free, fair, and transparent elections in 2019.  On 16 March 2021, Ambassador Blome met with the Secretary General of the Tunisian General Labor Union, Mr. Noureddine Taboubi, to discuss empowering the Tunisian economy for the benefit of all Tunisians. The embassy also supports programs such as TechWomen 2020-2021 to provide resources and stimulate entrepreneurs in North Africa.

With this engaged diplomacy from experienced Diplomats, the Biden Administration can strengthen and assure Tunisia. This is a stabilizing influence that can prevent or stall conflicts like the one in Libya and strengthen Tunisia as a democratic anchor in North Africa.