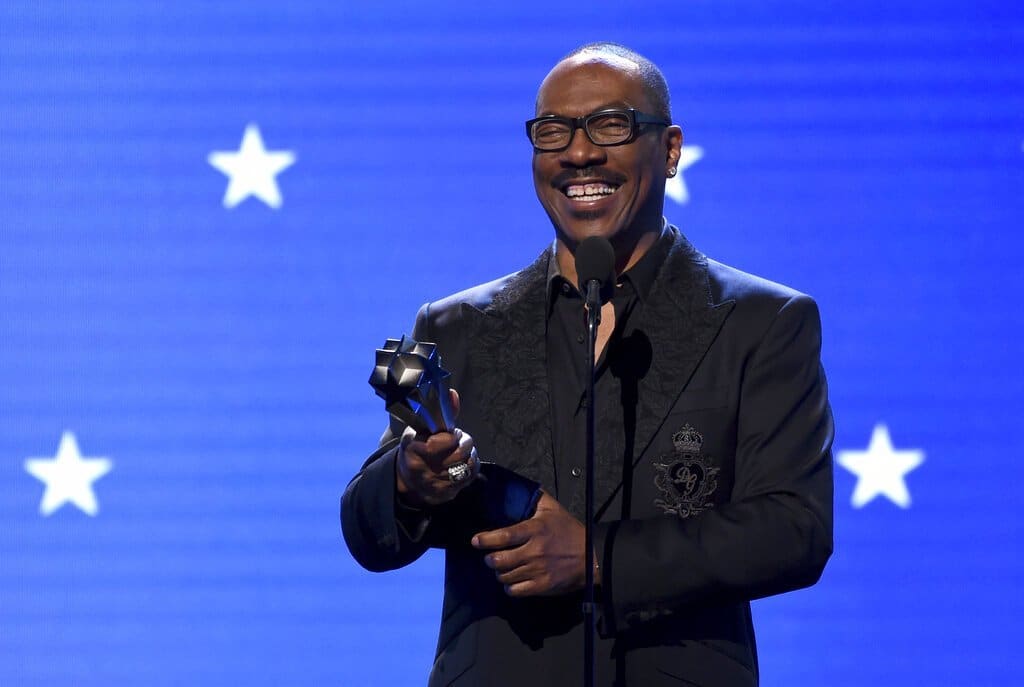 LOS ANGELES (AP) — Eddie Murphy was inducted into the NAACP Image Awards Hall of Fame at the organization’s show that highlighted works by entertainers and athletes of color.

“very moved” by the honor.

After Murphy accepted his induction award Saturday night, the actor-comedian said he was “very moved” by the honor. He was presented the award by his longtime friend and “Coming 2 America” co-star Arsenio Hall.

“I’ve been making movies for 40 years now … 40 years. This is the perfect thing to commemorate that and be brought into the hall of fame,” he said. “Thank you very much. I’m very moved.”

Murphy went on to send a message to Hall about his famous red leather suit from his 1983 stand-up special “Delirious.”

“My red suit was not that tight Arsenio,” Murphy said. “I get a lot of cracks about that red suit. When I was rocking that red suit, that (expletive) was fly.”

The hall of fame induction is bestowed on an individual who is viewed as a pioneer in their respective field and whose influence shaped the “profession for generations to come.”

Previous inductees include Oprah Winfrey, Stevie Wonder, Spike Lee, Ray Charles and Sidney Poitier. The most recent honorees to be inducted were Cheryl Boone Isaacs and Paris Barclay in 2014.

Murphy began his career as a stand-up comic while as a teenager and eventually joined the cast of “Saturday Night Live.” He starred in the box office hit “48 Hours” and made his mark in a slew of films such as “Beverly Hills Cop,” “Coming to America,” “The Nutty Professor,” “Dr. Dolittle” and “Dolemite Is My Name.” His latest film “Coming 2 America” was released on Amazon this month.

The awards ceremony virtually aired live on BET. It was also simulcast on CBS, MTV, VH1, MTV2, BET HER and LOGO.

The late Chadwick Boseman won best actor in a motion picture for his role in “Ma Rainey’s Black Bottom.” The actor, who also starred in the blockbuster Marvel film “Black Panther,” died at 43 last year after he privately battled colon cancer.

“As always, he would give all honor and glory to the most high God,” said the teary-eyed Simone Ledward Boseman, the actor’s wife, who accepted the award on his behalf. “He would thank his mom and dad. And he would give honor to his ancestors as we now honor him. Thank you, NAACP, for always giving him his flowers. He was an uncommon artist and an even more uncommon person.”

Boseman spoke about how common Black people have been diagnosed with or died from colon cancer. She urged Black people over the age of 45 to get screened.

“Don’t put it off any longer,” she said. “Please, get screened. This disease is beatable if you catch it in its early stages. So you don’t have any time to waste, even if you don’t have any family history. If you think nothing is wrong, and younger than 45, please be proactive about your health. Know the signs. Know your body. Listen to your body.”

LeBron James received the President’s Award for his public service achievements. He thanked the NAACP for recognizing his efforts beyond the basketball court.

The Los Angeles Lakers superstar was recognized for his efforts through his LeBron James Family Foundation and his I PROMISE School, a co-curricular educational initiative. Last year, he launched More Than a Vote — a coalition of Black athletes and artists — that is dedicated to educating and protecting Black voters.

James ventured into the entertainment realm with The SpringHill Company, which unites three companies he co-founded with Maverick Carter including athlete empowerment brand UNINTERRUPTED, film and television production company SpringHill Entertainment and The Robot Company, the brand and culture consultancy.

“This award is so much more than myself,” James said. “I’m here receiving it, but this dives into everything that I’m a part of.”

DJ D-Nice took home entertainer of the year in a competitive category against big names such as Regina King, Tyler Perry, Viola Davis and Trevor Noah.

During the pandemic’s early stage, D-Nice created a virtual remedy for anyone dealing with the lockdown blues. He hosted Homeschool at Club Quarantine on his Instagram Live, where he spun popular tunes on the turntables at his home. An array of celebrities tuned in: Rhianna, Oprah Winfrey and Mark Zuckerberg popped in for a listen.

“It’s been an honor to provide entertainment and inspiration during one of the darkest times we’ve experienced,” D-Nice said.

Michelle Obama presented Stacey Abrams with the first Social Justice Impact award. Abrams was honored for being a political force and her voting rights work that helped turn Georgia into a swing state.

Abrams paid homage to her parents for her upbringing.

“They taught me and my five siblings that having nothing was not an excuse for doing nothing,” she said. “Instead, they showed us by word and deed to use our faith as a shield to protect the defenseless, to use our voices to call out injustices, and to use our education and our time to solve the problems that others turn away from.”

Viola Davis took home best actress for her film and television roles in “Ma Rainey’s Black Bottom” and “How to Get Away with Murder.”