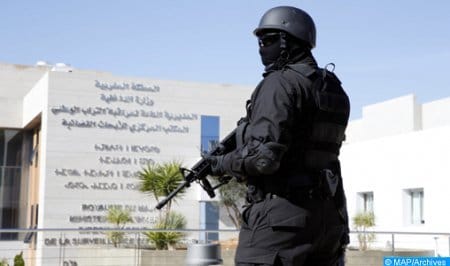 The U.S. is building a successful record of working with foreign nations on combating terrorism within those nations. This is important because if the extremism is not stopped overseas, it will likely spread to the U.S. Some key relationships have formed with countries in north Africa, including Morocco, Algeria, Tunisia, as well as Egypt and others like Saudi Arabia in the Middle East. Terrorist groups has doubled in the Sahel region of Africa in recent years, so figuring out better ways to combat it is essential.

This cooperation has resulted in the arrest of four extremists this week in the city of Oujda (Northeast Morocco) who are associated with an ISIS-linked terror cell, the Maghreb Arab Press MAP in Rabat reports. With assistance from U.S. intelligence services, two Moroccan agencies dismantled an ISIS-linked terror cell in the city of Oujda made up of four extremists. The Moroccan Central Bureau for Judicial Investigations (BCIJ) led the operation in close coordination with the General Directorate for Territorial Surveillance (DGST).

The agencies found that the members of the cell planned to carry out terrorist acts in the Kingdom against vital national structures, security buildings and military bases. They had visited the target sites and were seeking training in manufacturing explosives.

The suspects declared loyalty to the emir of the “Islamic state” and planned to carry out combat operations in the camps located in the region of Sahel, located in central and north-central Africa.

This “confirms once again the importance of international cooperation in the fight against terrorism and reflects the efficiency of distinguished partnerships in fighting against this scourge and violent extremism,” BCIJ stated.

Under the leadership of Abdellatif Hammouchi, the DGST has taken a more proactive, leading role in combating terrorism. Hammouchi frequently holds meetings with U.S. officials. In June 2020, the U.S. State Department commended Morocco’s efforts in counterterrorism and de-radicalization.

Morocco is a member of the U.S.-led Global Coalition to Counter ISIS. In October, the U.S. signed a 10-year agreement with Morocco for military development and cooperation. It provides for mutual intelligence sharing and free passage for U.S. vessels through coastal waters as well as improvements to the Moroccan military. The DOJ provides counter-terrorism training to Moroccan law enforcement and prosecutors.

Likely due to heightened efforts taken in northern Africa to combat ISIS, terrorist incidents have not increased in recent years there as much as they have throughout the rest of the continent. However, Libya is a jihadist hub, an unavoidable problem for those neighboring countries.

Morocco is seen as a “success story in fighting terrorism,” Ann Wainscott, an expert on Morocco’s war on terror and an assistant professor of political science at St. Louis University in Missouri, said in 2016. But due to its status as a top tourist destination, she said a balanced approach is necessary in order to avoid scaring off tourists, since tourists “may interpret arrests as indicating a broader presence of jihadists than actually exists.” Morocco’s approach of working with the U.S., the European Union and other countries on counterterrorism is proving so far to be working pretty well.