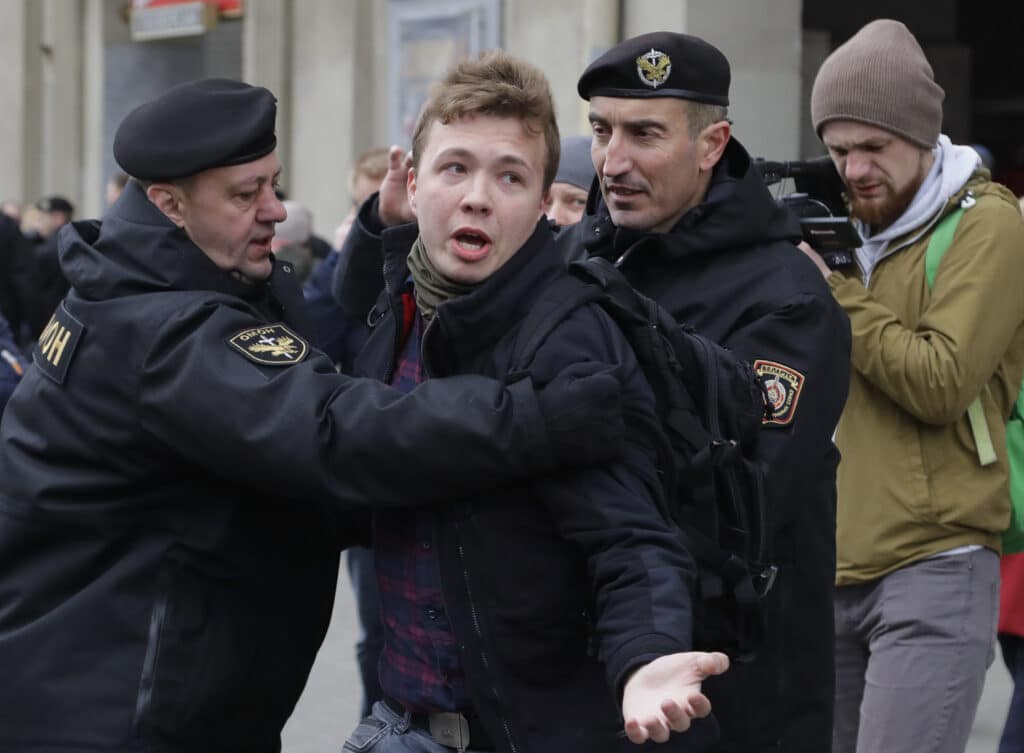 President Joe Biden, NATO, the EU and other Western entities are outraged that Belarus told a jet there was a bomb threat in order to get it to land in Belarus so they could arrest a journalist. They arrested Raman Pratasevich, who has been critical of Belarusian President Alexander Lukashenko, a dictator. The Associated Press has the story:

The US, EU acts with outrage over Belarusia tricking a plane to land so authorities could arrest a journalist

BRUSSELS (AP) — Western outrage grew and the European Union threatened more sanctions Monday against Belarus over its forced diversion of a passenger jet to the capital of Minsk in order to arrest an opposition journalist in a dramatic gambit that some said amounted to state terrorism or piracy.

Ryanair said Belarusian flight controllers told the crew there was a bomb threat against the plane as it was crossing through Belarus airspace on Sunday and ordered it to land. A Belarusian MiG-29 fighter jet was scrambled to escort the plane in a brazen show of force by President Alexander Lukashenko, who has ruled the country with an iron fist for over a quarter-century.

Belarus authorities then arrested passenger Raman Pratasevich, a 26-year-old activist, journalist and prominent critic who ran a popular messaging app that played a key role in helping organize massive protests against the authoritarian leader. Pratasevich and his Russian girlfriend were taken off the plane shortly after it landed, and authorities haven’t said where they’re being held. Ryanair Flight FR4978, which began in Athens, Greece, was eventually allowed to continue on to Vilnius, Lithuania.

U.S. President Joe Biden was briefed on the incident and National Security adviser Jake Sullivan raised the issue in his call with the secretary of the Russian Security Council, said White House press secretary Jen Psaki. She added the administration condemned what she called the “shocking act” of diverting a flight to detain a journalist.

“It constitutes a brazen affront to international peace and security by the regime. We demand an immediate international, transparent and credible investigation of this incident,” she said, adding the U.S. was in touch with NATO, the EU, the Organization for Security and Cooperation in Europe, among others about next steps.

‘Another blatant attempt to silence all opposition voices in the country’

EU leaders were particularly forceful in their condemnation of the arrest and the move against the plane, which was flying between two of the bloc’s member nations and was being operated by an airline based in Ireland, also a member.

The bloc summoned Belarus’ ambassador “to condemn the inadmissible step of the Belarusian authorities” and said in a statement the arrest was yet again “another blatant attempt to silence all opposition voices in the country.”

President Gitanas Nauseda of Lithuania urged the EU to take “clear actions in order to change the pattern of behavior of this very dangerous regime,” and said a previously planned EU summit on Monday would assess whether to close its airspace to Belarus carriers, declare Belarusian airspace as unsafe and expand sanctions against Lukashenko’s government.

German Chancellor Angela Merkel condemned the “unprecedented action” of the Belarusian authorities and demanded that Pratasevich and his girlfriend, Sofia Sapega, be released immediately.

EU leaders have tried to bring Belarus closer to the bloc — to encourage democratic reforms and reduce the influence of Russia — but have failed so far. Ahead of their summit, some EU leaders threatened more sanctions — from scrapping landing rights in the bloc for Belarus’ national carrier Belavia to exclusions from sports events.

British Transport Secretary Grant Shapps said he instructed the U.K. Civil Aviation Authority “to request airlines avoid Belarusian airspace in order to keep passengers safe.” He added he was suspending the permit allowing Belavia to operate in the U.K.

Ukraine President Volodymyr Zelenskyy ordered officials to move to cut the air link with Belarus and ban Ukrainian flights via the neighbor’s airspace.

US and EU have imposed sanctions on Belarusian officials

The U.S. and the EU have imposed sanctions on top Belarusian officials amid months of protests, which were triggered by Lukashenko’s reelection to a sixth term in an August 2020 vote that the opposition rejected as rigged. More than 34,000 people have been arrested in Belarus since then, and thousands beaten.

The Belarusian Foreign Ministry bristled at what it described as “belligerent” EU statements, insisting Minsk acted “in full conformity with international rules.”

It ordered all Latvian diplomats out of the country after the Belarusian flag was replaced Monday with the white-and-red one used by the opposition at the world ice hockey championship in Riga, Latvia. The event was moved from Minsk amid the international outcry over the crackdown.

Lufthansa said a flight from Minsk to Frankfurt with 51 people aboard was delayed Monday following a “security warning.” It was allowed to depart after the plane, passengers and cargo were searched.

On Sunday, flight tracker sites indicated the Ryanair flight was about 10 kilometers (6 miles) from the Lithuanian border when it was diverted. There were conflicting reports on what exactly happened.

Lukashenko’s press service said he had ordered a fighter jet to accompany the plane after being told of the bomb threat. Deputy air force commander Andrei Gurtsevich told Belarusian state TV that the Ryanair crew decided to land in Minsk, adding that the fighter jet was sent “to ensure a safe landing.”

But Ryanair said in a statement that Belarusian air traffic control instructed the plane to divert to the capital. The plane was searched, and no bomb was found.

In an apparent reference to the Belarusian security agency that still goes under its Soviet-era name KGB, O’Leary he told the Irish radio station Newstalk that he believes “some KGB agents offloaded from the aircraft” in Minsk.

Of the 126 people aboard the flight initially, only 121 made it to Vilnius, according to Rolandas Kiskis, chief of criminal police bureau in the Lithuanian capital where an investigation investigation has begun.

Passengers described Pratasevich’s shock when he realized the plane was going to Minsk.

“I saw this Belarusian guy with girlfriend sitting right behind us. He freaked out when the pilot said the plane is diverted to Minsk. He said there’s death penalty awaiting him there,” passenger Marius Rutkauskas said after the plane finally arrived in Vilnius. “We sat for an hour after the landing. Then they started releasing passengers and took those two. We did not see them again.”

Pratasevich was a co-founder of the Telegram messaging app’s Nexta channel, which played a prominent role in helping organize the anti-Lukashenko protests.

Nearly 2 million Belarusians in the nation of 9.3 million people have followed the channel, which has been the main conduit for organizing demonstrations and offered advice on how to dodge police cordons. It also has run photos, video and other materials documenting the brutal police crackdown on the protests.

Belarus authorities have labeled the channel “extremist” and charged Pratasevich in absentia of inciting mass riots and fanning social hatred. He could face 15 years in prison if convicted.

In November, the Belarusian KGB also put Pratasevich on the list of people suspected of involvement in terrorism, an ominous sign that he could face even graver charges. Terrorism is punishable by death in Belarus, the only country in Europe that maintains capital punishment.

Amid the international outrage, Moscow quickly offered a helping hand to its ally.

Russian Foreign Minister Sergey Lavrov said the episode needs to be investigated — but that it couldn’t be rushed. Moscow and Minsk have close political, economic and military ties, and Lukashenko has relied on Russian support amid Western sanctions.

In a previous diversion of a passenger flight, a United Airlines flight in 2004 from London to Washington carrying the singer Yusuf Islam, better known as Cat Stevens, was sent to Bangor, Maine, where FBI agents met the plane and sent him back to England. U.S. officials said he was denied access to the United States on national security grounds. He later was allowed into the U.S.

By RAF CASERT and VLADIMIR ISACHENKOV