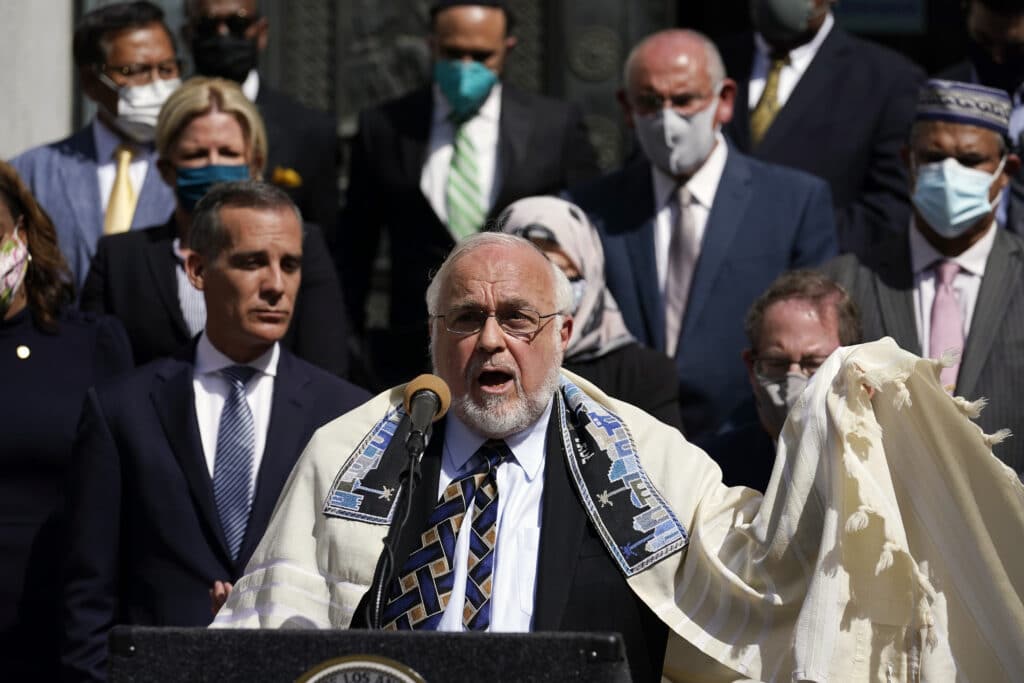 American Jewish groups brought together faith leaders, politicians and celebrities in a virtual Day of Action Against Antisemitism. Some spoke out at an event in Los Angeles, while many participated virtually. The Associated Press has the story:

Day of Action Against Antisemitism takes place after Israeli-Gaza conflict

(AP) Faith leaders, celebrities and lawmakers across the political spectrum joined Thursday to condemn a rise in antisemitic incidents around the world triggered by the recent conflict between Israel and Gaza’s militant Hamas rulers.

Organized by leading U.S. Jewish groups, the virtual Day of Action Against Antisemitism included calls for policy changes and a unified stand against antisemitism in America. Among the participants were Rabbi Moshe Hauer, executive vice president of the Orthodox Union; top leaders on Capitol Hill; and Roman Catholic Cardinal and New York Archbishop Timothy Dolan.

“In the last few weeks, we have seen a disturbing spike in bigotry and violence against Jewish communities across the country and around the world,” House Speaker Nancy Pelosi said. “This hatred is horrific and heartbreaking.”

“Americans must come together with urgency and unity to condemn these appalling acts of hatred. … It is our moral duty to confront this evil wherever and whenever it arises,” she added.

Preliminary data compiled by the Anti-Defamation League shows an increase in antisemitic attacks, vandalism and harassment around the world and online, sparked by the 11-day war that ended with a cease-fire last week.

“We are living through some treacherous times as we’ve seen this rise of antisemitic acts in the past weeks,” said Jonathan Greenblatt, CEO of the ADL. “They have been brazen and brutal, affecting our family members and friends, our colleagues and neighbors and all of us in the Jewish community.

“We know it’s scary,” Greenblatt said, “but also know this: We are steadfast in our commitment to fight anti-Jewish hate, whenever and wherever it happens.”

Incidents that have raised concerns include the yelling of antisemitic remarks at a rabbi in front of a South Florida synagogue by a man who later returned to dump a bag of human feces there; an attack on diners and the chasing of a man in a heavily Jewish neighborhood of Los Angeles; and a gang assault against a Jewish man in New York City, where pro-Israel and pro-Palestinian demonstrators clashed in Times Square.

“Bigots are trying to make our Jewish brothers and sisters live in fear in their own homes, on their own streets, in their own places of worship,” Senate Minority Leader Mitch McConnell said Thursday. “… In America we have the right to speak out forcefully against intolerance, and it’s not just our right, it’s our duty.”

His political rival across the aisle, Senate Majority Leader Chuck Schumer, agreed that antisemitism has no place in the United States and combating it “is not a partisan issue.”

Elana Broitman, head of public affairs for the Jewish Federations of North America, hopes for concrete steps such as naming more people in the Biden administration to focus on combating antisemitism and getting more government funding to safeguard synagogues and other houses of worship.

“Whether it’s us, whether it’s the Asian American community, the African American churches that have been attacked, Sikh temples, etc., this is important to all of us,” she said ahead of the rally.

The event also featured statements of support by Muslim and Christian leaders, including a prayer led by Cardinal Dolan.

“Indifference is our enemy, and we Catholics cannot be indifferent to the suffering of our Jewish brothers and sisters,” said Dolan, who plans to attend a special Shabbat service Friday at New York’s Temple Emanu-El. “And we’re honored and enthusiastic in standing in solidarity with you and acting against antisemitism.”

TV host and producer Nick Cannon, who last year apologized for making what he called “hurtful and divisive” antisemitic comments, also spoke against hatred and discrimination.

“As someone who has dealt with my own outspokenness, over the last year,” Cannon said, “I’ve learned a lot about how hurting other people is never going to help the overall idea of bringing us all together on this planet that we have.”