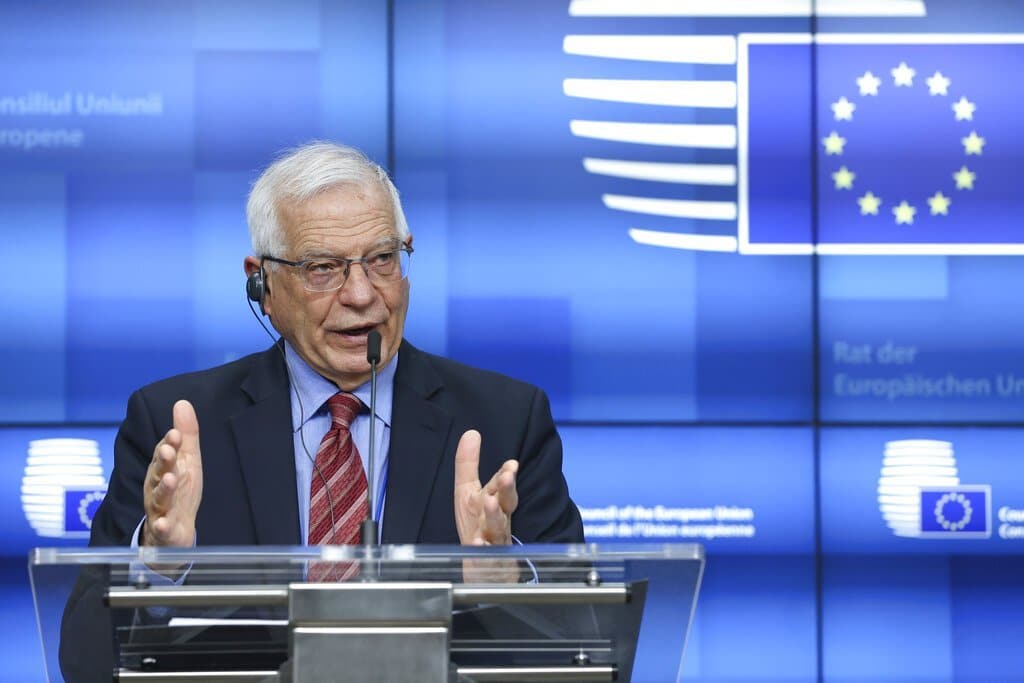 Frustrated with new sanctions imposed on the country by Western nations, China admonished foreign diplomats. The authoritarian regime told them they would “pay the price for their folly and arrogance.” The Associated Press covered the story:

Chinese Foreign Ministry spokesperson Hua Chunying on Tuesday called the new sanctions a “slander and an affront to the reputation and dignity of the Chinese people.”

“I admonish them that they should not underestimate the firm determination of the Chinese people to defend their national interests and dignity, and they will pay the price for their folly and arrogance,” Hua told reporters at a daily briefing.

Both China and Russia denounced the sanctions and criticism

That came hours after the Chinese and Russian foreign ministers denounced a new wave of criticism and sanctions against both countries over human rights.

At a news conference in the southern Chinese city of Nanning, China’s Wang Yi and Russia’s Sergei Lavrov rejected outside critiques of their authoritarian political systems and said they were working to further global progress on issues from climate change to the coronavirus pandemic.

“Countries should stand together to oppose all forms of unilateral sanctions,” Wang said. “These measures will not be embraced by the international community.”

Russia is also under Western sanctions over human rights abuses and military aggression against Ukraine. Lavrov said Russia’s ties with China grew stronger as Moscow’s relations with the EU suffered damage, while accusing the West of “imposing their own rules on everyone else, which they believe should underpin the world order.”

“If Europe broke these relations, simply destroying all the mechanisms that have been created for many years … then, probably, objectively, this leads to the fact that our relations with China are developing faster than what’s left of relations with European countries,” Lavrov said.

In a joint statement issued after the meeting, the two ministers said no country should seek to impose its form of democracy on others.

“Interference in a sovereign nation’s internal affairs under the excuse of ‘advancing democracy’ is unacceptable,” the statement said.

China says members of the Uyghur and other Muslim minority groups in Xinjiang have voluntarily taken part in job training and de-radicalization courses, denying charges that more than 1 million have been locked up in prison-like reeducation camps where they are forced to reject their native culture and pledge loyalty to the ruling Communist Party and its leader Xi Jinping. Media outlets, foreign governments and activist groups say abuses, including forced labor and coerced birth control, are ongoing.

The Australian and New Zealand governments reiterated their grave concerns about the growing number of credible reports of severe human rights abuses in Xinjiang. The two, whose economies are heavily reliant on trade with China, have not imposed sanctions themselves.

Related: Russia Expelling US Diplomats In Response To Biden

“We share these countries’ deep concerns, which are held across the Australian and New Zealand communities,” Australian Foreign Minister Marise Payne and her New Zealand counterpart Nanaia Mahuta said in a joint statement.

“Today, we underscore the importance of transparency and accountability, and reiterate our call on China to grant meaningful and unfettered access to Xinjiang for United Nations experts, and other independent observers,” the statement added.

British Foreign Secretary Dominic Raab said the multi-national measures were part of “intensive diplomacy” by the U.K., the United States, Canada and the 27-nation EU to force action amid mounting evidence of serious rights abuses against Uyghurs. The sanctions will be imposed immediately and include travel bans and asset freezes against four officials, Raab said.

U.S. Secretary of State Antony Blinken said in a statement the united response “sends a strong signal to those who violate or abuse international human rights, and we will take further actions in coordination with likeminded partners.”

Sanctions have also been imposed by the U.S. on Chinese and Hong Kong officials accused of rolling back freedoms in the former British colony that was handed over to Chinese rule in 1997. Britain has offered residency and a path to citizenship to millions born before the handover, further infuriating the authorities in Beijing.

Beijing swiftly responded to Monday’s move by the EU by in turn slapping sanctions on 10 European individuals and four institutions that it said had damaged China’s interests and “maliciously spread lies and disinformation.”

Germany on Tuesday summoned the Chinese ambassador in Berlin to complain about the move, saying sanctions against EU lawmakers, scientists, political institutions and non-governmental organizations represented “an unreasonable escalation that will unnecessarily strain relations between the EU and China.”

By ROD McGUIRK and KEN MORITSUGU

McGuirck reported from Canberra, Australia. Frank Jordans in Berlin contributed to this report.