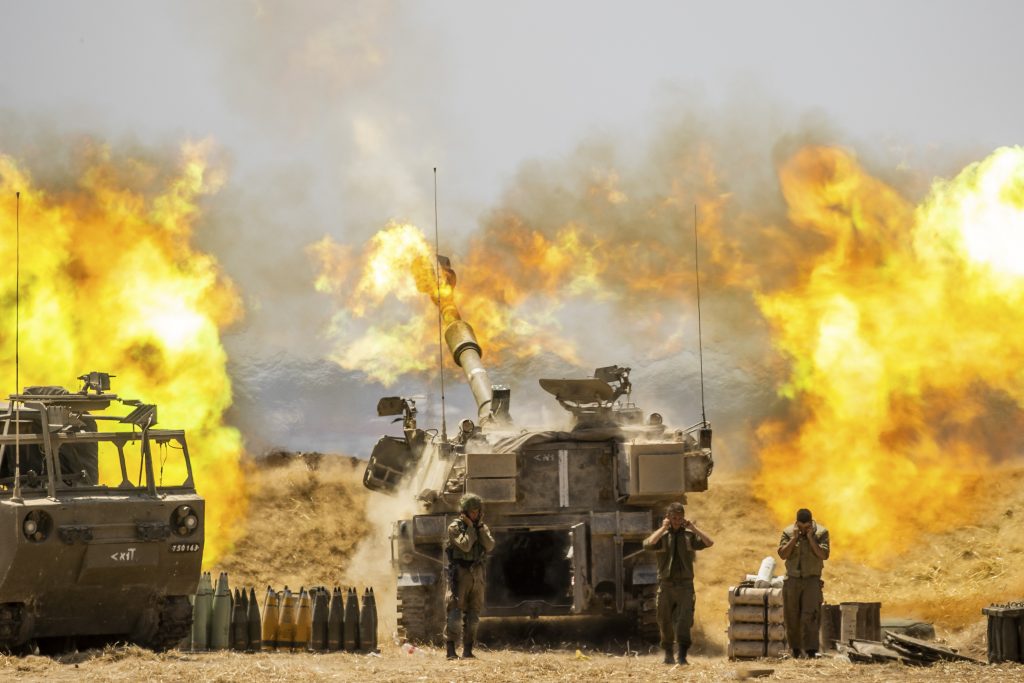 The latest conflict in Israel with the Palestinians looks a lot like the 2014 Gaza war but with one big difference: significant involvement by Palestinians living in Israel and counterviolence by Jewish Israelis. With 65 Palestinians in Gaza killed, there are no signs of slowing as Israeli Prime Minister Benjamin Netanyahu vows to expand the offensive and Hamas calls for a full-scale intifada. The Associated Press has the story:

GAZA CITY, Gaza Strip (AP) — Israel killed a string of senior Hamas military figures Wednesday and pounded three multistory towers as it hammered the Gaza Strip with airstrikes and militants in the territory fired rocket barrages. Dozens have died in the worst violence since a 2014 war, with no resolution in sight.

The fighting has taken on many hallmarks of that devastating 50-day conflict between Israel and Hamas, but with a startling new factor: a burst of fury from Israel’s Palestinian citizens in support of those living in the territories as well as counterviolence by Jewish Israelis.

Opinion: Death of 2-State Solution at the Hands of a 3-State Situation

In response, Israel deployed border guards in two mixed Arab-Jewish cities that saw unrest in previous days, including the burning of a Jewish-owned restaurant and a synagogue, the fatal shooting of an Arab man and attacks on Arab-owned cars. It was a rare use of the paramilitary force, which normally puts down protests by Palestinians in the West Bank and east Jerusalem.

There was no sign that either side is willing to back down. Prime Minister Benjamin Netanyahu has vowed to expand the offensive, saying it “will take time.” Hamas has called for a full-scale intifada, or uprising. The last such uprising began in 2000 and lasted more than five years.

The latest eruption of violence began a month ago in Jerusalem, where heavy-handed police tactics during the Muslim holy month of Ramadan and the threatened eviction of dozens of Palestinian families by Jewish settlers ignited protests and clashes with police. A focal point was the Al-Aqsa Mosque compound, a site sacred to Jews and Muslims.

Hamas, claiming to be defending Jerusalem, launched a barrage of rockets at the city late Monday, escalating the ground tensions into a new Israel-Hamas punching match.

Since then, militants have fired more 1,050 rockets from Gaza, according to the Israeli military, and Israel has conducted hundreds of strikes in the tiny territory where 2 million Palestinians have lived under a crippling Israeli-Egyptian blockade since Hamas took power in 2007. Two infantry brigades were sent to the area, indicating preparations for a possible ground invasion.

On Wednesday, Israel stepped up its targeting of Hamas’ military wing. The military and internal security agency said they carried out a “complex and first-of-its-kind operation” that killed the Hamas commander in charge of Gaza City, the highest-ranking Hamas military figure killed by Israel since 2014, and several other senior militants involved in rocket production.

In one of the fiercest attacks, Israeli fighter jets dropped two bombs on a 14-story building in Gaza City, collapsing it. The building, located on the busiest shopping street in the Roman neighborhood, housed businesses in addition to offices for Hamas’ Al-Aqsa satellite channel.

Soon after, Hamas fired 100 rockets at the Israeli desert town of Beersheba in what it said was retaliation.

Samah Haboub, a mother of four in Gaza, said she was thrown across her bedroom in a “moment of horror” by an airstrike on an apartment tower next door. She and her children, ages 3 to 14, ran down the stairway of their apartment block along with other residents, many of them screaming and crying.

“There is almost no safe place in Gaza,” she said.

One strike hit a taxi in Gaza City, killing a man, woman and driver insider, and a second strike killed two men nearby on the street, witnesses who brought the bodies told The Associated Press at the hospital. Several other bystanders were wounded.

In the Israeli city of Lod, a 52-year-old Arab Israeli citizen and his 16-year-old daughter were killed when a rocket from Gaza hit the courtyard of their home. An Israeli soldier was killed in a strike by an anti-tank missile from Gaza.

The Jerusalem turmoil and the ensuing battle come at a time when the long-stalled Israeli-Palestinian peace process is virtually non-existent, fueling Palestinian frustration.

It has been seven years since the two sides held formal negotiations. Israel’s political scene pays little attention, and the peace process was hardly an issue in the country’s recent elections. Arab nations, including several that recently reached normalization deals with Israel, rarely push for any resolution.

The result has left the nearly 5 million Palestinians in the West Bank, Gaza Strip and east Jerusalem living in a limbo.

Now the recent fighting has unleashed protests in Arab communities in Israel.

“An intifada erupted in Lod, you have to bring in the army,” the central Israeli city’s mayor, Yair Revivo, said. Lod saw heavy clashes after thousands of mourners joined a funeral for an Arab man killed the previous night, the suspect a Jewish gunman.

With the deployment of border guards in Lod and the coastal city of Acre, Netanyahu warned that he was prepared to use “an iron fist if necessary,” and urged Arab Israeli leaders to bring calm.

Still unclear is how this new outburst of fighting will effect Netanyahu’s political future. He failed to form a government coalition after inconclusive parliamentary elections in March, and now his political rivals have three weeks to try to form one.

The longer the fighting drags on, the more it could hamper their attempts at a coalition. It could also boost Netanyahu if yet another election is held, since security is his strong suit with the public.

Israel and Hamas have fought three wars since the Islamic militant group seized power in Gaza from rival Palestinian forces. The conflicts ended after regional and international powers persuaded both sides to accept an informal truce.

Israel faced heavy criticism over the bombing of residential buildings in Gaza during the 2014 war, one of several tactics that are now the subject of an investigation by the International Criminal Court into possible war crimes. Israel is not a member of the court and has rejected the probe.

In a brief statement, ICC prosecutor Fatou Bensouda said she had noted “with great concern” the escalation of violence and “the possible commission of crimes under the Rome Statute” that established the court.

But Israel has said it has no choice because Hamas fires rockets from residential areas. Hamas has also come under international criticism over its indiscriminate rocket fire at Israeli population centers.