Dems and GOP clash in Congress over Jan. 6 incident 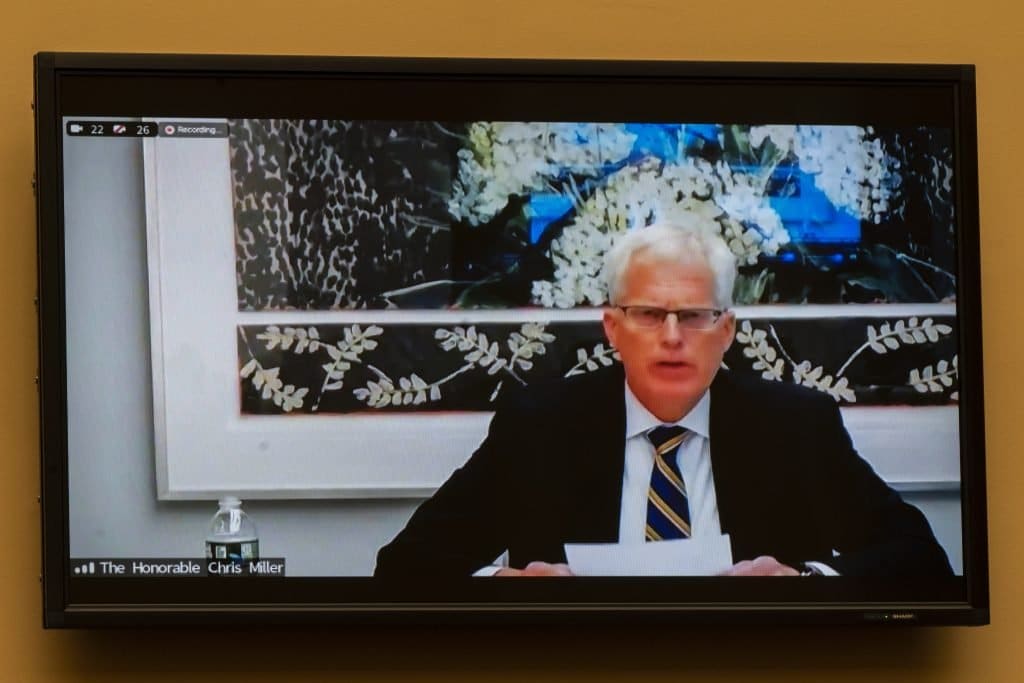 The House Oversight Committee is holding a hearing on the violence that occurred on January 6 at the U.S. Capitol, and Republicans and Democrats are viciously attacking each other over their opinions of what took place. Former acting Defense Secretary Christopher Miller and former acting Attorney General Jeffrey Rosen testified, defending their agencies. The Associated Press has the story:

WASHINGTON (AP) — Republicans sought to rewrite the history of the Jan. 6 insurrection during a rancorous congressional hearing Wednesday, painting the Trump supporters who attacked the Capitol as patriots harassed by law enforcement and downplaying repeatedly the violence of the day.

Democrats, meanwhile, clashed with Donald Trump’s former Pentagon chief about the unprepared response to a riot that began when hundreds of Trump loyalists bent on overturning the election broke through police barriers, smashed windows and laid siege to the building.

The colliding lines of questioning, and a failure to settle on a universally agreed-upon set of facts, underscored the challenges Congress faces as it sets out to investigate the violence and government missteps. The House Oversight Committee hearing unfolded just after Republicans in the chamber removed Rep. Liz Cheney from her leadership post for rebuking Trump for his false claims of election fraud and his role in inciting the attack.

Former acting Defense Secretary Christopher Miller and former acting Attorney General Jeffrey Rosen, testifying publicly for the first time about Jan. 6, tried to defend their respective agencies’ responses to the chaos. But the hearing almost immediately devolved into partisan bickering about how that day unfolded, with at least one Republican brazenly stating there wasn’t an insurrection at all.

“I find it hard to believe the revisionist history that’s being offered by my colleagues on the other side,” Rep. Stephen Lynch, a Massachusetts Democrat, proclaimed in exasperation. Other Democrats made similar accusations, with Rep. Jamie Raskin of Maryland urging his Republican colleagues to stop with the “evasions” and “distractions.”

The violence of that day is well-established, particularly after an impeachment trial that focused on the clashes between rioters and police that left officers beaten and bloodied, including one who was crushed between a door and another shocked with a stun gun before he had a heart attack. Some of the insurrectionists threatened to hang then-Vice President Mike Pence and menacingly called for House Speaker Nancy Pelosi in an apparent effort to find her.

But Republican lawmakers on the committee sought to refocus the hearing’s attention away from those facts, repeatedly equating the insurrection with violence in American cities last summer that arose from racial justice protests that they said Democrats had failed to forcefully condemn. Rep. Andy Biggs of Arizona played video footage of violence outside the federal courthouse while Rep. Andrew Clyde of Georgia said that while “there were some rioters” on Jan. 6, it was a “bald-faced lie” to call it an insurrection.

In ways that clearly rewrote the facts of the day and the investigations that resulted, Rep. Paul Gosar of Arizona said the Justice Department was “harassing peaceful patriots.” He described a California woman who was fatally shot by an officer during the insurrection after climbing through the broken part of a door as having been “executed,” even though prosecutors have said the officer won’t be prosecuted because the shooting did not break the law.

“It was Trump supporters who lost their lives that day, not Trump supporters who were taking the lives of others,” said Rep. Jody Hice of Georgia, overlooking that loyalists to the president instigated the riot, smashing through windows and spraying officers with pepper and bear spray.

Democrats bristled at the Republican characterization of the violence, with Rep. Ayanna Pressley of Massachusetts saying: “This was a violent white supremacist mob who assaulted the nation’s Capitol. It was a deadly and dangerous insurrection that was incited by Donald Trump.”

Dozens of police officers were injured, who may never return to duty

One Capitol Police officer who was injured while confronting rioters suffered a stroke and died a day later of natural causes. Dozens more were severely injured, some of whom may never return to duty.

Democrats clashed with Miller repeatedly over the hours-long gap between when the National Guard was first requested and the time troops arrived. Rep. Ro Khanna of California told Miller he was dumfounded “we had someone like you in that role.” After Miller described a line of questioning from Lynch as ridiculous, the congressman shot back that Miller was ridiculous.

In testimony aimed at rebutting broad criticism that military forces were too slow to arrive even as the pro-Trump rioters violently breached the building and stormed inside, Miller told the committee he was concerned before the insurrection that sending troops to the Capitol could fan fears of a military coup and cause a repeat of the deadly Kent State shootings in 1970.

“No such thing was going to occur on my watch, but these concerns, and hysteria about them, nonetheless factored into my decisions regarding the appropriate and limited use of our armed forces to support civilian law enforcement during the Electoral College certification,” Miller said. “My obligation to the nation was to prevent a constitutional crisis.”

Miller said that though military involvement in domestic law enforcement should be a “last resort,” he regarded the speed at which the Defense Department moved on Jan. 6 as a success. He said he stood by each decision he made that day.

He said that though Trump had encouraged his supporters to protest the election results, he did not believe Trump’s rhetoric — which led to his impeachment — was the “unitary” factor in the riot. This drew complaints from Democrats, who said Miller appeared to be softening criticism of Trump that he voiced in earlier media interviews.

Trump was ultimately acquitted by the Senate of having incited the riot.

Miller denied that Trump had any involvement in the Defense Department’s response, saying the two of them did not speak that day. But Democrats made clear their focus on Trump and his role in the riot.

″The failures of Jan. 6 go beyond the craven lies and provocations of one man,” said Rep. Carolyn Maloney, a New York Democrat and the committee’s chairwoman.

Rosen in his testimony defended the Justice Department’s preparation and also said there was no evidence of widespread election fraud that could have caused the results to be voided. His former boss, William Barr, has said the same.

By ERIC TUCKER and MICHAEL BALSAMO