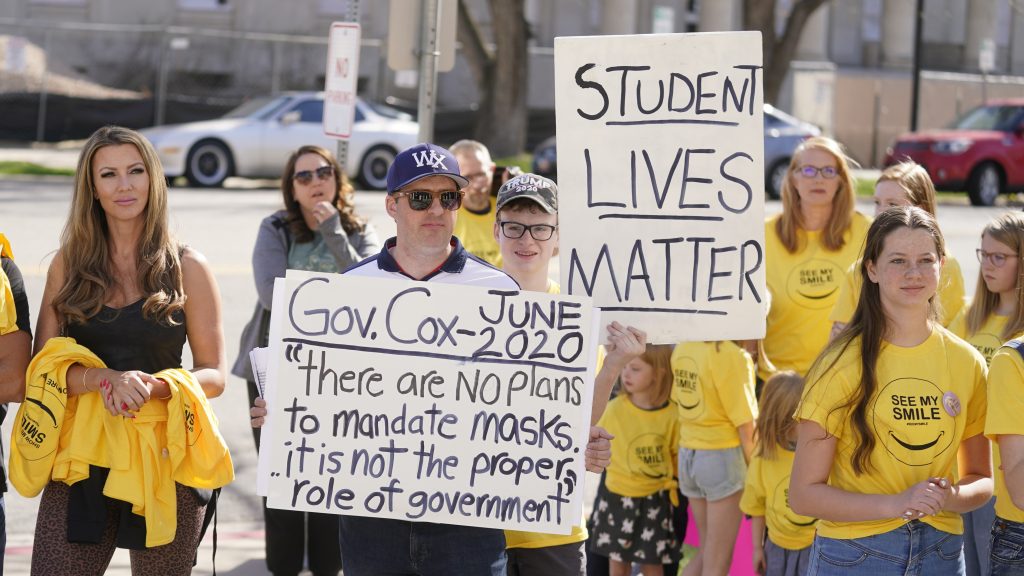 There have been some contentious debates at school meetings with parents, educators and school board members, but a trend is finally starting to remove mask mandates for students. With masks optional, the debates continue. The Associated Press has the story:

Although masks at schools are becoming voluntary, fights continue

(AP) As a lengthy, bitter fight over mask requirements for students neared its conclusion, the chairperson of a Florida school board announced that she would agree to lift a mandate that had been in place since September even though she preferred leaving it in place until the end of the academic year. Parents hurled insults in response.

“Communist! Democrat!,” opponents of making children wear masks in school shouted as board chair Wei Ueberschaer and the district superintendent explained at a May 3 meeting that they still considered masks advisable. “This is Santa Rosa County, America, not China!”

Moments later, the Santa Rosa school board voted unanimously to make masks optional for all grades effective immediately, joining dozens of other U.S, communities in declaring that masks were or would soon no longer be mandatory for students.

Breaking: NYC Schools to All Open in Person This Fall

The debates have been emotional and highly divisive around the country, in some cases leading to the involvement of police. A few beleaguered school boards, caught between the demands of anti-mask parents and the appeals of employee unions, eliminated student mask rules only to reverse or revise the decisions. Where many see a continued need to protect children who aren’t vaccinated against COVID-19, opponents argue that masks make students uncomfortable and mandates impinge on freedom.

“The mask is a personal choice, and I wore it at the beginning, but I just decided that it wasn’t about the mask anymore,” said Cynthia Licharowicz, a Milton, Florida, parent who opposed Santa Rosa County’s rule. “So I decided to take it off, and I wanted my child to have the same choice.”

The dustups highlight competing risk narratives 14 months into the pandemic: Even as a number of U.S. schools remain closed to minimize infections, districts in states from Alabama to Wyoming decided to ditch student mask mandates. Many more are likely to do the same before the next school year starts, despite the Centers for Disease Control and Prevention’s guidance that schools “should prioritize universal and correct use of masks and physical distancing.”

Some public health experts are alarmed. While the Food and Drug Administration this week approved Pfizer’s COVID-19 vaccine for children as young as 12, it’s unlikely that many young adolescents will be vaccinated before the end of the academic year. Data from the CDC shows infection rates among U.S. residents ages 14-17 are now higher than for Americans, while the rates among children 6-13 are getting closer to the national average.

In Arkansas, a law will make it illegal by the end of the summer for schools or any government entity to require masks. On Wednesday in South Carolina, schools Superintendent Molly Spearman dropped a statewide student mask mandate but said Gov. Henry McMaster had no legal basis for an order letting parents choose for their children whether or not to wear masks. Spearman said districts could continue to apply their own mask.

Many parents in school districts where masks have become voluntary are concerned.

“I am so frustrated….I don’t see any harm in wearing masks, and there is potential harm in not wearing a mask,” said Christie Black, the mother of a kindergartner and a third grader in Mesa, Arizona, who was puzzled by the decision of the state’s largest school district to make masks optional indoors starting earlier this month.

There’s little U.S. data about the spread of the coronavirus in schools where students didn’t wears masks since most reopened schools required them, said Adam Hersh, a professor of pediatric infectious diseases at the University of Utah. Mask supporters point to worrying examples, including high transmission at a maskless summer camp in Georgia.

Evidence from earlier in the pandemic found children less likely than adults to be infected with the coronavirus and less likely to become seriously ill from COVID-19. The CDC has said that while schools haven’t been associated with substantial spread, outbreaks in schools not following infection-prevention measures “tend to result in increased transmission among teachers and school staff rather than among students.”

Black continues to send her two children to school with masks but says “they flung their masks off” as soon as they saw classmates no longer covering their faces.

“I feel like because the governor and the school board caved to peer pressure, it’s now up to my children not to cave to peer pressure,” Black said. “It just feels like we’re more concerned with our own freedom and rights than doing what’s best for the most vulnerable.”

Parents and teachers at odds over masks

In Santa Rosa, east of Pensacola, mask opponents dominated public debate even though surveys of parents and teachers showed divided opinions in the 28,000-student district. A small majority of teachers wanted to require masks at least through the end of the school year, while a small majority of parents wanted the requirement lifted immediately.

The school board’s April 20 discussion about the issue nonetheless grew so heated that sheriff’s deputies escorted multiple attendees out of the meeting, including at least one who was shouting profanities at board members.

Jennifer Hensley, a Santa Rosa County parent and middle school teacher, was the only member of the public at the meeting who spoke in favor of keeping the mask mandate versus the 18 who spoke against the requirement. She said she was worried about the health of her fellow teachers and of her 15-year-old daughter, who has an autoimmune disorder.

“The atmosphere was so charged,” Hensley recalled later. “I don’t think they were expecting that level of emotion to be involved.”

Smead said her fifth-grade daughter was repeatedly isolated in the school office for refusing to wear a mask and eventually obtained a medical exception allowing her to forego a face covering. Smead declined to state the medical reason.

Santa Rosa County district leaders emphasized they were following public health guidance, but state officials undercut that position even as public pressure built locally. On April 29, Florida Surgeon General Scott Rivkees rolled back a series of health advisories that had been cited by the Santa Rosa district. So the school board called the May 3 meeting at which its five members voted to revoke the mask mandate.

“I still strongly recommend the use of face masks, especially for those who are not fully vaccinated,” board chair Ueberschaer said before the vote, raising her voice to be heard over shouting parents. “My hope is that the families will have a conversation with their children that face masks are now a personal choice, and that students should respect the choice of their peers.”

Some of the insults hurled at Ueberschaer, a longtime school volunteer who is of Asian descent. included references to China.

“It truly does make me sad that face masks have morphed from a virus-prevention strategy to a political statement,” she said.