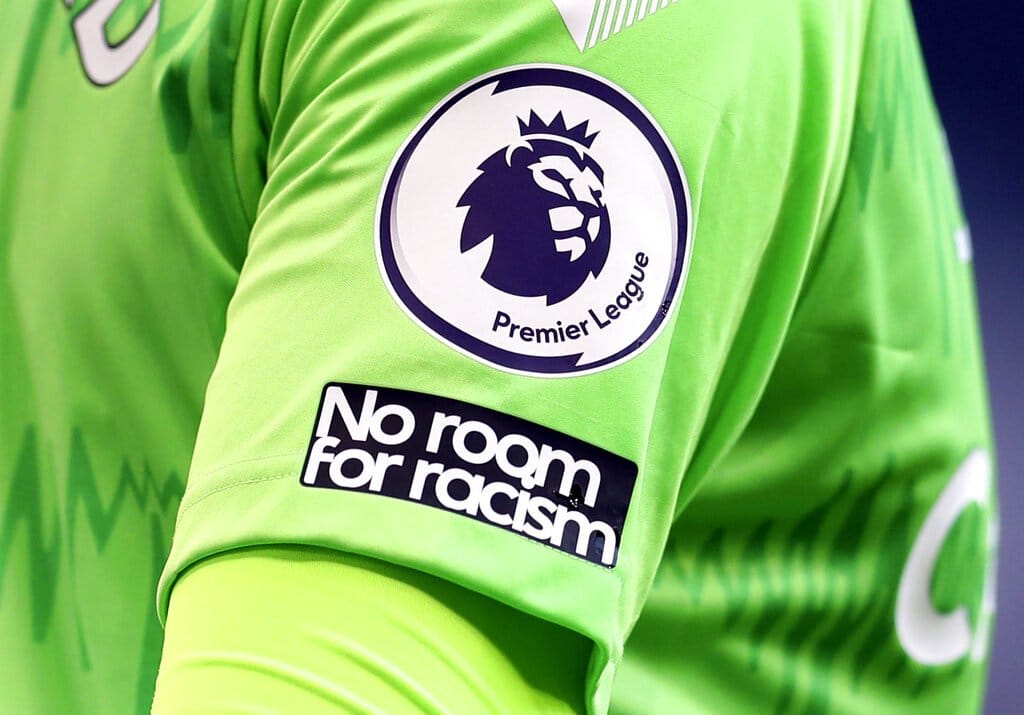 Various English soccer teams began four days of silence on social media in response to racism directed at the teams. Other sports including cricket, rugby, tennis and horse racing agreed to join the boycott. The effort began in 2019 with a 24-hour effort called the “Enough” campaign, but hasn’t completely snuffed out the racist attacks. The Associated Press has the story:

There will be no goal clips, lineup announcements, banter between clubs or even title celebrations.

Four days of silence across Twitter, Facebook and Instagram by soccer leagues, clubs and players in England began on Friday in a protest against racist abuse that has been adopted more widely.

Such is the anger across the game, it means that if Manchester City clinches the Premier League on Sunday it will not celebrate the title on social media.

There was initially a joint boycott announcement by the English Football Association, English Premier League, English Football League, Women’s Super League, Women’s Championship as well as player, manager and referee bodies, anti-discrimination group Kick It Out, and the Women In Football group. Ahead of the boycott which began at 1400 GMT on Friday through 2259 GMT on Monday, other English sports including cricket, rugby, tennis and horse racing said they would fall silent on social media. FIFA, UEFA and the Premier League’s British broadcasters also said they wouldn’t post online across four days.

Prince William, who is president of the FA, said on the Kensington Palace Twitter account he would be joining the boycott. Formula One champion Lewis Hamilton, who is the only Black driver on the grid, announced he wouldn’t post during the Portuguese Grand Prix weekend to help “make a difference for future generations.” The International Tennis Federation joined the boycott in the hope it stops vile abusive messages, including death threats, being sent to players, coaches and officials.

The English players’ union led a move to boycott social media for 24 hours in 2019 — called the “Enough” campaign — to demand tougher action to stop hatred being sent online to their members. It hasn’t come, with no zero tolerance. For Facebook-owner Instagram, a racist post isn’t enough to get a user immediately suspended.

“It’s dreadful,” said Simone Pound, head of equalities at the Professional Footballers’ Association (PFA). “When we first went to them after the Enough campaign I had reams and reams of the examples of the abuse players are receiving. We had (Leicester captain) Wes Morgan in the room talking from a personal level. There was the N-word everywhere, monkey emojis everywhere and they were like, ‘We’re really sorry. It doesn’t contravene our community guidelines.’”

Not much has improved after two years, according to Pound.

“Since we first met with them, they appreciate that isn’t a good enough response or answer,” Pound said. “However, we are still seeing and know that those words, those emojis are being used in a horrific way, daily to players and they aren’t always being taken down quickly. Sometimes they are still up six months after being reported.”

The PFA found that 31 out of 56 racist and discriminatory tweets remain live on Twitter as of Thursday despite reporting them last year. Like Facebook, Twitter would not provide anyone for interview to discuss claims they are strengthening moves to remove discriminatory content and abusive users.

A study by the anti-discrimination Fare network with Belgium-based artificial intelligence company Textgain found that 157 players involved in the quarterfinals of the Champions League and Europa League last August received discriminatory abuse on Twitter. Six months later, 66% of discriminatory tweets remained online as did 71% of the accounts, Fare said, pointing out that while ethnic minority players receive more racist abuse, there is homophobic abuse sent to players across the game.

The British government is introducing a law to address online safety that could lead to social media companies being fined for failing to crack down on racism.

“We could see fines of up to 10% of annual global turnover,” Culture Secretary Oliver Dowden wrote in Friday’s edition of The Sun newspaper. “For a company such as Facebook or YouTube, that could be billions.”

The boycott started as managers were holding news conferences ahead of the weekend’s matches.

Nuno Espirito Santo of Wolverhampton, who is the only Black manager in the Premier League, flagged issues about withdrawing from public information platforms.

“Not everyone on social media uses it badly,” he said of the boycott. “You have to balance and we can’t compromise our freedom, but at the moment I think it’s a good measure.”

The abuse Tottenham interim coach Ryan Mason received was after he suffered a fractured skull which forced him to retire at age 26 in 2018.

“I had to zone out of it and had to take myself off social media as a player because I didn’t want to see it,” Mason said. “Even after I retired I’d get messages about my injury and certain things, and you almost think it’s another message and I’ll just ignore it. But these things shouldn’t be acceptable.”

Manchester United announced on Friday that six fans have been banned for racially abusing Tottenham forward Son Heung-min on social media. United also found in a review of Twitter, Instagram and Facebook that 3,300 abusive posts were aimed at its players from September 2019 to February 2021. Chelsea also said on Friday that a supporter had been banned for 10 days for antisemitic posts.

The PFA is preparing for more blackouts on social media.

“I personally feel this could be the first of a series of boycotts,” Pound said. “We can do this every week if we have to. This is not going away. They have to listen to us.”